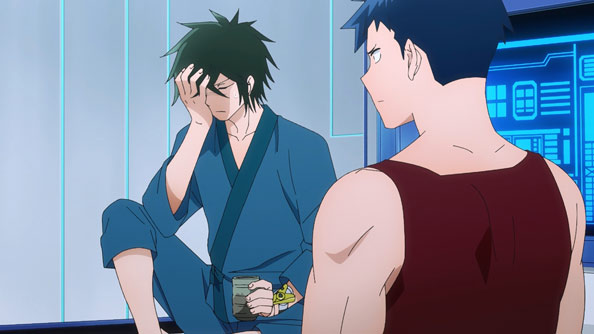 Green Gelato, AKA Todoroki Daigo, is regarded as the unflappable psychological rock of Gelato 5. But when he delivers a home-cooked meal to Fudou and sees he is writing an exchange diary for his girlfriend and hears her full name—Magahara Desumi—he suddenly goes into convulsions and collapses. When he comes to he tells Fudou why: Desumi was the monster he created. 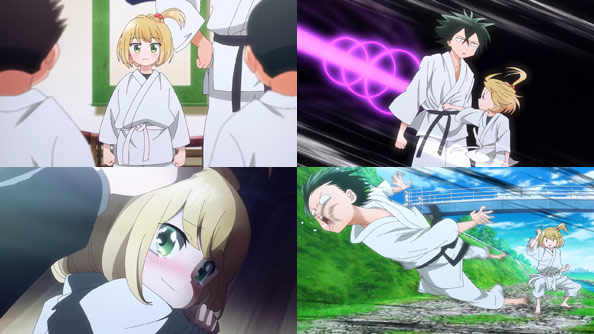 So begins a tale of regret and trauma, as Daigo recounts how he regarded himself as the top karate student in the prefecture (both of them were Hataka natives). Then a pint-sized, seven-year-old Desumi showed up one day, his sensei assigned him, a middle schooler, to look after her…and she nearly killed him with one punch.

Each time she nearly one-shotted him, he refused to do anything but save face and look cool, which of course only made Desumi more enthusiastic about training. Within days, she’d defeated Daigo’s master, who closed the dojo and became a hermit. But Daigo kept training her, even as it seemed likely to shorten his life considerably. No doubt he simply couldn’t turn his back on such a talented (yet cute and innocent) fighter. 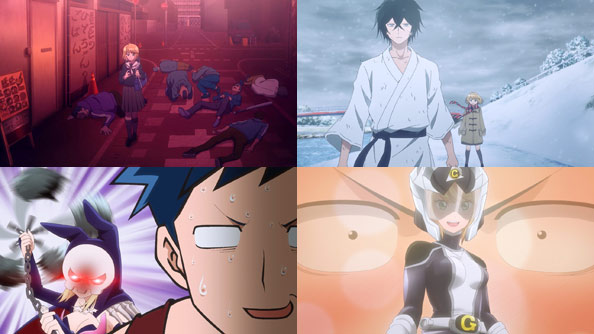 His face-saving delusions that she always bought aside, Desumi didn’t so much surpass Daigo as was always superior. She developed a reputation as “The Reaper of Oyafuko-dori” as a middle-schooler, eviscerating all challengers and developing the thick lonely, bored shell which Fudou would eventually help her break out of.

Daigo’s parents divorced and he had to move to Tokyo, he met her one last time on the riverbank, and despite going all out, was put on his back easily. Now that Young Desumi is back in his life, Daigo feels he must put his trauma aside and do his duty as Gelato 5’s recruiter by bringing Desumi into the fold. Of course, he’s still oblivious to the fact she’s already a Gekko executive.

Fudou can’t help but admit that having Desumi as Black Gelato would mean spending a lot more time together, so he arranges a meeting with her and Daigo. After some reminiscing, Daigo gets down to brass tacks and offers her a job with Gelato 5. Like Fudou, it’s an enticing offer, but she thinks about her family and comrades and respectfully declines.

She’s happy where she is and is worried if she was any happier she’d open herself up to karmic retribution. But seeing this older, gentler, somehow cuter Desumi flirt with Fudou like an ordinary girlfriend gives Daigo the completely wrong impression that she’s gone soft, and calls her out to a riverback to fight once again.

He sets the stake of their duel: if she wins, he’ll give up on recruiting her. If he wins, she’ll join Gelato 5 and end her relationship with Fudou, mentioning to her for the first time that Gelato forbids workplace relationships. While Desumi would have likely beaten Daigo (even in his Gelato suit, which his survival instinct activates without thinking), she gets super-fired up about winning when her relationship with Fudou is on the line.

Just as in the past when she’d very nearly killed him, Daigo plays it cool, saying he couldn’t go all out against his beloved pupil after so long, and grudgingly accepts defeat, with some final words of warning: whatever she ends up doing with her immense power, don’t go over to the dark side of Gekko. Whoops…

After parting ways with Daigo, Fudou and Desumi agree that they’ve gotten a bit too loose and comfortable being a public couple, and vow to take steps to being more careful. This includes Fudou pulling her off him should she take him by the arm in public, though that might prove both emotionally and physically impossible.

Regardless, they are still being watched and photographed in the shadows by someone I assumed at first to be Misaki, but might actually be a heretofore unseen character. Looks like Fudou and Desumi are in store for more drama and adversity…