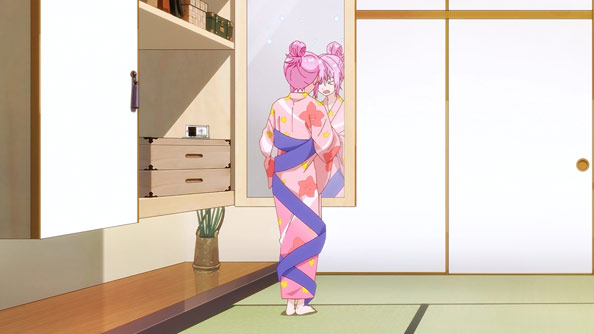 Izumi is still recovering from the sunburn he incurred at the river, but he’s still not missing the fireworks festival for the world. Shikimori says yes before he can even ask her to join him, and to his credit he doesn’t invite their other friends; this is a Capital-D date. Turns out Shikimori gets a little tangled up with her obi, but her brother helps her out. It’s a side of her we don’t often see.

Izumi comes fully prepared for a number of potential mishaps (including three separate wallets!) but nothing goes wrong as he gets to behold Shikimori in all her majestic pink glory. They take in the sights, and Izumi gets some cotton candy. It’s a bit too sweet for Shikimori, but she’s come around on sweet things since she and Izumi started dating.

When Izumi tries and fails to win a wolf plushie for Shikimori, she takes the rifle and vows to give it a try, engendering a chuckle from the attendant. She quickly avails him of his sexist belief by flashing the eyes of a huntress and shooting not only the wolf but everything else on the shelves. Her serious look is followed up by one of her biggest, sweetest smiles.

After spending a bit (but not too much) time with Neko, Inu, and Yui, misfortune strikes, but it’s Shikimori, not Izumi, on the receiving end: the strap of her sandal breaks. Izumi is able to fix it, but her feet end up covered in blisters. Izumi admits he wanted to take her somewhere special to view the fireworks, but it’s a bit of a walk and he doesn’t want her walking anymore. So he stoops down and tells her to hop on his back.

That’s right: Izumi may not look it but he’s pretty strong; certainly strong enough to carry his squeeze the required distance to the secluded spot. Shikimori is initially worried she’ll “snap him in two”, but she’s not as heavy as she thinks, nor is Izumi as weak as she thought. It’s a wonderful reversal for a show that so far has Shikimori providing most of the muscle. Izumi is unlucky, but not inept, and quite capable when it counts. 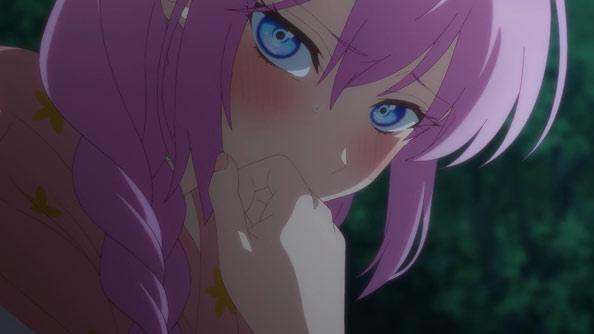 Sure enough, they’re all alone up at the top of the shrine grounds, and have a seat at a bench perfectly positioned for viewing the remainder of the fireworks. Shikimori has never seen them live, and Izumi admits that last year he was to scared to ask her to see them.

They were just friends at the time, and he was worried it would ruin what they had. Turns out Shikimori was waiting that whole night for him to call and invite her! But it doesn’t matter whether they didn’t go together last year. They’re there now, together, and they’ll be back next year.

As for the long walk back down those steps, Izumi doesn’t get far without slipping and falling with Shikimori on his back. Fortunately, his very stealthy dad swoops in Shikimori-style to save them both. Turns out Izumi’s folks came to the same spot to view the fireworks, and were sitting on a blanket just behind the lovebirds. Izumi’s dad was once strong enough to carry four people according to his mom, so he and Shikimori are no problem.

All in all, it’s another solid, sweet outing for our purple-and-pink-haired power duo. I feel an opportunity was missed for a kiss, or transition to a first-name-basis, but it was otherwise such a lovely time I really didn’t mind.