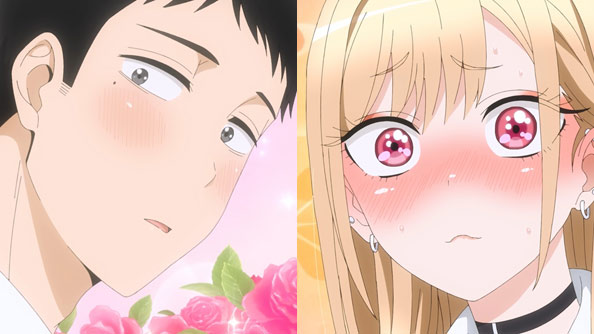 First Marin was called beautiful by someone who doesn’t use that word lightly. Then it dawned on her when she looked into Wakana’s eyes while they were washing her wig in his laundry room, one of the most adorably domestic things to do imaginable. That “it” is the realization that she’s developed feelings for Wakana. That’s how it goes sometimes!

That closeness she feels towards him only gets closer when she meets his gramps (who is clearly relieved the stockings weren’t his grandson’s) and is welcomed to their table for dinner. There, Wakana and his gramps learn that Marin’s idea of “eating well” is…a bit of a stretch! But watching Wakana interact with his gramps about her outfit and also being an ace cook only endears him to her more.

We also learn that both Wakana and Marin’s moms are dead, and since Marin’s dad is always away for work, she basically lives by herself. Gramps invites her to come by for dinner from now on, and Wakana doesn’t object. Just like that, the two are so much closer than they were even when he was taking her measurments. On the train ride home, Wakana’s words “we weren’t doing anything inappropriate” linger in her thoughts. “What if we did, though?” she rebuts.

I like how this episode didn’t just jump into the next cosplay project for Marin, but instead explored how quickly they’re becoming the most important people in each others’ lives. It’s also the opportunity to introduce Inui Sajuna, whom Wakana meets in the worst possible way. Wakana, likely unaccustomed to knocking in his own house, is also worried his gramps let a con artist into the house. Instead, he let a soaked Sajuna use their bath so she wouldn’t catch cold…and Wakana barges right in and sees everything. 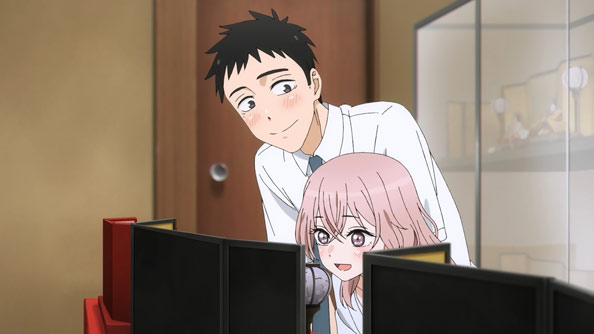 The two seem to get over that initial unpleasantness when Sajuna asks to see the “outfits” and Wakana, like gramps, assumes she means those of the dolls. Sajuna is charmed by the etheral beauty of said dolls, but suddenly changes gears and gets back on track for her true reason for visiting the shop: she wants Wakana to make her a cosplay outfit.

She starts by threatening to report him to the police for being a peeping tom, only to explain she found out where he lived by stalking him and Marin. So really, Wakana has the stronger case should the police get involved.

Fortunately they don’t, but Marin does when she shows up for her now regularly-scheduled din-din with the guy she’s decided she not only loves, but wuvs. Her shock at Wakana hosting a tiny girl wearing his shirt is soon dissipated when she realizes Sajuna is “Juju”, one of her favorite cosplay idols, who is actually a year older than both of them despite her size.

Sajuna wants Wakana to craft for her the outfit Black Lily, from her favorite magical girl anime. To Sajuna’s surprise, Marin is not only a big fan of Black Lily, but also knows everything there is to know about said anime. Marin further endears herself to Sajuna by assuring her she’d never cosplay as Black Lily, because she’s the kind of cosplayer, like Sajuna, who only chooses characters she resembles in both appearance and demeanor.

When Sajuna first saw the pics of Marine-as-Shizuku-tan, she assumed that Marin was just an “annoying bitch” who dressed up as characters she thought were cute. Now that she knows they share a deeper passion for the practice, Sajuna openly sobs in apology, though of course Marin has no idea what’s going on.

Marin also wants to be Black Lily’s sister and arch-nemesis Neon, and while Sajuna quickly shuts down the idea of cosplaying together in a heartbeat, I wouldn’t be surprised if they ultimately do collaborate not too far down the road.

Sajuna is also the indispensible “third character who can see what’s going on,” as she assures Marin she only wants Wakana’s contact info for the purposes of making her outfit. She assumes, this time not unfairly, that the two are dating. Upon hearing this, Wakana turns beet-red and loses it, telling Sajuna he’s never “gone steady” with anyone.

Hearing this is music to Marin’s ears, as she also assumed (for some reason) that Wakana was spoken for. She’s absolutely delighted that he isn’t. While things didn’t start smoothly (or G-rated) for Wakana and Sajuna, I’m looking forward to, well, all of this: Marin dealing with her powerful crush, Wakana hopefully coming to some kind of realization of his own vis-a-vis Marin, and Sajuna continuing to barely tolerate the pair’s blinding adorableness.