The longer Kitagawa is in her new Shizuku-tan cosplay, the more she notices how perfectly Gojou got all the details, and the more giddy she gets. She’s just overflowing with pure joy to the point she starts shouting “I can’t! I seriously can’t right now!” until Gojou helps her calm down. Dude did good! 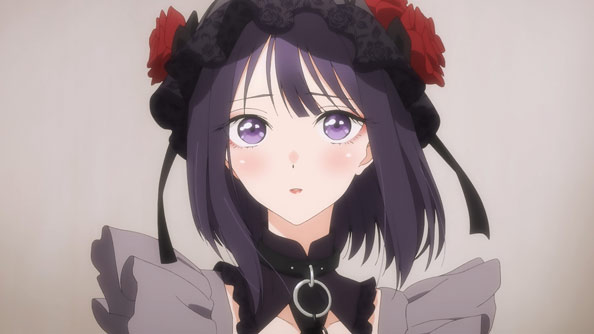 Invoking Kitagawa’s unbridled elation means its hard at first for her to pose as Shizuku-tan for the first series of photos, since her natural inclination is to flash her trademark gleaming smile and a peace sign. While she deems these photos “sorta hilarious”, once she gets Shizuku’s more serious look down, she gets a bunch of great shots she immediately posts under the hastily chosen cosplay alias Marine. 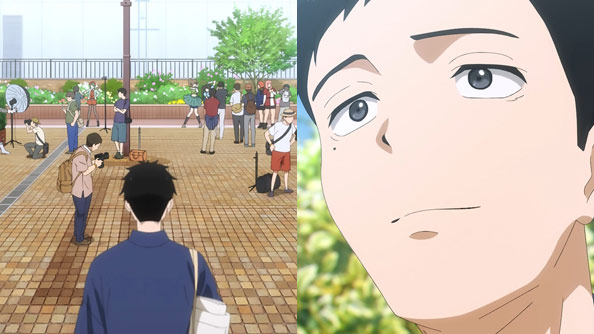 She’s so happy and excited, she decides she wants to attend tomorrow’s cosplay event after all. And why not? Gojou got the job done on schedule! At first he’s extremely self-conscious and even on the verge of panic when suddenly being among so many people dressed as their favorite characters. Kitagawa gets it, and once they go to a more chill section of the event, he begins to enjoy himself, surrounded as he is by people doing what they love.

He did such a good job on his first try, Kitagawa soon gets a huge line of photographers, many with much nicer cameras than her phone. Kitagawa is so incredibly psyched that people want to take her photo. Gojou hangs back, suddenly realizing that with his promise fulfilled, this will be the end of hanging out with Kitagawa…the big dork! But then Kitagawa suddenly looks panicked, looks around, then flashes a huge smile and starts running towards Gojou when she spots him.

Not only was she worried he’d disappeared on her, but she kinda messed up, deciding to wear two “NuBras” to enhance her bust even more, resulting in her boob bag being close to bursting. Add to that the summer heat and the thickness of the higher-quality fabric, and Kitagawa almost gets heatstroke. Gojou gets her into some air conditioning, and there Kitagawa demonstrates the trust she has in Gojou by having him unzip her back and even wipe the profuse sweat from her back. 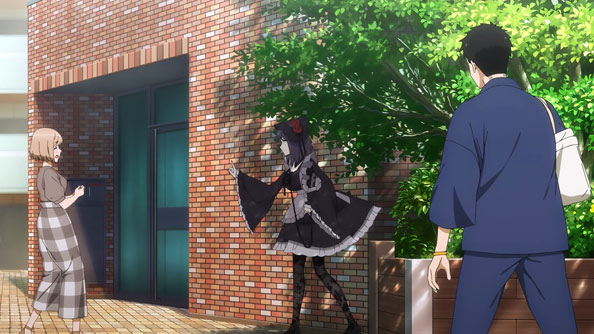 Gojou is understandably nervous about such close contact with Kitagawa, but notes that this is no time to panic; Kitagawa is so hot she can barely move, and is relying on him to help her. Once she’s feeling better, she shows just how nice a person she is when she returns to the plaza and tracks down the last woman in line so she can get some shots…including some unplanned upskirts that show the tally marks Kitagawa hand-drew on her inner thighs for extra Shizuku-tan authenticity (the lady deletes these shots).

Kitagawa and Gojou are blessed with a near-empty train car on their way home. Gojou, feeling bittersweet about their last day together coming to an end, formally thanks Kitagawa for everything. She thanks him back…then subverts his assumption by asking what they should do for her next cosplay. Obviously, this was never the end of anything; it’s only the beginning for these two. 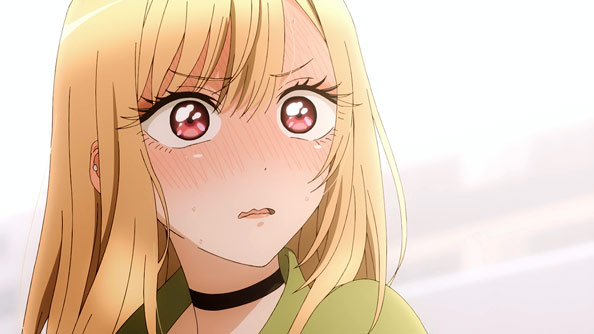 As the sun gets lower, Gojou betrays his fatigue by starting to nod off. I was expecting him to fall into Kitagawa’s lap, but instead, he drowsily tells her she was “very beautiful” at the event, thinking not about her posing as Shizuku-tan, but when she spotted him and ran to him beaming. Kitagawa remembers Gojou saying he never uses the words “pretty” or “beautiful” unless he “absolutely feels it from the heart”, realizes it’s no casual compliment, and cannot mask her bashfulness.

Fortunately for her, Gojou has nodded off and doesn’t see this face. But if he did, he’d surely turn just as red.  So ends another tremendously sweet and uplifting episode of one of the most joyful and beautiful animes of the season. Honestly—and I mean this in the same way Kitagawa does—I can’t…I seriously can’t with this show!