The weather is starting to turn in TakaKata Land, but the day Nishikata decides to change to his warmer winter uni, Takagi is still in her short-sleeved summer fuku. We see just how accustomed to losing challenges Nishikata is when she says that because he changed first, he wins a game she had goin on in her head—that doesn’t sit right with him!

He makes up a new game—one he’s sure to lose—in which Takagi loses if she says the word “cold”. He tries to get her to respond in a manner that would sound like the word cold, but as usual she’s too sharp for him. When he tries again, she turns the game to her advantage, drawing very close and asking if she says “cold” like he wants, will he…warm her up?

After the three girls are out of sync due to an undelivered text, Nishikata finds all his usual lunch buddies are out sick (or pretending to be sick), so he resigns himself to eating lunch alone on the steps, which he tries to make the best of but can’t help but feel lonely. Sure enough, Takagi sensed he might be lonely and joins him. 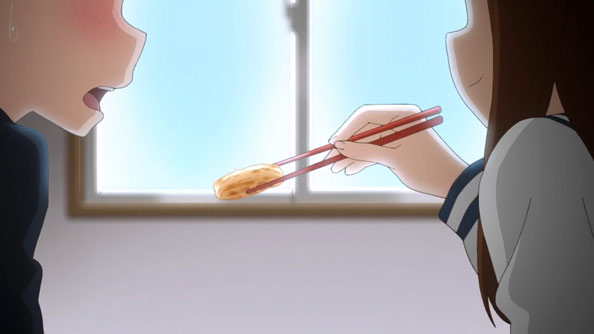 It occurs to me that these two rarely eat lunch together since they each have their own circles of lunch buddies. It’s so lovely to see them just sitting together silently munching away. Then Takagi has Nishikata guess what’s in her onigiri, claiming one of his prized karaage should he be wrong. She wins, but feels bad about taking his food, so gives him one of her crispy lotus roots, acting until the very last second like she was going to feed him, lovey-dovey style. 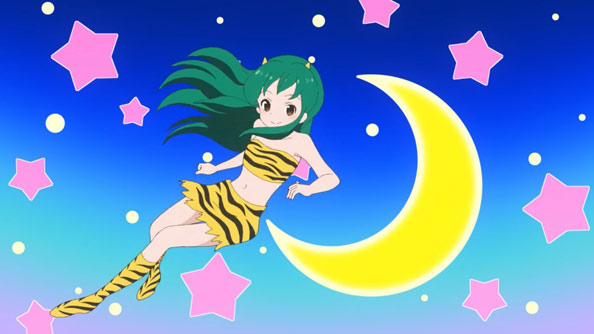 The next segment involves Nishikata trying to snap a photo of a thrown rock that looks like a UFO in the sky. Takagi helps by doing the throwing, and while she admits she doesn’t really believe, she likes that Nishikata does. It’s part of what makes her adore him. In a lovely whimsical twist, she spots a actual UFO, but he doesn’t see it.

One day the bath in the Nishikata household is inoperable, so he has to use the public baths. Takagi asks him what time he’s going and he tells her, then spends the entire time there either looking for her or wondering why she didn’t come. Then she surprises him by the milk vending machine, admitting she not only came, but came early, perfectly calculating how much longer she’d take compared to him.

Nishikata’s longing for Takagi’s company, even if they were separated by the different sections of the bathhouse, speaks to his growing affection for her and desire to be by her side more often than not. The feeling is obviously (to everyone but him, of course) mutual, as Takagi remarks how they don’t usually walk together at night, and how it obscures their faces. 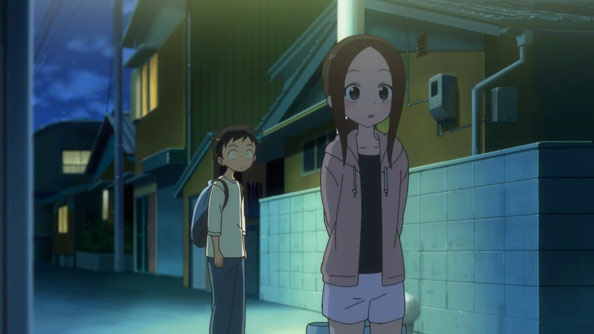 After Nishikata very foolishly challenges Takagi to a “whose face turns red first” contest— as soon as she leans into him he loses—the two continue their nighttime walk until it’s time to part ways to head to their respective homes. As she departs, Nishikata offers, unbidden, to walk her home, since it’s nighttime and thus not as safe for a young lady.

Takagi is so shocked by his offer, and loves so much how it sounds like something a boyfriend would say, she simply stands there in a perfect blend of befuddlement and delight. Then she thanks Nishikata for the offer and darts off, strategically hiding from him what must be a beet-red face.