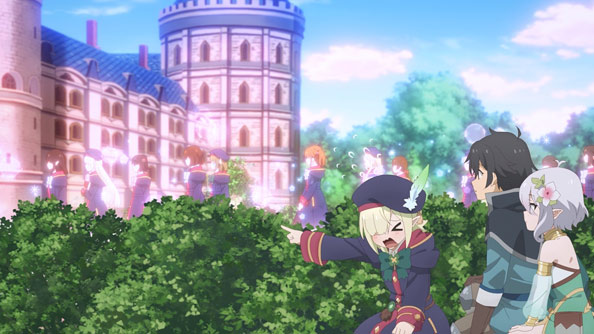 While Peco and Karyl clean the house, Yuuki and Kokkoro do the shopping, and encounter an old friend in the eccentric forest elf Aoi (Hanazawa Kana), first introduced back in the sixth episode. She wrangles her fellow “Team B-B”-mates into lending her some emotional support as she answers the summons of a fellow student at the fancy St. Theresa’s Academy for Girls. 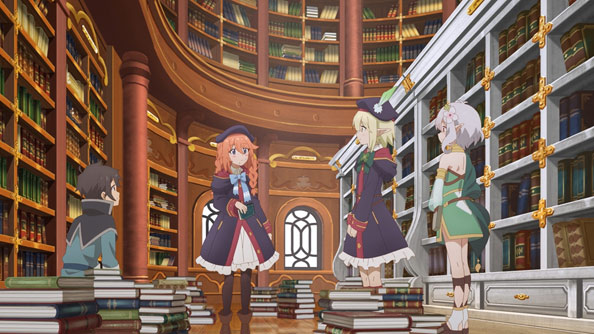 The three enter the awesome Beauty and the Beast-esque library, and Yuuki happens upon a pile of books on the floor, under which lies Yuni, a student and scholar who has a very poor memory, but uses a memo book to keep track of her thesis on “The Fundamental Falsehoods that Lurk in Our World.”

Yuni and her fellow “Best Friends Club” members Chieru and Chloe don’t come from money, so the three allied together to win it by achieving a great feat for the sake of the school. There’s a rumored threat in the woods near the academy of “Green Guardians”, so Yuni calls on Aoi and her knowledge of said woods to aid them in getting to the bottom of things. Aoi, in turn, invites the Gourmet Guild to accompany them.

Once in the woods, the party of eight soon learns that they’re walking in circles and soon become lost; not even Yuni’s semi-sentient pet rock can guide them. Then Aoi gets separated, the team splits up, and one by one vanish into the eerie, thick fog, until only poor Karyl is left to run through the woods in a panic. For a show that leans into goofy comedy, it gets the creepy atmosphere and Karyl’s fear of being alone just right.

It’s an incredible development, then, when we learn that the members of the party were being picked off one by one by none other than Aoi, who had constructed the “Green Guardians” out of wood to be her friends away from the academy. When Peco, Yuuki, and Yuni catch her red-handed, the gig is up. But…as hilarious as this is, it doesn’t solve the underlying mystery.

Graveyards mentioning kings and kingdoms that never existed are then joined by a whole mess of undead skeletons as the forest turns into flaming ruins. There’s also a weird pixelated glitching going on. Something completely unrelated to Aoi’s larger-than-life wooden friends is going on, and it gets right to the heart of Yuni’s hypothesis about a “great deception” in the world.

Everyone is then transported into the memories of the head crowed skeleton, who it appears was once a jolly king beloved by his subjects and in particular one joyful little girl…only for it to all go literally to hell. Something happened to the king, be it some curse or dark corruption, and it sure looks like he presided over the destruction of everything and everyone in his kingdom. 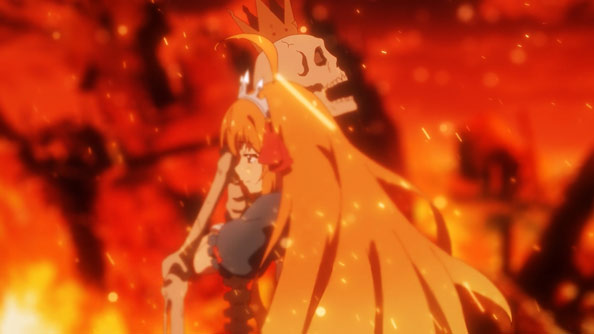 While everyone else is (not wrongly!) wigging out over the scary skeletons with glowing red eyes surrounded by flames, it takes a fellow royal in Peco to notice that they mean them no harm. Like the adventurers in the first episode, the king and the other skeletons simply want to pass on. With a big empathetic hug, Peco does just that.

Many mysteries remain from this very intense quest: why is there no record of the king, his kingdom, or its downfall in any of the books of their world? Yuni apparently already came oh-so-close to unlocking the great overarching secret of her world, only for her memory to fail her and for the academic society to decry her research as pure fiction.

It’s heavily implied, especially from the pixelated glitches, that this world is one of many, just like the one Yuuki came from. But as Yuni joins the others at a tea party at Aoi’s charming home in the woods, she isn’t frustrated or defeated. For her, finding “the truth” has always been secondary to simply learning and absorbing knowledge around her. It’s the intellectual journey, not the destination, that matters most.

I really liked Yuni, and Kohara Konomi does a great deadpan reminiscent of Minore Inase’s Sleepy Princess. She fills the role of “brainy scholar” quite well amongst the band of well-meaning weirdoes and airheads, questioning this world rather than taking it at face value, but ultimately not stressing that much over it.