Last week aptly documented Lugh’s happy and successful life as Illig Balor with his right-hand women Tarte and Maha. Now two years have passed. While before Maha was powerless to save her friends from criminals, here she keeps an eye out for them when they’re out late and dispatches their would-be muggers with ease.

Lugh has learned that given a chance (and adequate resources), Maha has not only become someone who can protect herself and her friends, but thrive as a merchant. We learn that the shop purchased as the HQ of his now booming cosmetic brand was the first shop Maha’s father opened when he was a merchant. Both Maha and her friends are eternally grateful for Illig’s help giving them their new happy and successful lives. 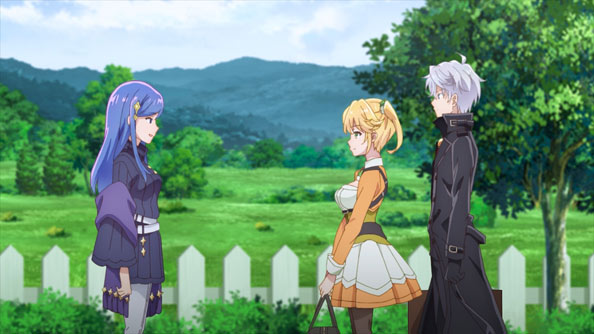 But for Illig, this life is now over and it’s time to return home and to being Lugh Tuatha Dé. He leaves his thriving business in Maha’s capable hands, while Maha asks that if her Prince can spare a day a month for Dia, surely he can come see her sometime as well. Maha and Tarte also leave on warm, happy, and mutually respecting terms. They don’t see themselves as rivals for Lugh’s heart, because in their view there’s plenty of that heart to go around.

On the wagon ride home they run into some wolf monsters, which Tarteuses the skills Lugh taught her to easily defeat without Lugh having to lift a finger. Once they reach Tuatha Dé lands and he sees the new soybean fields, he gets out of the wagon to receive a warm welcome—and a big basket of produce—from his adoring people.

Unlike Maha and Tarte, they may not know there’s a lot of calculation in his behavior, but even if they did, like Maha and Tarte it’s his actions, not the motivations behind them, that would likely matter most to them.

Has the assassin from our world who is now Tuatha Dé become more sentimental now that he’s been in this world for fourteen years? It’s hard to say, but if he has, it hasn’t softened his edge one bit. When his father reveals that one of the most important reasons for sending him to be a Balor was to give his son the choice he no longer has: to walk away from the thankless life of an assassin anyone in the kingdom could betray and abandon at any time.

Lugh’s answer is a firm no, for the simple reason that he isn’t a Balor, or a merchant: he’s an assassin and a Tuatha Dé. Honor and duty to the kingdom mean nothing to him, but the happiness of the people he cares about means everything. Also, he mentions that he’s in love with Dia, and can’t marry her if he abandons his noble station to be a merchant. It’s another calculated move, but one that doesn’t preclude that he is in love with Dia, and simply calling it something more pragmatic.