Kukuru has hit a wall again. There’s too much work to do, and not enough time to do it with the organizational skills she currently possesses. Her boss Suwa remains as unfeeling as a Vulcan. He doesn’t say it, but it’s implied every time he barks his catchphrase “That’s all from me”—which he didn’t actually say this week! What he’s really saying is “If you can’t cut it, I’ll find someone who can.”

Kukuru’s a free spirit, and being wound up so tight in that fish-less office is wearing on her. She seeks any relief, whether it’s pressing her face against the main tank (her sole interaction with Kai. Sorry Kai!) or going out to a lagoon to observe a lost baby dolphin, whom she names Ban-chan. She doesn’t just love how cute Ban-chan is, she also envies his freedom.

This is one of many excellent images that show rather than tell how things are going for Kukuru this week…she’s behind literal bars! She wakes up from a dream that she’s drowning! On top of all the other projects that keep her in the office well past office hours, Suwa orders her to prepare a presentation for a wedding planner for ceremonies at Tingarla. Kukuru gets to it … but is never into it.

Back home, her Gramps and Tingarla’s boss Hoshino discuss things at Udon-chan’s mom’s restaurant, which Udon-chan’s mom has to run instead of drinking because Udon-chan ain’t there. Hoshino says Kukuru is doing her best in marketing…no “but”! Gramps knows Kukuru and so knows how hard it must be, but still believes being “outside the tank” she grew up in will ultimately prove to be a “good experience.”

Perhaps it’s because Kukuru has no mom or dad to guide her during this crucial time when she’s just started adulting that he believes tough love is the solution. Kukuru gives it the old college try with the wedding presentation, but the show wasn’t fooling anyone. I knew she was going to bomb, and that Suwa wasn’t going to console her. That said, he seems neither mad nor disappointed in Kukuru’s first big presentation. I just wish we could have gotten something from the guy…maybe hear about his first presentation.

The wedding project isn’t ruined, it just needs a fairly substantial redo. But the cost of the presentation (whether it went well or not) is much steeper for Kukuru. She misses out on Fuuka going diving with Ban-chan, and she returns to Tingarla too late to see Airi, the girl in the hospital who came to visit. Karin tells her not to feel bad; she had work. But now work is taking up so much time and energy it’s denying Kukuru a lot of the things give her joy and happiness.

While working overtime again, Kukuru snaps—but softly; more like a stalk of kelp than a hard branch. As her eyes blur, she asks herself Why was I trying so hard again? So she could get more work and see less of the things and people she loves? That can’t be right!

Then she remembers her Gramps telling her Gama Gama was going to be demolished soon, so if she wanted to see it one last time, she’d better hurry. But work kept her from saying goodbye to Gama Gama while it was still whole. When she arrives by taxi late at night, it’s just a pile of rubble. 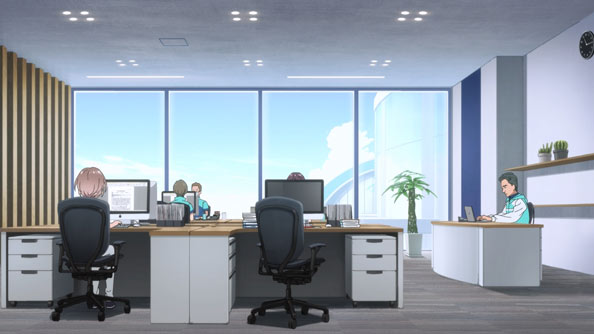 Kukuru’s already tattered spirit shattered into a thousand pieces at the sight of that rubble. There’s no melodramatic tears; I was reminded of Titus Andronicus when he said “I have no more tears to shed.” She just looks…defeated. Spent. The next day, Kukuru skips work, but work goes on without her.

There’s a parallel between Kukuru’s arc and Ban-chan’s. Both have been set loose—the dolphin got separated from his family, Kukuru got thrown out of the tank to either succeed or fail. Even though I know the show is not going push Kukuru to suicide, she is definitely not having a “good experience”.  Her absence from the office is frankly chilling, and I just hope she’s somewhere safe and close to loved ones.