We learn two things when Futaba gives her scarf to a nursery school kid who lost her own: one, Futaba is bigger than some people, and Futaba has a kind heart. Takeda just happens to witness this good deed, and Futaba shivering afterwards, so he makes the obvious move: giving Futaba his scarf. Futaba is embarrassed, but also happy. 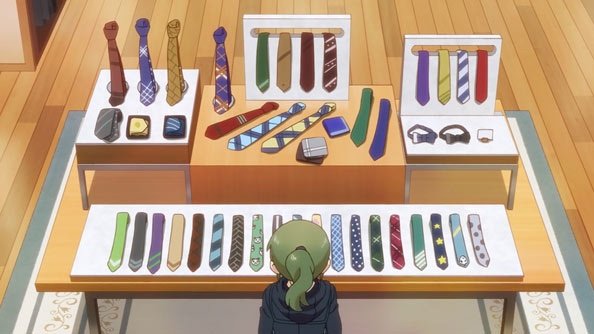 It’s cold because Christmas is almost here. Futaba and Sakurai end up the Office Santas this year, but after mulling it over in her mind and talking to Harumi about it, she only wants to be Santa for one person: her senpai, as thanks for all he’s done for her since she started. A necktie is the appropriate gift, but Futaba is quickly overwhelmed by the variety.

Thanks to a sales rep’s assistance, Futaba finds the right tie, though I think she should have gone with the flowers or pandas…the better to mark her man with something cute! The problem is, between her and Sakurai’s Santa duties and the extremely busy day at the office on Christmas itself, Futaba just can’t fund the right time to give Takeda the gift. Granted, her standards for “the right time” might be a bit too high! 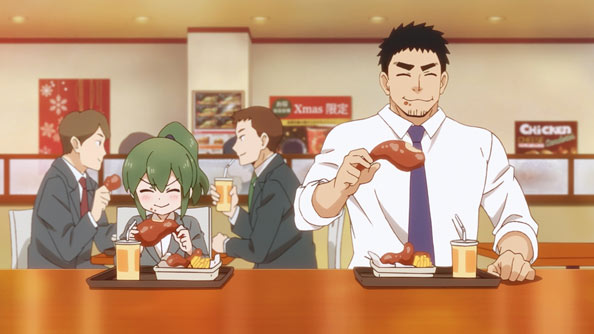 After wrapping up a meeting at another office for a meeting, Futaba believes she’s found the perfect time, only for her stomach to growl, which to Takeda indicates they should go to dinner. She suggests Christmas chicken, even though it’s not Christmas—a decision neither she nor Takeda regret and had me salivating for some chicken myself. 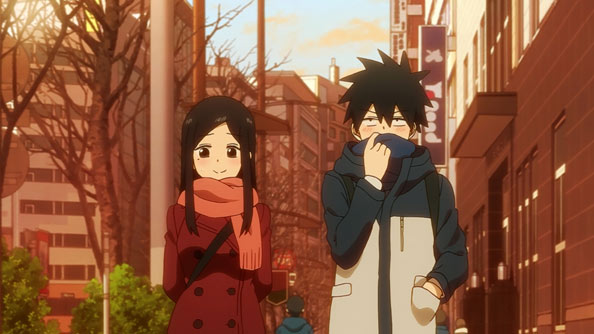 Back at the office, Kazama is waiting outside for Sakurai, who sees him looking at photos not of herself, not Futaba, in her Santa outfit. She teases Kazama a little, to the point he pulls his scarf up and gently asks if she wouldn’t tease him quite so much. After walking her close to her home, he finally works up the courage to ask her to a belated Christmas dinner. Sakurai is overjoyed and immediately accepts.

Between this immensely cute “normal” couple and the slighly more unique dynamic of the tiny kouhai and her immense senpai, we’ve got two wonderful romances in the making, and I can’t take my eyes off either. When Futaba finally gives Takeda his gift, he takes the opportunity to give her his gift to her: a big fluffy scarf to replace the one she gave the little girl.

While Futaba is exasperated the next day when it’s clear Takeda thinks the tie she gave him is “too nice to wear”, instead proposing he put it “on display”, there’s no denying that receiving a new scarf from him the previous night totally made her end of year.

After a brief scene showing a seasick Rudy and Eris (and a very unseasick Ruijerd) headed to the Central Continent by ship, the rest of the episode belongs to Roxy, who is always either a step ahead or behind her apprentice. We learn she was once in a party with Bojack…er, Nokopara, who has cleaned up his ways since getting burned by Rudy two years ago.

Nokopara, who is a bit older than Roxy, tells her to go visit her damn family already, citing his own family he built since they last met as evidence that family is the most important thing. He would do anything for his wife and three kids, and suspects Roxy’s parents would do the same for her. I must say I appreciate the softening of the initially assholeish horseman. 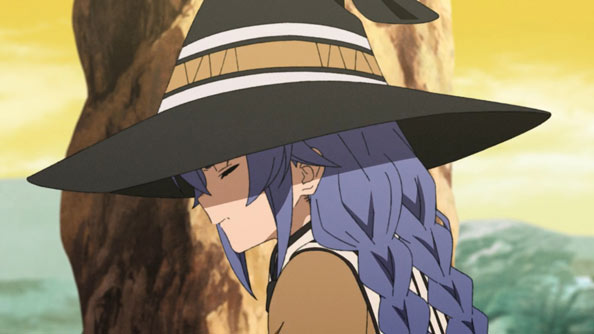 When Roxy arrives at her home village, she’s immediately given a painful reminder of the main reason she left: in this village, she is “deaf”, i.e. unable to hear the telepathic communication of the other villagers. When they try to greet her, she’s just hit with a static-y feedback accompanied by pops of light—which to the show’s credit is almost as unpleasant for us as it is for Roxy.

Even when she makes a connection with three kids by healing one of them, when they try to thank her telepathically and she doesn’t respond, then a parent shows up and tries to do the same, everything goes pear-shaped. This is a place where Roxy has always felt oppressed by her difference, and the reluctance of anyone there to accommodate it.

It’s a bad start to her return, made worse by a stilted reunion with her parents. Clearly still off from her previous interactions before arriving at her old home, Roxy is noncommittal about how long she’ll stay. When her parents tell her she can stay as long as she likes, then immediately settle into their usual telepathic banter, they unintentionally exclude her out of force of habit.

At this point Roxy has had about enough, and as much as I want her to reconnect with her folks, whom we know to be so loving and kind and caring of her from when Rudy visited, I can’t blame her for wanting to go. She feels like an interloper, an outsider, and always has.

But then her mother starts to cry, after Roxy agrees to visit once in the next fifty years. Even that extremely loose promise is enough to bring tears to her mother’s eyes. Then Roxy catches in the corner of her eye the doll her mother made for her, which she’d clutch while she taught her to read and write, all the while speaking verbally.

One day, lil’ Roxy encountered some kids who she would have been able to befriend, if only she could hear what they were saying telepathically. When they don’t answer her, she understandably feels like she did something wrong, that she was somehow wrong herself, and didn’t belong. That’s why she ran away: so she wouldn’t cause problems for her parents.

But remembering what Nokopara said about parents (good ones anyway) doing anything for their children, and seeing her mother weeping and her doll on the shelf, Roxy can’t help but start crying herself. Oh, she tries to stave off the tears, but that just makes them fall in a great sobbing torrent all at once, in a wonderfully beautiful moment where the camera simply rests on her contorting face.

Roxy gathers her mother into a hug, they both apologize, her dad, getting misty-eyed himself, joins that hug. You have to hand it to Mushoku Tensei, because two straight episodes with these kinds of tearful, cathartic embraces might’ve come off as repetitive and even emotionally manipulative. Instead, I felt right there in that hug, where Roxy suddenly realized this place is still her home, because the people she loves and who love her, are there.

She also learns that Rudy had visited with Eris and a Superd, which enables her to finally connect the dots: Rudy’s the one who revived the Dead End name, and if a Superd is in his party, he must be doing just fine. Roxy rejoins her own party and continues the search for the missing, buoyued by the strides she made with her family and relieved that her apprentice is fine, wherever he is.

With the Dark Lord restored and her nemesis now her pawn, Jahy wants a reward for all this progress in the form of her dear friend Kokoro’s company and praise. Unfortunately, Kyouko is still following Jahy around like a lost puppy. When Jahy takes Kokoro and runs, Kyouko assumes it’s a game of tag and chases after them with her Magical Girl Speed.

When hopes of Kyouyko being carted off by the cops are dashed, Jahy finds herself in the awkward position of having to admit that Kyouko (whose name she just learns now) is a friend. Not only that, she has to come to terms with the fact that Dear Kokoro belongs to no one, and she is biologically incapable of not becoming friends with someone.

Thus, Jahy must adjust to the fact her playdates will consist of both Kokoro and Kyouko. Yet when she heads to work looking forward to being away from her, she learns Kyouko has responded to a flyer for a part-time job, and the manager hires her on the spot. Now Kyouko is her friend and co-worker.

At first, Jahy is happy for the prospect of extra help—she’s asked for it in the past—but as expected, Kyouko is as big an accident-prone klutz serving customers as she is defeating evil as a magical girl. Jahy only salvages the situation by wowing the customers with feats of balance and dexterity…catching everything Kyouko drops.

Kyouko is discouraged when Jahy orders her to stop doing…everything and just stand back and observe, but the manager assures her it will be okay. Jahy, after all, was horrible when she first started, but as the manager has come to learn, Jahy will give something she cares about her all.

Thanks to Jahy’s diligent training, Kyouko ends up learning the ropes fast and finding her footing. It also has to help that Jahy found a tiny mana crystal in Kyouko’s hair, which must have been causing at least some of her serving mishaps.

Jahy exhibits her typical snobbishness in foisting something the manager wants help with on Kyouko, only to parkour herself over to the dining area with fork and knife in hand when she learns that something is a taste test for new menu items, starting with stewed flounder.

While Kyouko offers gourmet criticism that wouldn’t be out of place in Food Wars (and must indeed be a nod to that franchise), Jahy is more cryptic, both because she’s not so well-versed in food critic-speak, but also because she wants to use this opportunity to eat tasty food for free…which is truly the feral demoness we know and love.

As a result, Jahy is able to sample ginger pork and then cubed Wagyu steak. Eating meat revitalizes her like nothing else, as she’d become so used to bean sprouts due to her low budget. But the steak gives her a full-on Food Wars-style foodgasm, metaphorically stripping her clothes off and sending her straight to steak nirvana.

Unfortunately someone who does have better judgment (at least when she’s not knocking back booze) arrives in the form of the landlady, who stops this charade by very clearly identifying what’s going on here (Jahy just wants food) and vetoing the choice of steak on the menu (since they’d never make a profit).

Then the Demon Lord shows up out of nowhere, drawn to the pub by some combination of her meal ticket Kyouko, Jahy’s mana crystals, and the smell of delicious food. She polishes off all the food and wants more, but Kyouko cuts her off before she can cause lasting damager to the manager’s business.

The lord is upset, but Kyouko mitigates that by promising she can have her choice of anything at the konbini on their way home. Jahy has to watch in outrage as her Demon Lord walks away hand-in-hand with Kyouko. If Jahy could out-feed her superior, she could defeat Kyouko in this fresh predicament. Alas, bean sprouts aren’t going to get it done…