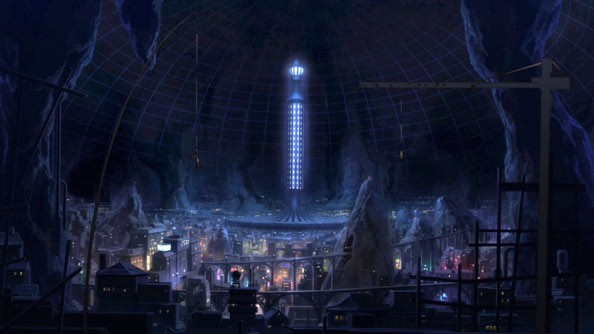 The all-caps up top are no mistake—this is a big, loud first episode, starting with a father-daughter quarrel through an impossibly complex subterranean metropolis that’s shot like a Mission Impossible film. The precocious Memenpu wants to become a “Marker”, one of the elite group who trek through the Labyrinth to parts unknown. Her father Gagumber is content to keep her home and safe as they work menial jobs in the colony.

Their home, Pinyin, is basically one big nest where Memenpu’s father never wants her to leave…at least not yet. But Memenpu, despite being only nine years old, is already a college grad and distinguished inventor. It’s only a matter of time before Pinyin—and her dad—just can’t hold her back from grander, more dangerous future.

Memenpu finds inspiration in Lynda, a Marker who works side-by-side with her dad Walsh. Lynda is initially fine stoking that fire of adventure and discovery in Memenpu’s diminutive abdomen, acting as a big sis and role model and encouraging her little sis to dream big. As it so happens, Memenpu has dreams about and draws pictures of a surface with a boundless sky. A mysterious master Marker named Urorop seemingly eggs her on by leaving a photo at her door of that very surface.

While Memenpu and Lynda bond, Gagumber and Walsh drink. It’s pretty clear that Gagumber used to be a Marker like Walsh, and probably a good one,  but gave it all up (including all the esteem and preferential treatment) the moment his daughter entered his world, and then became it. But Walsh, as someone with an older daughter who has already been through this, tells his friend that there comes a time when a father has to put trust in their child to become their own person.

While I have no doubt that Gagumber is immensely proud of his little girl, that’s tempered by a great sadness that she grew up so damn fast. When he teeters home drunk as a skunk and she pretends to be asleep, he’s still lucid enough to make his thoughts clear. It’s not that he never wants her to grow up, only that he wishes she’d stayed a kid a little longer.

But it’s not just Memenpu’s natural intelligence and talent that is pushing her towards adulthood and independence, but seemingly Urorop as well. Along wih the photo of the surface, Memenpu is given a jewel that when its intricate cracks are projected on a larger surface reveals a map of the Labyrinth around Pinyin…and a route to the surface in the picture.

Then a kaiju bursts through the walls of the colony and wreaks havoc, sending Memenpo, Gagumber, and Lynda on a mad dash to safety. When they’re cornered, Gagumber draws his pistl and shoots the monster in the face, asserting that he won’t let it hurt his beloved daughter. Memenpo is shocked by her usually deadbeat-ish dad’s sudden change in demeanor.

Speaking of changes in demeanor…at first the kaiju chase is played as tongue-in-cheek; the kind of whimsical lunacy you’d find in Durarara!! or Gatchaman. But the kaiju threat is real, and even Lynda curtly orders Memenpo to keep back as she and her dad Walsh board their Mark Bot to do battle. Just as Walsh is complimenting Lynda on having grown up, the two of them instantly get blown up. Memenpo is frozen in shock…as was I. I did not expect shit to get so real so quick. 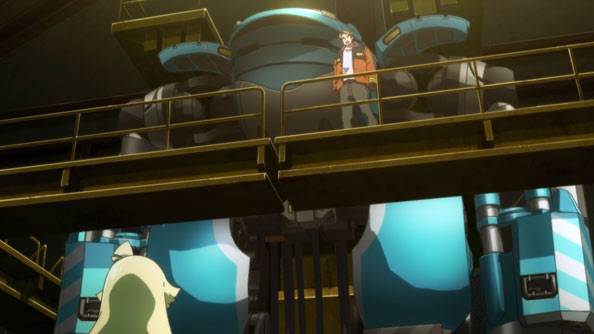 Fortunately, her dad’s composure isn’t so easily shaken, as he scoops her up and takes her to safety. But if this day’s events taught him anything, it’s that Walsh (RIP) was right: when “someday” becomes RIGHT FUCKING NOW, all a father can do—all a father must do—is trust in their child. But, again, she’s only nine.

So he compromises: she’ll let her strike out into the vast underground unknown towards her destiny—heck, he’ll even supply their transport in the form of his old Mark Bot—but he’s coming along for the ride to protect his little girl. So begins a father-daughter adventure for the ages. I can’t freakin’ wait to see where it goes.