NIGHT HEAD 2041 is all about making connections between people on very different ends of the struggle for freedom of thought and creativity, which is really the struggle for humanity itself. One of those is that the mother of Masayuki—the boy who can take over minds who went full John Wick last week—was high school friends with Futami Shouko, the time traveling girl the Kuroki brothers saw at the Miracle Mick raid. I’m not sure why this connection exists—or why Shouko ties her hair…with her hair—but it’s still intriguing.

Meanwhile, the Kirihara brothers were rescued by the Free Speech Alliance, who are pretty much the opposite of the SWE, fighting for the very things the SWE are trying to stamp out on orders of a government that does not care about the hypocrisy of employing psychics. Members of the FSA admit that nobody really has very clear memories of the disasters propaganda touts as the reason for this thought crackdown.

In case you thought the governemnt had some good points, we along with the Kiriharas are shown how those who commit thought crime—including young children—are put on display like zoo animals and re-educated. These are bad, but faceless people. We only know who work for them: SWE and the Kuroki brothers.

When Masayuki goes berserk, escapes from custody and goes on a bloody killing spree through the halls of SWE HQ, all because he fears the cops hurt his mom, I’m kinda on Team Nobody. Both Masayuki’s mom and Naoya are a bit too naïve to think the kid can come back to anything resembling a normal life after all the people he killed.

At the same time, only SWE scrubs get killed, and I can’t feel too much sympathy for them, since we know “I was just following orders” is no defense for committing atrocities. That the SWE officers with names who we do know shoot their mind-controlled colleagues without hesitation shows how much this system has fucked with their humanity. 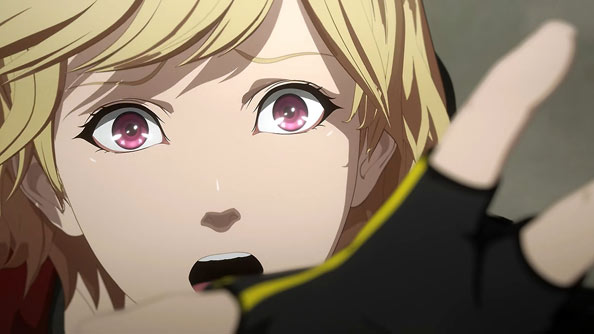 Hell, that the system pushed a little kid to the brink it did means this simply isn’t a system that can last long before it crumbles. But despite working for what can be charitably described as an Enemy of Humanity in the SWE, Yuuya still leaps out and saves Masayuki from Takuya’s psychokinesis , while Reika’s own power awakens just in time to save Yuuya from a giant deadly falling corporate sculpture.

This is a great symbol for the system: overly burdened with zero tolerance laws and brutal punishment; hanging by a thin, fraying cable. The Free Speech Alliance doesn’t actually do anything yet, and it’s not exactly clear what they will do. But between them and the rampant “law-breaking” going on even in normal high school club rooms, that cable is going to snap someday.

With Zetsuya left utterly destroyed by Tomoe and Mio’s OP one-upmanship, they, along with Makoto, Toa, Rinon, and a “fellowship” of other adventurers (an elf, a dwarf, and a dude) pile into a wagon and head for the next human town, the less feral Tsige.

While stopping at an guild outpost Makoto manages to convince Tomoe of the merit of becoming a “knight-errant”, or ronin, and she heads off on her own, never to be seen again!

Tomoe would be a huge loss if the other characters both old and new couldn’t hold their own, but they totally can. Toa’s penchant for graphically dissecting defeated monsters while looking exactly like Hasegawa haunts Makoto, while a Mio without a Tomoe to snipe at is still jockeying for her master’s attention…though she deems Rinon “a charming little girl” for assuming Mio and Makoto are dating.

Makoto and his new friends are reluctant to part once arriving at Tsige, so they have a big celebratory feast at a blue-collar tavern of Toa’s choosing. Perhaps due to him being served one too many orders of  Brazen Youngster-Style Primeval Meat, Mio’s dreams of a steamy night alone with Master are dashed when he hits the hay and falls right to sleep. There’s also the fact that he’s just a kid, and has eyes only for Hasegawa or her isekai equivalent.

Thanks to the use of Mist Gates, Makoto and Mio return to the Demiplane where a far more confident and forthright Emma is waiting for them, along with Mini-Tomoe, who also has no idea where her counterpart is. I like how Makoto obviously isn’t worried about Tomoe (except perhaps whether she’ll destroy any other towns), but he does seem to miss her towards the end.

So did I towards the end, but like Makoto I was sufficiently distracted by the lively goings-on quickly of his expanding Demiplane empire, including that one grizzled dwarf who is absolutely hell-bent on creating a garment or accessory that will kill Makoto instantly. He’s got a long way to go! 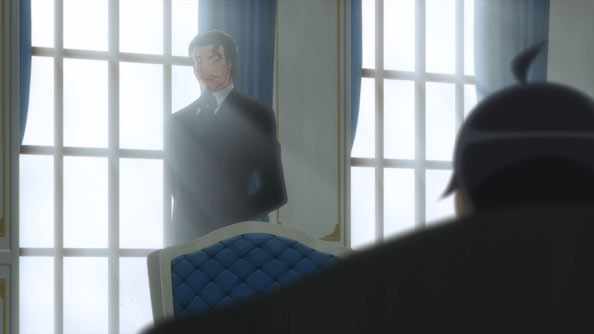 On the way to Tsige Makoto uses his trusty bow to swiftly deal with some pretty rare monsters, who drop valuable ruby eyes that the Rembrandt Trading Company is looking for. The only problem is, Makoto has heard some ill rumors about misfortune befalling anyone who deals with Rembrandt.

Thankfully, this does not dissuade Makoto from doing a deal with them anyway, though as soon as he arrives he is summarily rebuffed. Perhaps he needs a bit of Tomoe’s memory-altering powers…or maybe he’s going to try to negotiate his way to a profit without the many OP tricks at his disposal. Either way, Makoto & Co.’s journey has never not been extremely fun, zippy, and more often than not, hilarious.

P.S., the show has now cycled through three distinct EDs. This one went back to showing Makoto and his sisters growing up, which is very sweet and uplifting. My favorite, however, continues to be Tomoe and Mio’s shred-tastic power metal cover of the first episode’s Enka-style ending, as seen below: