Koguma says “I’m off” to no one as she leaves her spartan apartment (put up some Super Cub posters!) in the early morning to meet up with Reiko and Shii at Buerre. Back when Shii begged her to use her Cub, which had rescued her from the ravine, to take Winter and send it away, Koguma said her Cub couldn’t do that. But one thing it can do is take them to where Spring has sprung so they can seize it and bring it back home.

After Shii’s doting parents see them off with their blessing and some military-grade komisbrot, Shii rides double with Reiko and the girls set off on their grandest tour yet, headed all the way down to Kagoshima, on the southwestern tip of Kyushu. There lie the first cherry blossoms. After just their first hour on the road, known as “the devil’s 60 minutes” Koguma and Reiko stop to check their steeds from stem to stern.

They take the famous historic routes used in the Edo period, which happen to include many cute cafes where Shii can gather some pointers. They also enjoy a quick lunch of the hearty rye bread with cream cheese and local smoked salmon—very Scandinavian! 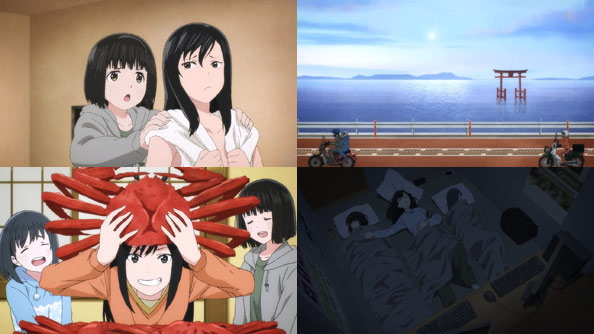 They spend their first night at an economical business hotel near Lake Biwa, where Reiko again demonstrates her complete lack of modesty, claiming curry should be eaten while naked; Koguma is having none of it. They pass the stirring Shirahige torii gate, pass the Tottori dunes, shell out for some seriously huge crabs, reach the far end of Honshu, then spend the night at a net cafe in Kyushu.

As they ride through all of these famous places and take in the sights and tastes, there’s a very straightforwardness to it all; it’s essentially one long breathless montage with only a few brief stops to eat or sleep. Through it all, the three girls grow even closer and more comfortable with each other.

When they finally reach their destination of Kagoshima, the rewarding feeling of having made it all that way there on two Cubs (no cheating with trains!) is matched by the ephemeral gorgeousity of the bloossoms. They set out to find out if they could achieve this, and they did it: they seized spring and basked in its beauty.

By the time they return home, Spring arrived there as well, as if they had brought it with them. And in the midst of Spring, Shii reveals she decided to buy a Cub of her own, an elegant “Little Cub” in her preferred powder blue. When she can’t help but pet it like a new puppy, Koguma and Reiko break into laughter, having both been there and done that!

The series closes on a triumphant shot I had been hoping for since Shii first entered the lives of the rich politician’s daughter and reserved loner: the three girls on their three Cubs riding together in single file. Koguma’s final voiceover says if you sit back and do nothing, a Cub can’t and won’t help you, but if you hop on and decide to take a corner you’ve never turned at before, that Cub will be right there with you for whatever may come.

I’ll admit it: I’m a lot more enticed to buy a motorbike than I was before watching this show! I also have a similar affinity for my trusty Civic. What I thought was a gussied-up advertisement turned out to be one of the most earnest, heartfelt, unique, and beautiful stories of friendship, love, adventure and accomplishment to come along in a long time. I’ll miss my Cub girls!