We arrive at October 30th, the day the five remaining members of Spearhead get into a scrap with the Legion and lose Fido as well as all but Shin’s Juggernaut. Things are getting desperate and they’re running low on ammo, fuel, and food, which means soon their recon mission will be at an end. All of them know what that means, but rather than dwell on that, they simply keep living their lives until the time fate decides to take them.

This means taking shifts piloting the ‘naut while the others rest or watch the rear from the remaining cargo bot. Thanks to Shin’s instincts and a rainstorm they manage to evade another Legion patrol, but the Legion become more legion by the day. The group finds an abandoned town and decide to take shelter in a school—the first school Kurena’s ever been to. They take a final roll call, and “graduate” the next day.

When they hit a literal wall of sheer rock, Shin suddenly asks to switch with Anju, who is piloting, claiming he’s bored. Once they switch, he cuts the tether to split off from the others and uses his grappler to bring down some rocks so they won’t follow. He sensed more Legion were coming; Legion they wouldn’t escape unless he lured them away. The others aren’t okay with this. Raiden, Anju, Kurena and Theo all agree to go after him.

With no Juggernauts, they have to go on foot, and arrive just as Shin’s ride is trashed and a Legion prepares to crack it open like a tin of sardines and claim his head. Only the weakest of the charging Legion are susceptible to their small arms, and even then only headshots, and there are too many of them. First Theo, then everyone else goes down fighting. The light of the Legion prepares to take Shin’s head—but he has his sidearm. Does it succeed? 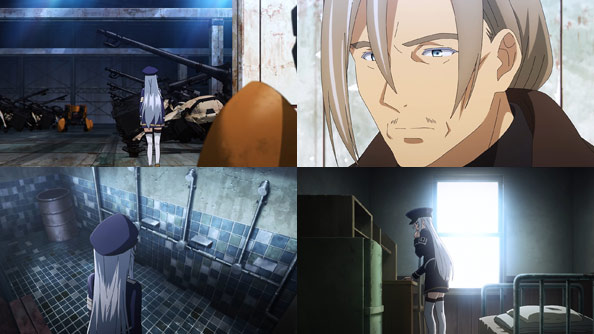 We finally check in on Lena, who is under house arrest for her little stunt with the mortars. Even so, she pays a visit to the front lines, and to Spearhead’s HQ. A new group of 86 are being processed. The cycle continues.

Lena is greeted by Lt. Albrecht, who reveals he’s an Alba like her whose wife and daughter were 86 and died in battle. Thanks to Shin, he was given a measure of solace in knowing they didn’t become Legion, as Shin never heard them call Albrecht’s name.

Lena then walks through the now abandoned living space like a ghost looking so out of place after having been in essentially another world the whole time. It’s just so heartbreaking that by the time she was finally able to make it here, everyone she spoke to over the Para-RAID was already gone. 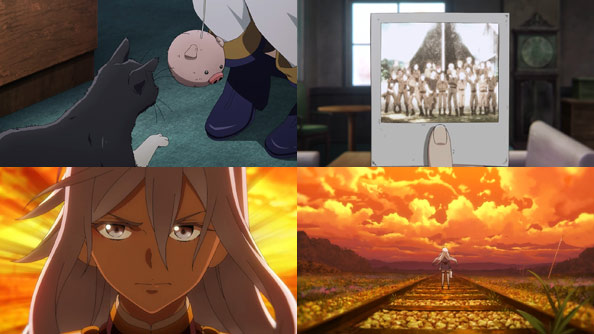 While the cycle of using 86 as cannon fodder continues, there was at least a crucial change. Lena and Shin forged a genuine connection, and it rubbed off on the others too, as they left her a memento: Theo’s drawing of her with handwritten notes from him, Shin, Raiden, Kurena, and Anju. More importantly, they left a Polaroid of the whole group, helpfully labelled by Theo “so she wouldn’t cry” about not being able to tell who was who.

In the end, as a practical matter, all Lena was able to do by breaking protocol and getting in trouble was extend the five’s lives by a few more days. Instead of dying on one battlefield, they died on another. But with Fido gone and his records destroyed, Lena now holds some of the last remaining artifacts of their existence—other than the wrecks and bodies they left behind somewhere out there, after reaching their final destinations.

Lena will surely treasure these things, as well as the cat left in her care, but they’re also primed to fuel her continued rebellion against the broken evil system she’s blindly served for too long. She couldn’t end the injustice for Shin and the others, but perhaps with enough allies and some luck, she can end it for others. Or maybe not. But like them, she’ll fight until fate comes for her.

Maybe then they’ll all get to finally reunite…for the first time.

So ends the first cour of 86. What a powerful show. We’ve known since the start there would definitely be a second one, but now we know there will be a “Special Episode” in between the two. What I’m a little fuzzy on is what exactly became of Shin.

I’d like to hope he managed to shoot himself in the head, and that seems to be supported by the fact he reunites with his brother, whom we know he freed from the Legion. We also see Shin’s headless body. But nothing is certain, which is why I’ll just have to keep watching to find out.