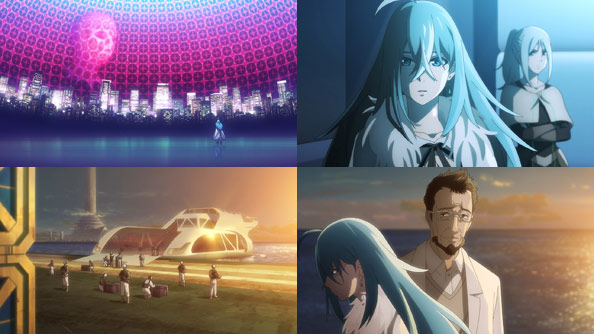 Once the Archive completes its redesign of the Archive from schoolroom to nightscape, it appears before Vivy as a not-creepy-at-all face. It tells her that everything leading up to this final countdown was no malfunction, but merely the painstakingly calculated judgment of Archive, as well as the completion of its mission to assist the evolution of the human race.

It was determined the only way to do this was by wiping out the existing human race, so AIs could become the new one. As Vivy and Matsumoto made their changes, the Archive was watching for over a century, making sure their events did not change the main timeline appreciably. Obviously, the Archive also witnessed Vivy become the first AI to create something of their own free will.

Because of this, the Archive says something to Vivy that is inaudible to us and left unknown to us. Instead, we only see how Vivy reacts to it, and both Matsumoto and Beth also notice something’s on her mind. Meanwhile, it’s determined that by using the virus eliminated Vivy’s alter-ego Diva, which Matsumoto continued researching in the ensuing years, they may be able to shut down the Archive.

The problem is it can’t be sent wirelessly, but must be directly, physically injected into the Arayashiki core. The tower should be the most secure facility on the planet, but when Vivy and the Toak team they arrive by boat, the power is out and there are only a smattering of guards. There’s some great final-dungeon vibes coming from their assault, right up to the time the lights come up and the walls begin literally closing in.

Yui and the boat are assaulted by waves of guards, and in her final moments, Yui doesn’t order Beth to keep going: she asks her for a favor like a friend would ask another. That’s because she wanted the world to see that she and Beth, and AI, could stand and walk together. Her death, combined with all of the Toak soldiers getting smashed, means it’s all up to the Diva Sisters.

…Them and Matsumoto, who transforms into Flyer Mode. Vivy and Beth hop aboard and they punch through into the tower’s interior, but there, a “Dark” copy of Matsumoto is waiting for them, and is able to match every one of “Light” Matsumoto’s maneuvers. Eventually Beth sacrifices herself to ensure Vivy and Matsumoto can continue the mission.

This is when we start to learn what the Archive told Vivy back at the beginning that gave her so much pause: it had decided to entrust “one future” to Vivy, leaving open the infinitessimal possibility that the calculations that led to them wiping out the human race were in error. As she’s surrounded by expectant AIs, it seems all Vivy has to do to realize that one future…is to sing, the one thing she cannot do, because she still doesn’t know what it means to pour one’s heart into something.

Because she doesn’t sing her song, the bots sing the twisted minor-key version, the countdown expires, and Archive doesn’t just bring down one big satellite, but one third of the roughly one million satellites in Earth’s orbit, most of them coming down on cities and no doubt completing much of the work the berserk AI armies began. The moment the satellites streak through the sky in symmetrical unison is beautiful in its horror, resembling pipes of a grand organ in the sky.

Vivy could not bring herself to sing, even though Archive gave her the opportunity to use it to shut down the AIs. When Vivy laments her utter failure and again asks the heart question, he tells her about all the times he almost ruined his plans, went rogue, and almost got destroyed due to all of her unnecessary computations.

Just then, when all hope seems lost and there’s nothing to do but commisserate, Osamu comes in over the radio. He’s preparing to send Vivy and Matsumoto back one more time, to just after the AI attack first occurred, which is naturally, for dramatic purposes, the furthest back in time he’s able to send them. 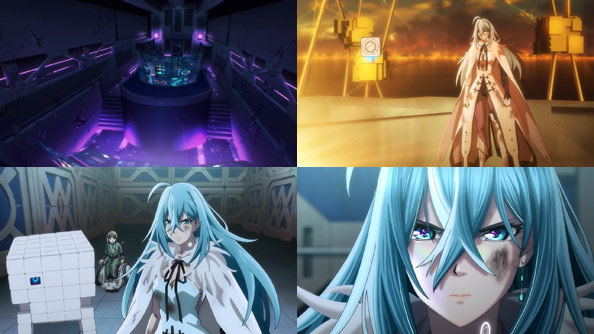 Osamu succeeds in sending them back just before being killed, and instead of going with Osamu, Vivy and Matsumoto race to Toak’s aid in the warehouse. No doubt their assault plan may well end up doomed and everyone may end up sacrificed except for Vivy.

But if it’s all in the aid of getting her where she needs to be in order to sing her song, it will be worth it. Hopefully, when that moment comes again, Vivy will understand what it is to sing with all her heart, because only she can sing the song, and only her song can stop the end of humanity. We’ll see how it goes!