As those who share Kiichi’s views grow in number, he still finds time for tea with Yuugiri, who whips up a medicine for his ailing grandfather. Kiichi and Itou pose with Yuugiri for a photograph, which for me meant that somewhere in the present day there’s a very old black-and-white photo of the Legendary Courtesan out there—assuming it survived the war.

However, those who have joined Kiichi don’t necessarily want a new Saga for all; they want their old Saga back, and as many of them are veterans of the war lost eight years ago, they’re willing to take up arms and spill blood to do it, which is far beyond the peaceful return of Saga of which the idealistic Kiichi dreams.

Itou, in between ripping down Kiichi’s flyers and passing messengers disguised as vagrants, gives his friend one final warning to give up his crusade now that it is poised to become a violent one beyond his control. But Kiichi isn’t quite ready to give up on Saga, either for himself or the comrades he’s gathered.

Unfortunately, those comrades armed themselves and planned an armed rebellion behind Kiichi’s back. On the snowy night when they spring into action, Itou meets them in a quiet street…and cuts them all down on orders from the government. 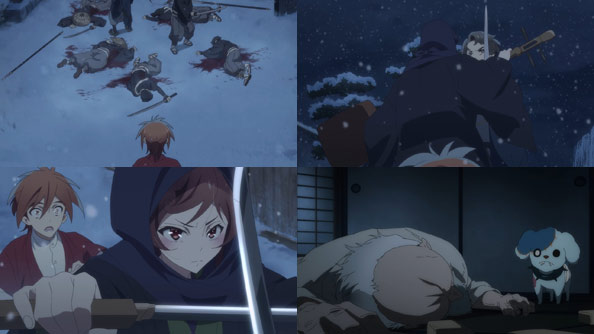 By the time Kiichi catches up to his comrades, Itou has already slaughtered them all. It turns out he was watching out for spies all along, and while he knew Kiichi didn’t mean for things to turn out this way, he’s crossed a line he can’t un-cross, and now it’s Itou’s duty to kill him.

Yuugiri doesn’t let him, whipping a katana out of her shamisen to meet his, saving Kiichi’s life. When the local police approach with whistles blaring, Itou flees one way while Yuugiri and Kiichi go another. All the while, Kiichi’s gramps is having some kind of attack and collapses before he can reach the medicine. 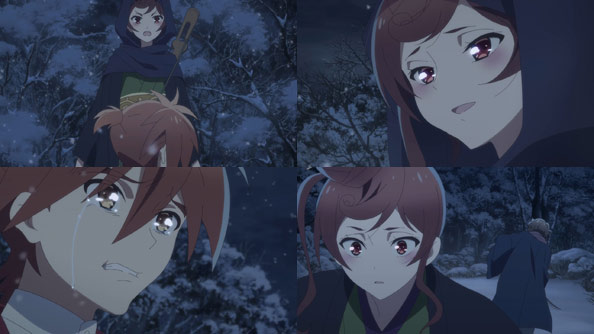 After losing the fuzz, Kiichi starts to sob and whine, and Yuugiri slaps him, telling him he’s come this far for Saga’s sake and can’t give up now. As we saw in a previous scene, she’s already written to some of her many powerful friends who have sworn to protect Kiichi until things cool down. Kiichi doesn’t want to leave the Saga he loves, but he listens to the legendary savior whom he loves.

By the time Itou finds a casually smoking Yuugiri, Kiichi is long gone. Yuugiri forewarns that she was trained by someone called the “Sheathed Kichiemon”, whom Itou knows as “The Demon of Hibiya,” and thus knows he can’t go easy on her. In the ensuing one-slash duel, Yuugiri bests Itou, killing him, but is shocked that he let himself be killed.

No doubt if Itou failed to kill Kiichi, he was as good as dead anyway; he simply let Yuugiri take care of him for him. And with the snow ceasing and the clouds opening up to reveal a majestic full moon, Yuugiri accepts her fate. The next morning, Gramps wakes up and finds a letter from Yuugiri amongst the medicine.

In it, she says by the time he reads it she’ll likely be dead; beheaded by the military in a unilateral execution for killing Itou, a government official. Interspersed with her beautifully lit and solemn execution scene, she tells Gramps that if he’s truly “Saga” (as in, the human embodiment of Saga) as claimed, he’ll guide the new Saga Kiichi creates.

The following spring, May 1883, Saga re-gains independence from Nagasaki thanks to a peaceful appeal from supporters in the prefecture, and by August, unilateral execution was banned, and just nine days after that, Kiichi’s dream officially came true, as the first Saga prefectural assembly is held. Yuugiri’s death, and that of Kiichi’s comrades, weren’t in vain. 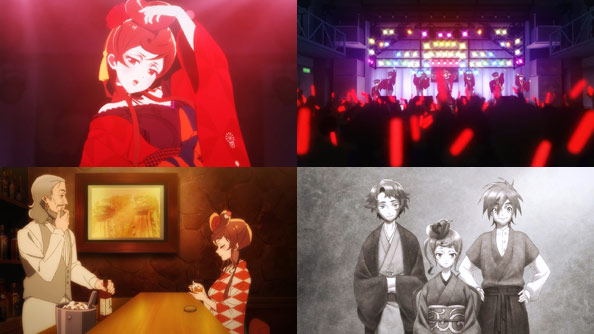 With that, we find ourselves back in the present, as Yuugiri takes center stage in a bopping swing-style concert, resplendent in period-inspired garb as her fellow idols support her. This particular concert hits different now that we’ve seen everything Yuugiri’s been through to come to this part of her (after)life.

In a very cheeky epilogue, she has some very nice whiskey in a very classy bar tended by a man who looks and sounds like a younger version of Kiichi’s gramps. He is aware that Yuugiri was alive in the Meiji era, and the black-and-white photo of her with Kiichi and Itou is behind the bar, so this guy must really be the immortal Saga.

Not only did this two-parter give the legendary Yuugiri the epic backstory he deserved, in which she was revealed a hero, martyr, and unsung founding mother to the new Saga—it also expands the mythos of the show by introducing an undying character who has been on the margins of this whole story all along, and may well be behind the necromancy that brought Yuugiri and the other idols back. In any case, I’m eager to see where this goes!

One thought on “Zombieland Saga: Revenge – 09 – The Legend Continues”