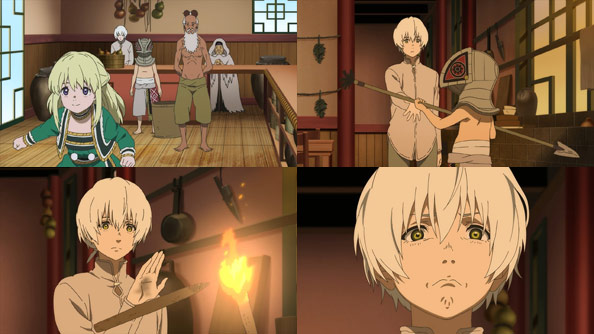 “Skip Intro” is a well-established and often useful feature to our world of streaming entertainment, but I make it a point to watch every second of To Your Eternity’s OP every week. I can’t not, and not just because “PINK BLOOD” fuckin’ whips. Every time I watch I go through the heartbreak of losing both the arctic boy and March as well as Parona’s trauma all over again. The OP continues to grow more powerful as Fushi progresses on his journey and we meet more of the faces it presents.

Two of those faces are of Gugu (or rather his distinctive mask) and Rean, and the latter (voiced by Iwami Manaka, the voice of Honda Tooru) suddenly decides she’s going to live and work at Booze Man’s place from now on. Gugu isn’t sure what to think about this, because while it will be nice to see more of Rean, the fact she likes Fushi and not him will make things uncomfortable, if not painful.

Then again, pain promotes growth. When Gugu asks “what else” Fushi can do besides transform, he creates a spear. Gugu cuts him with a knife, and after healing, Fushi creates a duplicate knife. When Gugu burns him with a torch, Fushi can only create the stick, not the flame…at least not yet. In reaction to all this “experimentation”, Fushi produces a Marchface, indicating he doesn’t like this.

When Rean shows up bright and early, Fushi still hasn’t come in for work; we later see he’s assumed his wolf form and is sleeping away the day. Gugu asks Booze Man for something Rean can use on her wound, and the coot unexpectedly uncorks part of Gugu’s face and bumps out a strange liquid. When Gugu learns the Booze Man gave him a “new organ” where liquor is stored and ferments (hence his distended belly), Gugu is furious, and runs off.

As usual, the old people are only thinking about themselves. Booze Man wants the valuable booze inside Gugu back, while Pioran is worried about who will cook their meals. Rean is loath to go looking for Gugu since she’s not yet an established part of the “family”, while Fushi outright refuses, still sore over how Gugu treated him in the kitchen, and rightfully scared of the forest besides. He volunteers to cook, but ends up simply boiling a daikon with no salt. 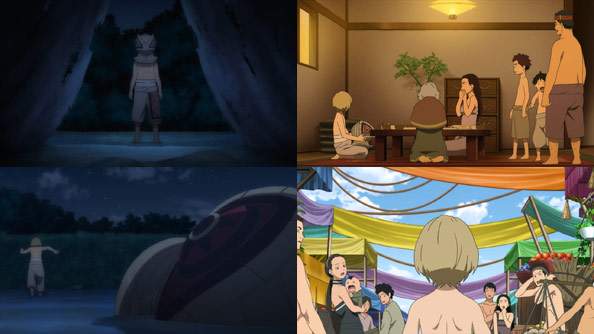 Still, no one comes to look for Gugu, who returns to the tattered tent he and his brother once shared. He gets his job tilling the land back from a kindly father who even invites him to join his family. Unfortunately his kindness and empathy weren’t inherited by his sons, who know about the rumors around town that Gugu is a monster.

Gugu agrees with Chan that he can’t be in a family if the members can’t love one another, and removes his mask to determine if they’ll be able to love what they see. It goes about as well as you’d expect. Later that night while sulking outside, some older kids steal his mask and throw it in the stream, but after realizing the mask doesn’t actually do anything, he throws it right back in, walking through town the next day. Let the people gawk in horror…the faces they make are funnier than his! 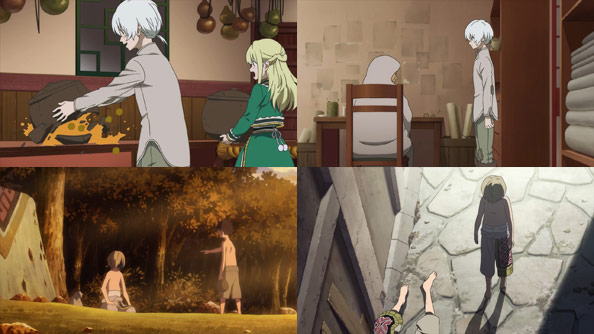 Fushi’s attempts to cook, clean, mind the shop, and work the fields all end in failure, but when he asks Pioran (by name!) to teach him those things, she soundly refuses, not moved by the March-inspired dirt balls he offers as tribute. For one thing, she’s got better things to do with her time—sitting around drinking her lover’s excellent booze, for example. For another, she doesn’t want to spoil him, and the best teacher he could ask for isn’t her. It’s Gugu.

Gugu settles back into a routine and puts on a little muscle working in the field, but Chan visits his tent and splashes water on him, telling him not to come back, saying it’s because his dad is such a good man that he doesn’t want Gugu causing trouble with his freakishness. Without work, Gugu runs short on funds, but remembers he has the ring Rean gave him.

It’s clear from the look of the merchant that it is indeed worth enough to ensure Gugu never has to sell produce again, but Gugu can’t see what a monster like him would do with that kind of wealth. So when he discovers his drunk, emaciated brother lying in an alley, he gives the ring to him. Even in his current state he’s better off with the ring than a monster. But while he gives Shin the ring, he doesn’t acknowledge him as his brother. He doesn’t have a brother anymore.

Of course, that’s just not true…he has Fushi! Fushi needs Gugu, and as we see when Gugu is scooped up in the night by bandits prepared to sell him to people a taste for freaks and the cash to spend on them, it becomes apparent Gugu needs Fushi as well.

Fushi bowls into the bandit carrying Gugu in his wolf form, and when the guy and his partner stand their ground, he transforms into the Bear, who, let’s be honest, no one other than Hayase would ever think about fucking with!

With that, the Monster Brothers Gugu and Fushi are reunited. Gugu resented Fushi for being admired by Rean, while Fushi resented Gugu for cutting and burning him willy-nilly, but they’re able to get past that, because that’s what brothers do—well, good ones, anyway…