Yuru Camp takes a quick look back at when Nadeshiko was saying a tearful goodbye to her best friend Ayano; and I agree with the commenter that Kurosawa Tomoyo is a perfect voice to match Aya-chan’s personality—I just wish Kurosawa voiced a main character! Aya assures Nadeshiko that she’ll make new friends (which she does) and says that once she’s in a new place, she should try a new thing.

That new thing turns out to be camping up an absolute storm, culminating in this latest group trip to the geospot and lookout-packed Izu peninsula. After a refreshing breakfast of sashimi rice bowls, the group heads to Dougashima and the famed tombolo of Sanshiroujima. Akari is heartbroken to learn, her big sis was having her on; “tombolo” isn’t food, but the sandy bridge between islands that appears during low tide. 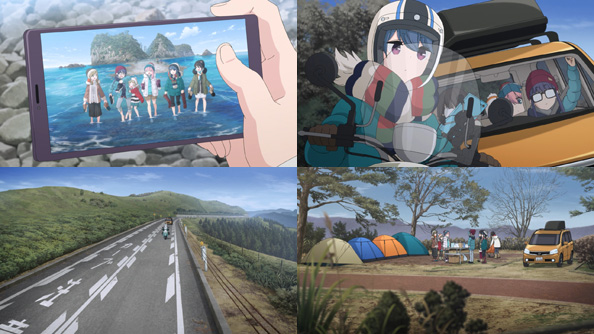 Removing their boots and braving the frigid waters, the group crosses the shallows and explores the island before the tide comes in. Nadeshiko thinks this would be a perfect spot to visit in the summer when the water is warm enough to swim in, leading to what I believe is the series’ very first cutaway to the girls in swimsuits.

From there, Rin takes point in her 30km/h moped for the drive along the glorious Nishiizu Skyline to their campsite. I can’t help but recall a similar drive I took up Mount Evans, on the highest paved road in North America. Evans is 2km taller than Fuji-san, so you can imagine words will hardly do the majesty of the scenery justice. It truly is, as Rin says, like driving in the sky.

Once they arrive at the Daruma Forest Campsite on the Darumayama highland, Aki, Rin and Ena start prepping for dinner early, while Akari leads the birthday girls Nadeshiko and Aoi away to check out the baths near Cape Mihama (which is sometimes mistaken for Cape Ose). To Akari’s shock, they already know a birthday meal is being prepared, since Aki specifically told Aoi that back at school, and their grocery shopping included things like whipped cream.

But even though it’s not a complete surprise, Nadeshiko and Aoi are still delighted by the celebration prepared by the others, who go all-out with decorations, a (pancake-based) cake, and the gift of durable and easy-to-maintain wooden cooking pans. 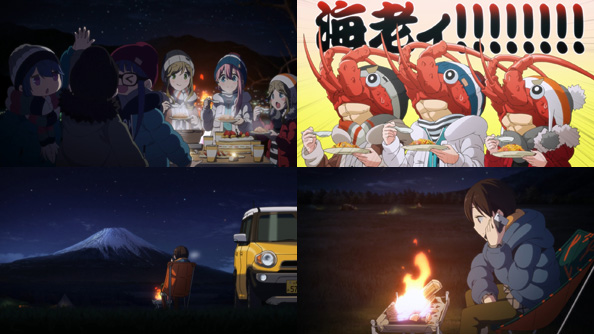 A suitably sumptuous feast of shrimp and tomato risotto awaits, made with spiny lobster broth and made extra-shrimpy by the addition of a highly-concentrated shrimp sauce. While Toba-sensei is enjoying the snacks the girls prepared to go with her booze, she gets a call from her Ryouko, who is herself solo camping much closer to Fuji-san out of her sister’s Suzuki Hustler.

Ryouko can tell her sister isn’t that drunk (yet) and congratulates her for being a good advisor. Minami admits she “wasn’t too keen” on becoming one at first due to the time it took up, but watching her students growing up before her eyes, she totally gets the appeal now!

With everyone now on the same sleep clock, the girls eschew movies and head to bed early so they can get up in time to watch the sun rise from the peak of Duramayama. The extra 500-meter climb nearly kills Aki all over again, but Rin and Nadeshiko reach the top first with time to spare, and Nade prepares instant miso soup with more of the spiny lobster broth, telling Rin the shell can be used more than once and even ground down into powder for future use.

While Toba-sensei stays in the van with a still-sleeping Akari, Aki, Aoi and Ena join Nadeshiko and Rin at the top, and the three formally bow and thank Rin for saving them. They also intend to visit the Iidas to properly thank them (and play with their adorable Corgi, Choko).

Then that sun rises and begins to bathe the landscape in its warm, silky light, rewarding the girls for their effort. Did I mention that shortly after starting this show I’ve started getting up early to watch the sunrise? There’s really nothing quite like that light. Yuru Camp isn’t just about immersing yourself in its warm and fuzzy therapeutic goodness, but inspiring you to get out there and give something new a try, as Aya urged Nadeshiko to do.