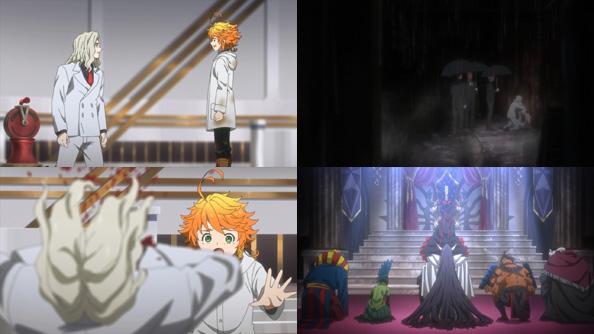 I thought of those sage words—spoken to end a discussion of whether another ending was happy or sad—after the end of The Promised Neverland. This finale was, without a doubt, a series of scenes where dialogue is exchanged and things happen. 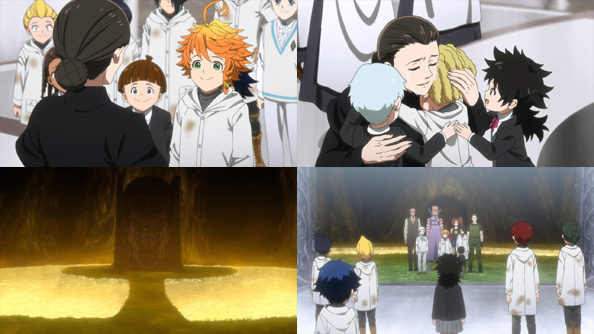 And yet, it’s also an episode that tends to drag and sag during lengthy dialogue scenes. Starting the episode with Peter’s backstory, such as it is, was an…interesting choice? It really did nothing to make me care about him one way or another; I’m not surprised in the least he had his own brother Minerva killed, or that he rejected Emma’s call to join her in building a new world.

Ratri would rather slit his own throat (which he does) then even try to live in such a theoretical world; going out as a “Ratri”, descended from those who originally negotiated the great pact that split the human and demon worlds in two. Isabella and the mothers, who all seem to speak with one united voice, are also initially reluctant to go with Emma, who manages to convince her to change her mind. All is forgiven!

Now for the journey to the gate to the human world. Wait, the elevator takes them right there? And the pen, already literal deus ex machina, also happens to unlock the completely unguarded gate? Oh, and Emma, along with Norman, Ray, and the Lambdas, decide not to go through that gate? I commend the composer for accompanying the gate scene with suitably epic music, but other than that it’s just a lot; all at once, and all too easily. 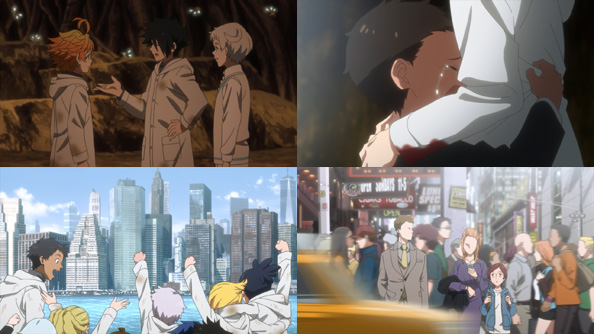 The decision to remain while Don, Hilda, the mothers and the kids all go ahead to the human world is simple: Emma’s job won’t be done until all the farms are shut down. With Mujika’s help, she intends to create a new pact that won’t allow demons to raise children for meat anymore. So I guess Sonju was just joking when he was hoping to eat some free-range kids in the near future?

I was also a little worried when Emma and the others not going through the gate simply left them without checking out if it’s even safe on the other side. Those worries were short-lived, as beyond the white void is…modern-day New York City, immediately followed by an unanimated slideshow of the kids gradually assimilating to life in such a world. Judging from the stills, they don’t have much difficulty at all!

We then switch to a slideshow of Emma & Co. on their crusade that for all I thought would take the rest of their lives. I mean, you’re talking about rescuing each and every child currently imprisoned in the demon world. It’s a herculean effort many times larger than the already ridiculous operation that liberated Grace Field House in a single night with zero casualties.

But nope, it only takes a couple years or so. Emma, Norman, and Ray just suddenly appear by Hudson Bay one day, their mission apparently accomplished. Phil’s happy about it, because he doesn’t have to make good on his promise to go back after her. It’s all a little sudden, and random, and rushed, and weird. All my goodwill was spent mindlessly enjoying last week’s all-too-easy victories.

So it’s a totally, completely, 100% happy ending for Emma and the kids, who’d basically ceased enduring serious hardship or encountering setbacks of any kind after being forced out of their bunker hideout. But for me, it just feels like an ending, and a blessed one, as my enthusiasm for the direction of the story was waning by the day. An ending is enough.

Read Crow and Irina’s discussion on the final episode of The Promised Neverland right here!