The identity of Cool Campin’ Gramps is quickly revealed: he’s Rin’s grandfather, which makes sense as Rin must’ve caught the camping bug from him. It also explains why Rin has a loop-style tent rather than the commercially ubiquitous sleeve-style; we learn it’s a hand-me-down from her gramps. As for camping, she’s been doing it since her first year of middle school.

Rin and Nadeshiko have the lakeside to themselves but for one other couple: a friendly young lad (or possibly lass) with a wealth of fancy cooking gear and a woman in a hoodie surrounded by cans of beer and flanked by twin bottles of rum. While walking around to take some photos, Nadeshiko introduces herself but doesn’t pry too much, assuming they’re a couple couple and repsecting their privacy.

Nadeshiko returns to find Rin surrounded by a dark miasma—she’s used all of her firestarter but has no fire to show for it. Turns out starting her new grill isn’t as easy as the videos indicated. Nadeshiko immediately proves her value and asks the lad she met earlier to help them out. He lends them a couple instant-light briquettes to get the more fussy Binchoutan coals going.

They thank their camping neighbor and start cooking immediately, starting with grilled skewers and haddock hot pot. We learn from their conversation that the woman accompanying the lad is his older sister, who will soon start work as a high school teacher. If it’s at Rin and Nadeshiko’s school, I can see her ending up the Outclub’s faculty advisor…she’s certainly got Laid-Back down!

As thanks for helping them start their fire, the girls head back to their neighbors to offer some of their completed food, and the lad in turn offers some of his jambalaya, as too much was made for just two. The older sister offers rum, but her brother asks them to ignore her. They’re both pleasantly surprised by the high schoolers cooking skills.

After stuffing themselves on skewers, kalbi, and Hamburg steak, Rin uses the still-glowing coals to start a little wood fire to warm their bones before bed. Rin then learns Nadeshiko is originally from a town near Hamamatsu, where she had a view of Fuji-san, but he was tiny. The day they moved to Yamanashi, she fells asleep in the car and missed a much closer view, which is why she biked up to the campground where she and Rin met.

Now we know that were it not for Nadeshiko’s nodding off, they wouldn’t have met at Lake Motosu and had that lovely first taste of camping together that they’re now fully realizing. The hour grows late, and Rin starts nodding off first, so she heads into her tent, refusing to let Nadeshiko sleep with her as it would be too crowded. I dunno…it looks pretty roomy in there!

After sharing some face lotion with Nadeshiko, knowing from experience what campfire dries out the skin, Rin turns in, but thanks Nadeshiko through the tent for inviting her to go camping. Next time, she’ll be the one to invite her.

Rin wakes up in the middle of the night to go to the bathroom, and is rewarded with a gorgeous and serene view of the lake at night. All of Nadeshiko’s talk about the bull oni that sometimes appears on the lake causes Rin to mistake the drunk, vomiting sister for the oni, causing her to  freak out and book it back to the campsite.

And so, even though Rin wouldn’t let Nadeshiko sleep in her tent, a spooked Rin ends up slipping into Nadeshiko’s. The next morning, Nadeshiko wakes up first, notices Rin is there, and rolls herself over so they’re closer together, in what could be the cutest moment of the show to date. Once they’re both up and ready to break camp, Rin elects to go back the way they came, while Nadeshiko rents a boat to get to the other side. To each their own!

Talk of bull oni aside, this was a particularly laid-back and relaxing Yuru Camp. Other than the brief scene with Rin’s mom and granddad it’s just Rin and Nadeshiko plus their amenable camping neighbors. With their chemistry, there was never any doubt that Rin and Nadeshiko would make great camping companions. I also tend to agree with Rin that while all camping locations have their charms, there’s no substitute for the unique coziness of a wooded lakeside. 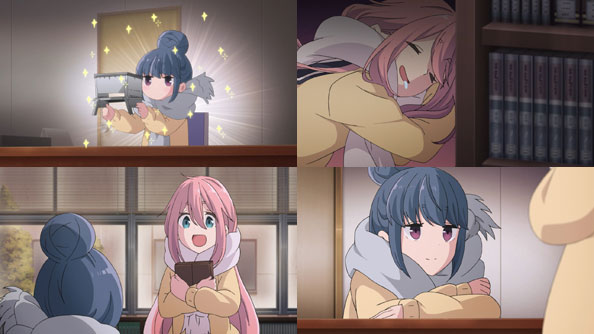 Rin should close up the library, but the heater is so nice she’s hesitant to leave. She realizes she has a package in her bag, and opens it to reveal a collapsible compact portable grill, which is a pretty nifty bit of kit. She also has yet to bump into Nadeshiko in order to give her her gift of chocolate buns from Nagano, but as she tells Ena, she just “can’t get used to the vibe” in the Outclub room.

Rin’s reluctance will soften at some point, what with the opening scene of the series showing both Rin and Ena camping with the Outclub. And her gateway drug to the Outclub is Nadeshiko, whom Rin finds sleeping in the stacks, also enjoying the library heat. Rin can’t help but smile watching Nadeshiko quickly house the chocolate buns.

Knowing that watching Nadeshiko eat something makes that thing look at least twice as delicious, she agrees to go with her on a camping trip, which will also be an opportunity to put her new portable grill—which both Ena and Nadeshiko initially mistake for a metal offertory box—through its paces. 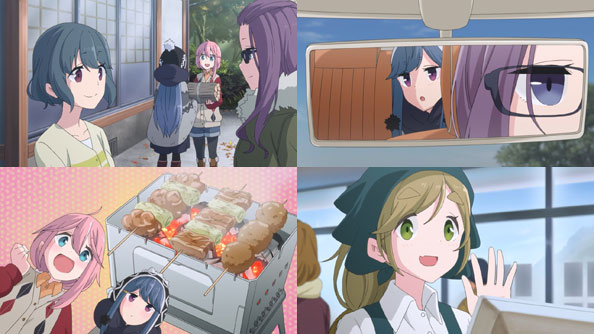 After five episodes of beating around the bush, it’s finally happening: Rin and Nadeshiko are officially taking camping trip together. It was nice to see Sakura, apparently the only fam Nadeshiko has, meeting Rin’s mom, who may be Rin’s only fam. Rin is also struck by Sakura’s beauty, especially in contrast to her “blah” kid sister!

Sakura has agreed to drive them to the Lake Shibire Campgrounds, a little-known spot among the five lakes recommended by Chiaki for their autumnal splendor. Rin and Nadeshiko hit up the supermarket first, and while they’re initially crestfallen by the lack of pork jowl, horumon (offal), skirt, tongue, and ribeye, they do find some convenient and tasty pork and chicken skewers, while Nadeshiko plans to make a mini hot-pot as well.

Their feast thus purchased (and rung up by none other than Aoi, who just so happened to get a job at that particular supermarket), Sakura drives them the rest of the way. Meanwhile, Chiaki is already scouting out another campground for the Outclub’s next excursion, and meets one classy grandpa living his best life in the woods with a single pole tent and a big steak cooking on a cast-iron skillet.

Rin and Nadeshiko arrive and soak in the lovely foliage, then head to the other side of the lake where their campsite is located. Sakura orders a hot chai and takes in the scenery on her own before heading back, planning to return tomorrow at noon. Nadeshiko insists her big sis loves driving—and with that ultra-cool Rasheen, I can’t blame her!—but I felt she put out kind of a lonely vibe this week.

Maybe I’m just misreading her neutral expression. At any rate, I’m super-excited for Rin and Nadeshiko’s first official camping trip. Nadeshiko may crumple at the mere mention of ghosts, such as that of a cow believed to haunt the lake, but with someone as tough as Rin as her campmate, she has nothing to worry about. If anything, that ghost cow should worry about being turned into ghost barbecue! 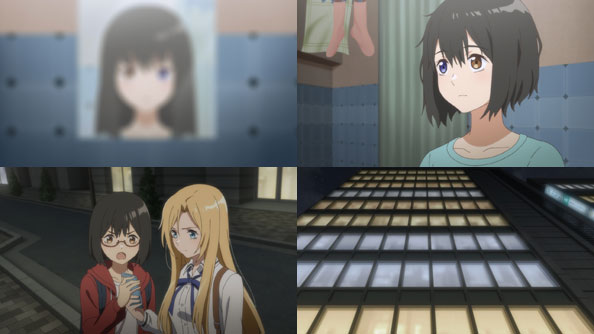 Looking in the mirror without her glasses, Sorawo sees a longer-haired version of herself. She’s still clearly troubled by Akari’s comment about her perceived resemblance to Uruma Satsuki. That night she goes out for barbecue in Ikebukuro with the gang, and the American soldiers trapped in the Otherside come up for the first time since she and Toriko left them there.

That doesn’t sit right with either of them, particularly Toriko, and Sorawo wonders if Lady Hasshaku’s hat (which apparently still exists) can still provide them with a way to get back there to rescue them. But that’s put on hold when they get a call from Akari. She’d gone up ahead to get their table, but the elevator started strangely, and now she’s lost.

More worryingly, while on the phone with Toriko and Sorawo, she sees an illusion of them and assumes it’s them, drawing her even deeper into the rabbit hole. The other two conclude that the elevator of this Ikebukuro building operates the same way as the one in Jimbocho—as a gate to the Otherside. And Akari got off early. 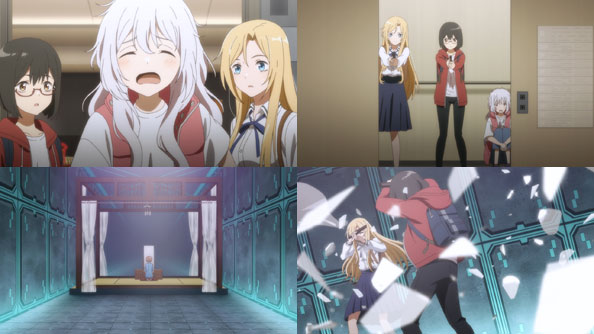 They head to the elevator and go through the same process as in Jimbocho they’ve executed dozens of times, if not more. They’re joined at the last minute by Kozakura, who unlike them is not used to this stuff and is scared out of her wits the whole time, a far cry from the collected demeanor when she’s home.

Eventually the elevator opens on the floor where a monstrous girl tries to get on, but instead they see Akari. Sorawo decides to get off here to follow her, and Toriko and Kozakura follow her. Eventually they find Akari seated at a vanity mirror, only to vanish. Sorawo uses her eye and Toriko’s hand, but end up shattering the mirror.

That seems to take them from the In-Between world to the Otherside, which takes the form of a dark corridor full of shuttered stores. Sorawo finally gets Akari to turn around; from her perspective she was chasing them, not the other way around. Suddenly, Sorawo’s eye and Toriko’s hand start to tingle—call it their Othersidey Sense.

The white glowing form of a woman, probably Satsuki, appears from a distance, then creates a thick blue cloud of smoke. The four turn tail and run for it, initially finding themselves in a continuous loop before emerging at the In-Between. Kozakura starts to fall behind, but urges the others to keep running and not slow down.

The four manage to get to the elevator, and shoot the smoke until it retreats, but after a few moments of rest it comes back with a vengeance. Sorawo wakes up to find everyone else unconscious, and the elevator doors open to reveal Satsuki standing over what looks like a volcano…or possibly just a massive barbecue? Sorawo directs her eye and the unconscious Toriko’s hand at the two, and she’s out again.

This time, everyone comes to, and the doors open to reveal the barbecue restaurant; they’re back in the normal world. Akari heads over, having made a reservation for four in Sorawo’s name. When Akari asks her what the heck just happened, Sorawo says “Don’t ask me. I have no idea,” which is both fair and accurate.

But with stomachs growling impatiently, perhaps it’s best for everyone fill up with grilled meats, knock back a couple brewskis, and count their blessings. Whatever happened, they survived it together. And now they know that any building of ten or more floors could potentially be a gate to the Otherside.