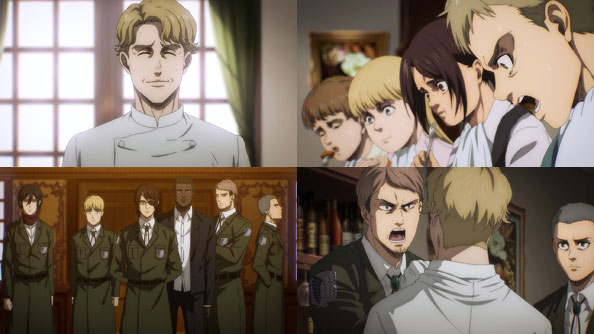 One quiet afternoon, the fancy restaurant at which Niccolo works suddenly becomes very busy. First, the Blouses arrives with “Ben” and “Mia” in tow, to take him up on his offer to cook the meal he wanted to make for Sasha. Kaya tells them Niccolo is the Marleyan they should speak to. His food is the best any of them have ever eaten.

Not long thereafter, Hange and the Scouts arrive with Onyankopon to discuss some things with Niccolo. He sets them up in the private room where them Military Police often ate and drank. When Jean picks up a bottle of “special” red wine, Niccolo picks a fight with him and snatches it away.

Of course, we know, and later find out why he’s acting like an anti-Eldian ass to cover for the fact he’s saving Jean’s life, because that wine isn’t meant for Jean, and not because it’s too good of a vintage. 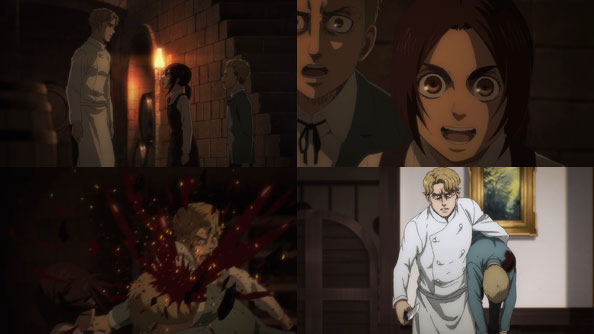 When Gabi and Falco spot Niccolo heading down to the cellar on his own, they excuse themselves from the table to meet with him. But while they weren’t wrong to seek aid from their Marleyan countryman, Niccolo just happens to be the absolute worst countryman they could have encountered.

As Gabi gleefully reports she killed a woman on the airship, Niccolo realizes these are the kids who killed his Sasha. Falco can see the change in his demeanor, but Gabi doesn’t. Niccolo tries to brain Gabi with the suspicious bottle of wine, but Falco pushes her out of the way and takes the hit.

Then he takes them both upstairs to present them to Sasha’s parents, along with a knife and the promise that if they don’t want to kill them, he surely will. 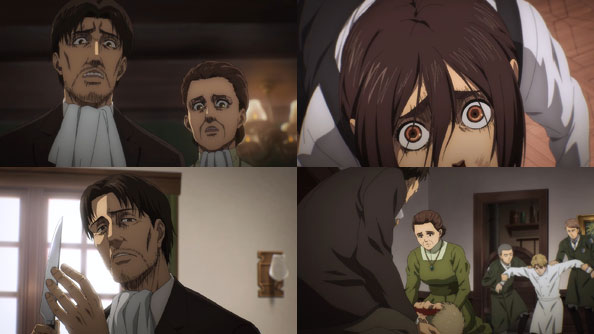 When Gabi sees the faces in Sasha’s parents’ faces, she automatically assumes they’re the looks of hatred and murderous rage. That’s certainly what’s emanating from Niccolo, who deduces from the way Falco shielded her that he’s someone important to her. Sasha was that someone to him, despite being a “descendant of demons” she saved him from the war by loving his food more than he’d ever seen anyone love anything.

Gabi tells him that Sasha “started” the killing by killing her friends (i.e. the Marleyan guards she shot), and she was only avenging those friends. At this point, Niccolo doesn’t care who started the killing, he just wants blood. Instead, Mr. Blouse asks for the knife. As he holds it he has a sobering monologue about how he and his wife raised Sasha as a hunter of the forest.

In the forest, it was kill or be killed, but they knew they couldn’t live like that forever. But when Sasha was exposed to the world, it ended up being just a bigger “forest” where the rules were just as ruthless. In his country drawl, he says to Niccolo that it’s up to them as adults to shoulder the sins of and hatred of the past and not pass them on; to keep the kids out of the “forest”, or they’ll just keep running in circles. 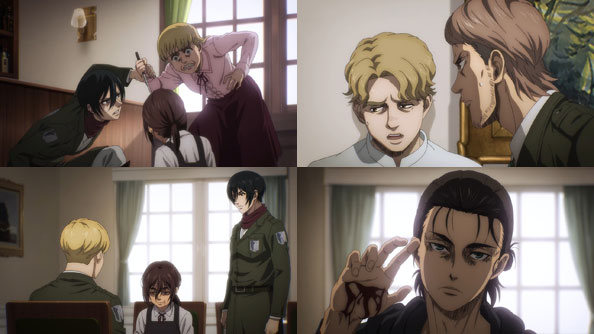 Then he and Mrs. Blouse tend to Falco while Connie and Jean restrain Niccolo. When a crazed Kaya rushes at Gabi with her own knife, wanting to kill the bastard who murdered her savior, Gabi is saved by Mikasa, who along with Armin take Gabi to the other room.

Niccolo tells Hange to wash Falco’s mouth out thoroughly, as when the wine bottle shattered some of the contents got into his mouth. That’s not good, because the wine may well contain some of Zeke’s spinal fluid, which he’d used in gaseous form in the past to immobilize a village in Paradis, as well as enemy cities on the mainland.

Niccolo further explains to Jean and Hange that he was told by Yelena to serve the wine to high-ranking military officials. While the Scouts were told that Zeke’s spinal fluid causes Eldians to freeze up, it could have other effects Zeke simply isn’t telling them about.

In the private room, Gabi asks Armin and Mikasa if they really hate her and want to kill her. We know they don’t, and they lament that a kid ended up in such a shitty position where all she can think of is hate and killing. Armin mentions that it reminds him of “someone he knows”, and right on cue that someone, Eren, enters the room, his hand bleeding like a lit fuse.

While Levi is questioning Zeke back in the forest, he gets a report that Zachary is dead, the walls are under Jaegerist control, and Pyxis has conceded to their demands.

Levi’s messengers think Pyxis is simply rolling over for Eren and Zeke, but Levi knows better; Pyxis is still trying to feed Eren to someone else. Levi looks back on all the times he saved Eren’s life because he thought it was the best chance for humanity’s survival, but seeing the mess they’re in, wonders why he bothered.

Back in the restaurant, a group of Jaegerists arrive led by Floch, taking Hange, Connie, and Jean and Niccolo into custody and demanding Hange tell them Zeke’s location. When Hange says they weren’t going to fight them on this, Floch tells her that Eren decided not to trust Pyxis’s surrender, certain the commander wouldn’t gamble the fate of the island on them.

When Hange tells Floch that wine laced with Zeke’s spinal fluid has been distributed throughout the military, Floch lets on that he already knows with a big playful grin. It’s part of the Plan. I assume Zeke already owns all those high-ranking military police officials who dined at Niccolo’s restaurant, and are currently with Pyxis planning to steal Eren’s Founding Titan.

As for Eren, he’s come for one reason: to speak to Mikasa and Armin, his best friends in the whole world; his brother and sister. No doubt he’s come to ask them to join him…and he’s probably only going to ask once.