One day while having lunch Sorao is approached by freshman Seto Akari, who has heard from the grapevine that Sorao has “the sixth sense” and specializes in supernatural incidents. Akari’s current problem is she’s being attacked…by ninja cats. Sure, why not?

This isn’t really something Sorao can laugh off, as they’ve experienced far worse in the Otherside. Sorao discusses it with Toriko at Kozakura’s house, only to be interrupted by the delivery of a “tobacco farming vehicle” the partners in crime ordered when they were super drunk together. Note to Sorao—Alcohol is a drug! 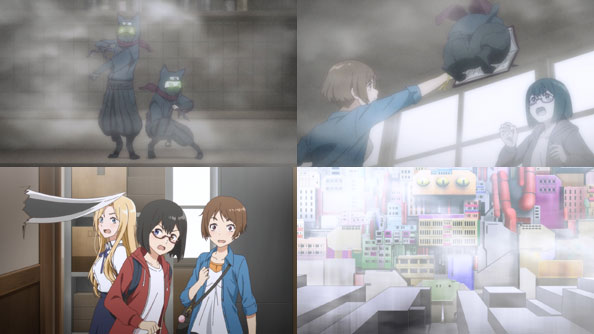 Sorao’s main concern in taking on Akari’s job is that she loves cats, and doesn’t think she’d be able to harm one if it came down to it. Toriko assures her she’ll do the violence this time, if necessary. While meeting with Akari at a (non-cat) café, the two ninja cats appear behind them as the three suddenly find themselves in what Sorao calls “Space-Time Man’s world.”

Before pulling their guns, Toriko says they’ll have to make Akari a fellow “partner in crime”, but Sorao objects, as that’s the term she’s landed on to describe their relationship. No one else can be their partner in crime, so they settle on Akari as a “victim” instead.

In this kind of conduit between their world and the Otherside, one of the ninja cats charges Sorao with a sharp blade, but Akari blocks it with a menu. The three flee the café, only to find a surreal “cat world” outside, and the ninjas still in hot pursuit.

When the ninja prove too quick for Toriko’s gun, Akari, who knows “some karate”, puts her purse down and busts out some moves. I didn’t expect any cool martial arts combat animation, but that’s what we get for a glorious sixty seconds or so. Unfortunately, Akari ends up hitting nothing but air, suggesting to Sorao that they may not have a truly physical form.

When she turns her blue eye on Akari, the girl’s personality suddenly turns twisted, and Sorao sees the source: some strange object inside her abdomen. Sorao lifts up Akari’s shirt, grabs Toriko’s hand, and plunges it into Akari, and Toriko produces a cat-themed good-luck charm, the true reason the cats were chasing Akari. Sorao tosses it away and the ninjas chase after it, leaving them alone.

Sorao wakes up back in the real world, not having had to hurt any kittys, Otherside or otherwise. When asked about the charm, Akari says she got it from her tutor, Uruma. Uruma Satsuki. It’s hardly going out on a limb to say that’s not a coincidence, considering Akari reached out to Sorao and Toriko.