We learn that Susamaru and Yahaba are two of the Twelve Kizuki (Demon Moons), Muzan’s most trusted generals. When they say they’re going to do something—like bringing their master Tanjirou’s head—they usually get the job done.

But that doesn’t mean Susamaru isn’t going to have a little fun, sprouting four extra arms and pummeling the house and its occupants with her six temari balls. Whenever anyone tries to dodge the balls, they change directions, seemingly breaking the laws of physics. Despite appearing to be toys, one of them decapitates Yushirou, forcing Tamayo to fall back.

Tanjirou can’t slash away the balls and protect the others at once. Once Yushirou’s head grows back, he lends Tanjirou his sight, enabling Tanjirou to see that Yahaba is using his arrows to affect the trajectories of the balls. He adapts his offense and defense, gets in close, and lops off Susamaru’s six arms.

Nezuko, who sees Tamayo and Yushirou as family even though they’re demons, attacks Yahaba in the trees, but when she tries to kick one of Susamaru’s balls, it claims her leg, and unlike Yushirou she doesn’t heal nearly as quickly. Through trial and error and suffering quite a pummeling, Tanjirou eventually learns that dodging, countering, or slicing the arrows is useless; he has to make them work for him. 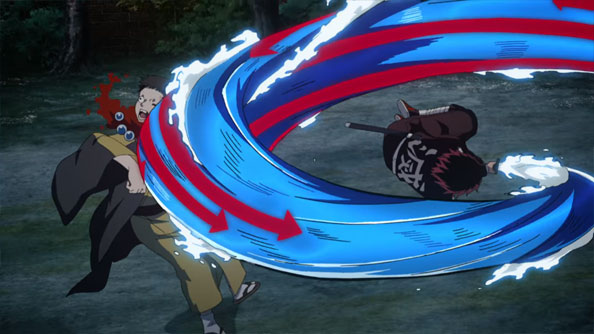 By popping off a number of different Water Breathing Forms, he manages to finally crack Yahaba’s code, decapitating him with a new lateral water wheel that contains Yahaba’s own arrows. Of course, as Susamaru quickly grew her arms back and Yushirou grew his head back, Tanjirou’s victory could be short-lived.

These demons are beyond anything he’s fought before; if they fall to a relative novice demon slayer they’re going to seem like pushovers. That’s why I’m glad the battle doesn’t end here. I’m sure there will be more twists and turns before the night is one. Maybe he only needs to hold out until sunrise? But however things shake out, this episode was a showcase for the series’ trademark heart-pumping, inventive, balls-to-the-wall combat animation.

There’s a fair bit of CG, but it’s used well: smoothly integrated so it doesn’t distract from the fighting in the least. It’s truly a delight to watch Tanjirou and Nezuko dance through the air dodging balls and arrows, while Yushirou’s head re-growth is wonderfully gross. I’m not sure how Susamaru’s tube top stays on when her extra arms punch through the sides…but that’s nitpicking.