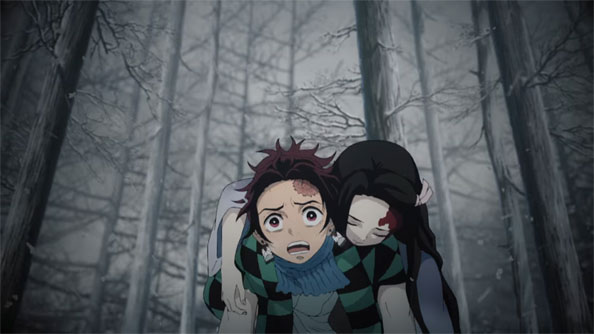 When the immensely popular and critically acclaimed ufotable series Demon Slayer aired between April and September of 2019…I missed out. Being highly susceptible to FOMO, when it first appeared on my Netflix home screen, I decided to dive in, buoyed by going back and catching up on the currently airing Jujutsu Kaisen.

With the first episode in the bag, I can confidently say that this is right up my alley, and I really should have cracked it open back in Spring 19. In my defence, back then I was busy watching the excellent Dororo reboot, Part 2 of Attack on Titan’s third season, and the second cour of the promising Rising of the Shield Hero, so I wasn’t just twiddling my thumbs.

That said, I’m glad I went back to check this out. While the number of characters and storylines are sure to balloon before long, I loved how simple it starts out: a boy carrying a wounded girl through a bleak wintry forest. I can’t stress that “bleak” part enough—once Kamado Tanjirou returns home to find his entire family slaughtered but one sister, I couldn’t help feel like we were entering Grave of the Fireflies territory.

I won’t spoil Grave for those who haven’t seen it; suffice it to say it’s by far the darkest and bleakest Ghibli film and one of the saddest films ever, and things don’t end well for its pair of siblings. Demon Slayer differs in that while Tanjirou and Nezuko suffer horrendous tragedy, the opening episode ends with a spark of hope that breaks through the unyielding cold.

Granted, that hope is a spark and only a spark, made possible by a titular demon slayer named Tomioka Giyuu staying his hand when it comes time to execute Nezuko. Did I mention demon blood got into her wounds, thus transforming her into a demon? Well, that’s the sitch, because it wasn’t enough that Tenjirou lose his mother and other siblings.

Tomioka admits he shares part of the blame for Tenjirou’s plight; if he’d arrived a few hours earlier he could have stopped the demons before they attacked. But he didn’t get where he is today by dwelling on the past. What keeps him from killing Nezuko is that despite most likely starving for human flesh, rather than eat her knocked-out brother, she shields him from Tomioka. Instead he places some kind of pacifier in her mouth that seems to calm her (and give her a very cute surprised expression).

So the story so far is simple and familiar: kid loses almost everything, and seeks to find and kill (or…slay) the demons responsible, and save his sister. Naturally, he’ll need to become stronger to do that, and Tomioka tells him to head to Mt. Sagiri to find a man named Urokodaki Sakonji.

ufotable, renowned for its action sequences, wows with the landscapes first, but is no slouch when it comes to the showdown with Tomioka and the Kamado siblings. The action is beautiful and precise, but not overly flashy or show-offy. Tomioka is so quick it’s as if he can teleport. Tenjirou is a lot more clumsy in his movements, as befits his desperate mood, while the demonic Nezuko is both beast-like and balletic in her strikes, leaps and lunges.

All in all, Demon Slayer is off to a stirring, enticing start, front-loading the tragedy but also presenting its hero with a chance to claw back from the brink and salvage what remains of his shattered life. I’m glad Tenjirou isn’t left all alone, and while Nezuko is a demon, and that sucks, there seems to be enough of her left that she’s not an immediate threat to him. As their quest begins, so does my quest to cover it. Better a bit late than never, eh?

Throughout elementary and middle school, Miyamura exuded a gloomy aura and was always the last to be picked for partners or groups, because everyone thought he was “weird”. Yet it doesn’t seem like he stayed away from others because he wanted to be. He pierced his ears in an apparent act of coping, or possibly controlling a part of his life when so much seemed outside his control.

Miyamura learned of Hori Kyouko’s existence the same day she learned of his; the two were assigned together due to their seating positions. Yuki mentions his gloominess to Hori, but once she actually meets and talks to him, she smiles declares him perfectly normal. Now, in their current state, Miyamura is a Part of the Group, with Yuki, Tooru, and Hori all pushing their desks into his without him having to move.

They’re all relieved they’re back in the same class for the new term, and Miyamura and Tooru end up going to the roof to apparently “affirm their friendship”. Tooru repeats the same descriptor of many past classmates, when he calls Miyamura “weird”, but the key difference is that he adds “but that’s okay.” Weird isn’t bad. It’s going to be okay, Miyamura thinks. He just wishes he could’ve told his younger, lonelier self.

Hori ends up at the cafeteria earlier than expected, and ends up sitting with Remi. Remi has noticed that Miyamura is “pretty hot” and asks Hori if he’s her boyfriend. When she says no, Remi asks if she can have him. When Hori doesn’t strongly object, Remi says fine, then “he’s mine”. That’s when Hori gets legitimately upset, envisioning Remi and Miyamura laughing together. She revises her position, telling Remi in no uncertain terms that Miyamura is hers and she’ll never let her have him.

With Souta now in grade school, Miyamura and Hori see less of him, which means they’re spending more time alone together. Part of that time is spent watching cheesy horror movies that Hori clearly likes getting Miyamura flustered about. But they also just hang out, talking about anything, letting their conversations peter out and not getting hung up on the lack of stuff to say.

Miyamura notices Hori’s index finger is double-jointed, something Tooru mentioned when he and Hori were comparing hands. But while Miyamura warned Tooru that he’d better not grasp her hand if he wants to live, here she gently weaves her fingers into Miyamura’s larger ones without hesitation, and quietly says “I love you”, before revising it to say she loves his hands. He tells her the feelings mutual, and as they sit there, their hands intertwined, he quietly says he loves her too.

They both heard each other. No one else needs to hear or know. Their love is right there and plain to see. It’s all over their faces, and they just fit together so perfectly and effortlessly. But school, as Miyamura once declared, remains “hard.” It’s hard because Tooru overhears Remi talking to Sakura about how Hori blew up on her for joking about taking Miyamura. 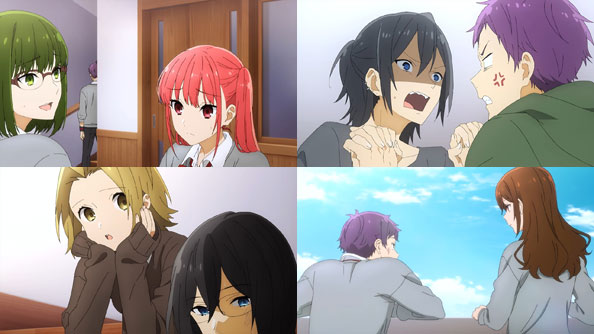 The next day, Miyamura arrives at class with a bruised cheek from a fight. Then Tooru arrives in even worse shape; I love how he’s no match for Miyamura in a scuffle, despite him asserting Miyamura was “prettier than most girls” with his hair up. Yuki pairs off with Miyamura while Hori talks to Tooru.

It started last night when Tooru told Miyamura that Hori was in love with him. When Miyamura denies this, insisting they’re still just friends, Tooru asks him what he’d say if it were Hori himself telling her…which of course we the audience just witnessed during their movie night. Their spirited verbal sparring turns physical, and Miyamura utterly squashes Tooru.

When both Tooru and Miyamura take the blame for beating each other up, Hori is perplexed, but Yuki less-so, because Miyamura told her straight up that they were fighting about Hori, but told her not to tell Hori.

If this all sounds like some drama is starting to stir, you’re not wrong. But it’s the kind of realistic drama that tends to crop up in close friend circles at school. Tooru may not be 100% opposed to Miyamura being with Hori, but it’s more Miyamura’s equivocation about their status that stokes his frustration.

Miyamura is called “weird” many times this week, with both derision with affection. In high school, a girl and guy hanging out and occasionally muttering I love you to one another and sitting in quiet bliss together and yet not outright “dating” might count as being “weird”…but it’s also okay!