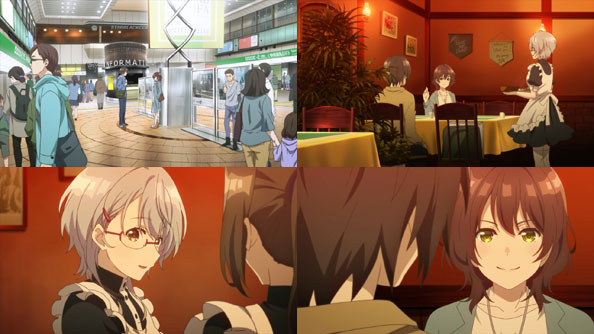 While a plethora of new characters were introduced last week, this episode keeps things simple by narrowing down the ones with whom Fumiya interacts to three: Aoi, Fuuka, and Yuzu. That not only keeps things from getting too scattered but is in keeping with Aoi’s desire to figure out who is best worth Fumiya’s time and effort.

Of course, first thing’s first: making him sufficiently presentable to converse with people. That means a trip to the mall for some new threads, a new haircut, and some lunch conversation practice. Fumiya has learned from the tapes that he has a tendency to mutter; Aoi tells him to use fewer words and rely more on gestures and tone to convey his emotions.

Quite by surprise, Fuuka is a waitress at the restaurant where they have lunch. Refreshingly, Fuuka doesn’t seem necessarily threatened by seeing them together, nor does she assume they’re on a date—she simply hadn’t pegged them as being friends material. Based on little details she noticed during their encounter, Aoi is convinced that Fuuka should be the “first heroine” Fumiya should pursue in his “playthrough.” 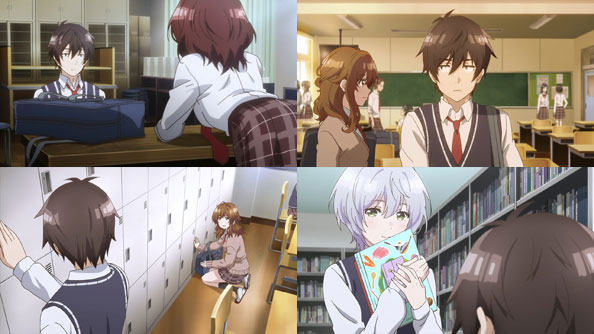 At their next meeting, Fumiya proudly reports that one of his small goals was achieved: his sister noticed he was putting more effort into his appearance. While Fumiya feels like he’s relying on “cheats” like dressing like the store mannquin or getting his hair done, Aoi insists that because he’s trusting in her and doing as she says, he deserves at least some of the credit for his success.

That said, Aoi isn’t going to start going easy on him. His next goal is to go somewhere alone with a girl who isn’t her. His related task for the week is to talk to Izumi Yuzu at least twice a day. Why Yuzu and not Fuuka? Because, as Aoi points out, real life isn’t a dating sim. Raising “affection levels” of one girl can raise them for all, along with increasing their innate possessiveness.

Fumiya is still weary that he’s not being “sincere”, but Aoi tells him it’s too early in his progress to worry about that. He’ll cross that bridge when he’s in a more serious relationship. For now, he needs “ins”, however he can get them. Things don’t go too smoothly with Yuzu at first; topics he chooses tend to lead to awkward conversational dead ends. But he keeps at it, and his quota for the week is eventually filled.

While in the library pretending to read a random book while coming up with TackFam strategies, Fumiya is approached by Fuuka, who notices the author he’s pretending to read is her favorite. Fumiya doesn’t correct her, and Fuuka ends up confessing something she’s never told anyone: she’s working on a novel, and would love it if he (and only he) read it sometime. 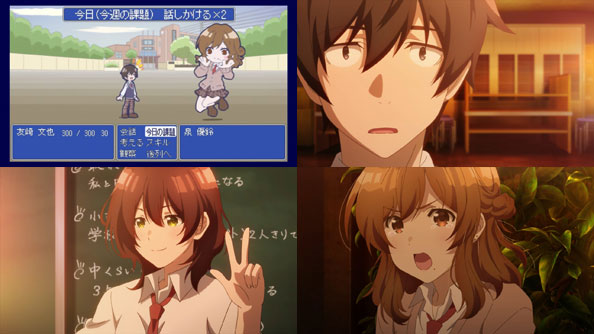 It’s a lovely little exchange because it’s the first of its kind fo Fuuka as well as Fumiya. Kayano Ai really sells Fuuka’s warmth and quiet enthusiasm, and Fuuka really does seem like a suitable person for Fumiya to pursue, and he has the perfect “in”.

As Aoi reiterates, it’s still too early to worry about “sincerity”; she can tell he’ll use it as an excuse to run away if she lets him. While he filled his quota in talking to Yuzu twice a day for a week, he may feel like he failed, like a battle he loses that results in KO and Game Over.

But unlike games of that kind, in the game of life you gain as much if not more XP by losing than by winning, so you’re better off keeping up the fight than starting over from scratch. That assertion really speaks to the gamer in Fumiya. The losses he tallied against Yuzu weren’t in vain; they got him to at least Level 3, and he can use what he learned from those failures to succeed with Fuuka.

But then life throws him for a loop when he spots Yuzu sitting alone and looking somewhat down. Remembering Aoi’s advice for him to mention something about her clothes or face, Fumiya tactlessly tells Yuzu she looks “gloomy”, but she doesn’t storm off. In fact, she just keeps looking gloomy, and even gets to the point that tears are welling in her eyes when she comes right out and asks him to teach her how to play TackFam.

I don’t believe this is the same kind of “in” as Fuuka’s secret novel reading—it’s possible Yuzu wants to learn to play so she can play with another boy she’s interested in, or maybe she just wants to learn TackFam, period. But the fact Fumiya reached out to her so much in the last week made him a viable person for Yuzu approach with such a request. So it could be an overture for a friendship. We shall see! 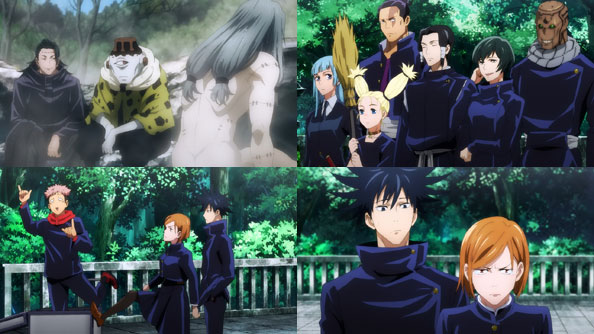 As Jougo and Mahito plan to attack Jujutsu High to secure Yuuji, the Kyoto team arrives in Tokyo for the Exchange Event. Aoi, Mai and Miwa Kasumi we’ve already met, but they are joined by the haughty Kamo Noritoshi, the witch-like Nishimiya Momo, and the robot-like Ultimate Mechamaru, who seems to be Kyoto’s version of Panda: a character who simply will not be explained further.

Between all the introductions (we also meet their head teacher Iori Utahime) and Gojou handing out souvenirs, and the start of the competition, Yuuji’s return is kind of lost in the shuffle. Sure, he pops out of a box, but the looks on Megumi and Nobara’s face are less elation and more…mortification?

While I’m sure they’re glad he’s back, Megumi doesn’t show it, while Nobara expresses her joy through anger. All I’ll say is fantastic to see the three finally reunited. It’s even treated as a meta gag that they were apart way too long, though I guess it’s only been about two months total. 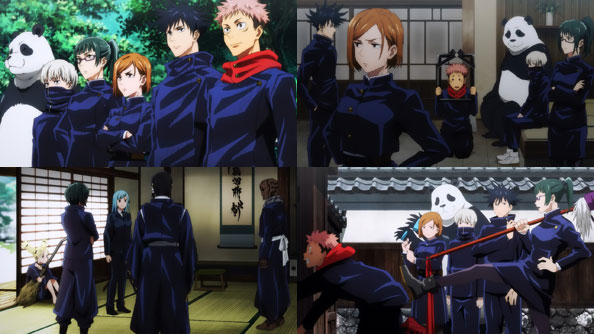 With the Tokyo team now at six members to match Kyoto’s, the two teams are informed of the first group battle, involving the exorcism of a second-grade cursed spirit released in a designated area, supplemented by various third- and lower-grade curses. Whoever exorcises the second-grade, or failing that, exorcises the most total curses wins. There are no other rules, so you can bet it will be a free-for-all.

Kyoto’s Principal Gakuganji is not happy Yuuji is still alive, and immediately orders his students to kill him at the first opportunity. Some, like Kamo, are eager to kill him anyway as he deems it unacceptable for someone of such low breeding to be a Jujutsu Tech student. Others, like Miwa, don’t like the idea of having to kill a fellow student. And then there’s Toudou, who just wants to watch his tall idol on TV.

Still, most if not all of them will presumably follow their principal’s orders and go after Yuuji. Since Yuuji remains hesitant to harm fellow humans, this will be a test of how all-out he’ll go. Perhaps, as Nanami has said, “moderate effort will suffice” here, but considering Aoi’s power alone, I really doubt it.

At any rate, if all of Kyoto is focused on Yuuji, that gives the other Tokyo kids ample room to breathe. Using him as a decoy could be the key to victory. Sadly, I won’t be able to find out for a couple days, since now I’m all caught up!