Nino insists Fuutarou take a shower to thoroughly wash off the river, but mostly wanted someone to talk to and break the monotony of her solitary hotel life…plus she felt bad that he looked so depressed! She gets Fuutarou to tell the full story of his encounter with Kyoto Mystery Girl…which lasted far longer than I had originally thought!

Sleep-deprived or not, there’s virtually no way “Rena” was a hallucination, yet remains an baffling enigma. She asks him to tell her about the students he’s tutoring as if she’s not one of them, but then why does she not only look just like one of them, but blushes when he describes them one by one with perfect accuracy? 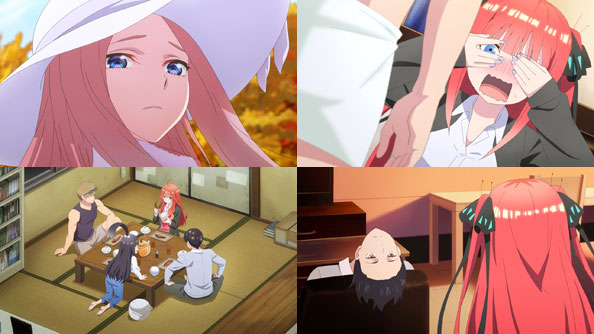 Rena tells Fuutarou he seems like someone who is “needed” now, and takes her leave, returning his student ID but keeping the photo of them, because, as she says, “they’ll never meet again.” She tosses him a rolled fortune and tells him to open it when he’s learned to “accept” himself. When he tries to follow her, he falls out of the boat and into the river.

The story moves Nino to tears, and she assures him “at least one person on this planet” would fall for an “insensitive guy” like him. Right on cue, she notices he’s wearing nothing but a tiny towel and is scandalized…yet can’t help peer through her fingers! Fuu learns she taped his study packet back together and has been working on it.

She apologizes to Fuu for her behavior, but won’t go home and make up with Itsuki, who had never slapped her before. Itsuki, meanwhile, has become way too comfortable at the Uesugi residence for Fuu’s taste. The next day, Fuu shows up at Nino’s hotel again, and she tells him about how she feels like her four sisters flew away from their nest, leaving only her behind—it’s why she keeps her hair the same length it was five years ago. 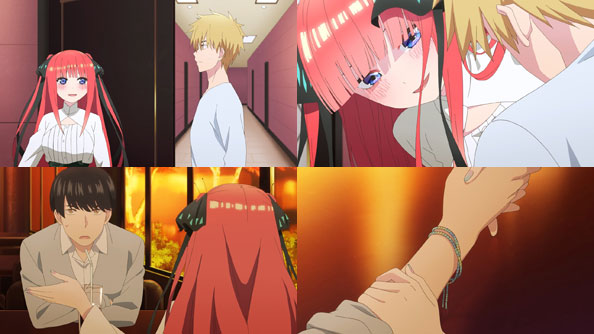 Fuu tells Nino that you can’t change how people change, but have to accept that change and whatever it brings. One part of Nino’s past she isn’t ready to forget is her brief time with Fuu’s cousin “Kintarou,” so she changes gears by having Fuu arrange for them to meet again.

A classic sitcom scenario then plays out, with Fuu having to spend the day with Nino as Kintarou and answering her phone calls for advice about his “cousin”. He slips up more than once, calling Nino by her first name, letting slip he knows she’s a good cook, then finally telling her he doesn’t care about their exams, but just wants the five of them back together.

Nino doesn’t ever let on that she knows Kintarou is Fuu in disguise until he’s ready to confess. She claims to Fuu at the first-floor café that she thinks Kintarou was about to ask her out. She then holds out her hand to give him a handshake of gratitude, only to pull up his sleeve to reveal the bracelet she just returned to Kintarou.

Whether Nino thinks the previous Kintarou she met was the real one, or she knew Fuu was Kintarou all along isn’t 100% clear, but what is clear as day is her expression of hurt and disappointment, which is the last thing Fuu sees before succumbing to the drug she slipped in his iced coffee. While it was played for laughs when she drugged him in the first season, it hits different here, especially after the heart-to-hearts they’ve had since then. 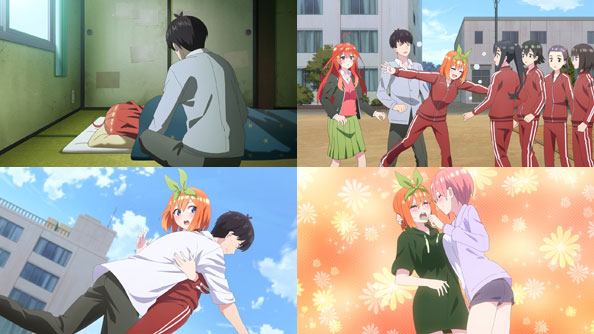 It’s an abrupt end to the Nino storyline, as she ends up checking out of the hotel, leaving Fuu in the lurch. I do wish he had had the chance to make clear there never was any Kintarou and properly ask for forgiveness, but Nino seems to have made her own ruling on the matter, and so we move on to the other sisters.

After forcing Itsuki to wake up on time (she forgets where she is and thinks Nino is trying waking her), the two of them try to get a bead on Yotsuba’s situation with the track team. Her coach doesn’t care about exams, and is willing to use Yotsuba as long as she lets herself be used…which is always.

Fuu has to resort to running with Yotsuba while quizzing her, ultimately resulting in him tripping over his own feat and into Yotsuba’s caring arms. She uses that as an excuse to get him to stop running. Then we learn Ichika also wants to help her little sister, even going so far as to brush her teeth like she used to do when they were little.

Ichika makes it clear that as the eldest, she wants to be there for Yotsuba and the others, and furthermore, tells Yotsuba it’s okay to quit if she wants. Yotsuba seems to want to quit, but doesn’t think she can, because it would mean causing trouble for the team.

Little does Yotsuba know that Ichika has been on the phone with Fuu and Itsuki throughout their conversation. She tells them she’ll be meeting with the track coach tomorrow. Hopefully the three of them working together can help “free” Yotsuba from a prison of obligation.

As for Miku, she arrives at Nino’s new hotel, having worn Nino’s spare butterfly ribbons to pass as her sister. Fuu had his change to try to bring Nino back into the fold and only got her angry by pretending to be someone he wasn’t. Now it’s time for Miku to have a go!

Rena (Unranked): The show wants me to think she’s a sixth and separate person, but I still don’t know what to think. I was intrigued by the fact Nino is the only quint to retain her original hair length from five years ago. Could Rena be Nino in disguise, getting back at Fuu for his Kintarou deception? To be continued…

One thought on “The Quintessential Quintuplets – 15 – Leaving the Nest”