When Syalis smashes the equivalent of a phone when the “Human Shopping Channel” won’t ship a waterbed to the Demon Castle, she starts a quest to build her own. At the same time, Twilight and the Big Ten have a quest of their own: Ignore the princess so she’ll start feeling and acting like a hostage.

Naturally, this backfires. Not only does Syalis successfully collect all of the materials and tools she needs, but those items are sourced directly from the Big Ten. While they are all silent towards her, when she ties leashes to them and drags them around, they dare not resist lest they accidentally harm her.

This results in the unprecedented scene of her pulling the King, Cleric, and Siberian like she’s walking her pets. When Alraune tries to restore order, Syalis yawns and they misinterpret her tears to mean their ignoring her has harmed her emotionally, so they give up and help her build her waterbed. 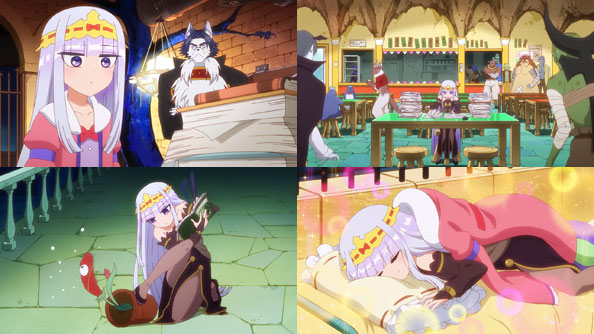 The next Big Ten Demon Quest comes from a suggestion from Hades to put the princess to work. Syalis herself takes on the quest to complete all the work she is given in a single day, as she was raised to understand that she can’t sleep until her work is done!

Oddly enough, her work takes the form of summer vacation homework, with math problems, a diary in which she writes entries for every minute (instead of day), and arts and crafts. She performs all of this work in her “work clothes”, a fetching shoulderless black dress.

Once she’s done an entire month’s work in a day, the Top Ten concludes that continuing to give her that amount of work is unrealistic, and could in fact cause more harm than good. Meanwhile, Syalis plops on her bed without changing and falls asleep using her usual pink robes as a blanket, her quest complete.

0-for-2 so far, the Demons make it a trifecta with a third quest: Teach the princess how to be a proper hostage by showing her other hostages in the form of recently-captured human bandits. Syalis takes one look at the conditions of these prisoners and assumes the demons are planning to eat them.

When she’s told to react to the demons as the other hostages do—with intense fear and loathing—she does just that, with Minase Inori completely changing the usual way Syalis speaks to sound more like the classic damsel-in-distress. The demons hate this, and all of the verbal barbs she tosses their way hit their marks and leave them a defeated pile in the dungeon.

The other humans, having witnessed what the princess did to the demons, are now more afraid of her than the demons. Syalis takes the demons’ reactions to mean she should go back to acting the way she has all along, with no regard whatsoever to her hostage status. That said, she still puts on the hostage act…but only when it’s convenient to her.

Finally, while lying in bed before falling asleep, she wonders to a teddy demon that if everyone in the castle has been so kind to her thus far, why can’t humans and demons get along? Could her stay there be the impetus for her taking steps towards a peace treaty once released? Will her first order to the Hero be to stand down? 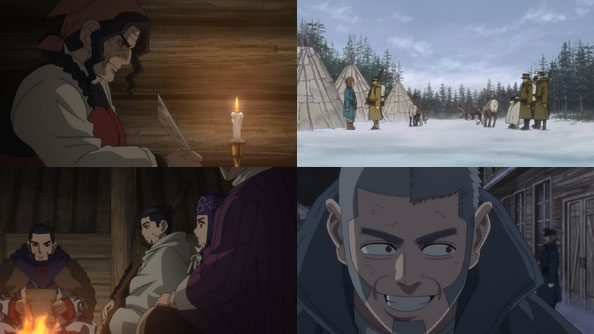 As Kiroranke and Sofia exchange correspondence, smuggled in and out of the prison with a little help from master of disguise Shiraishi, Asirpa, Kiroranke, Shiraishi, and Ogata stay in a village of the Nivkh, Karafuto’s most populous ethnic minority. Kiroranke maintains that Sofia could have crucial information about Wilk and the code for the gold.

Because he claims the gold will benefit all minorities including the Ainu, Asirpa is willing to go along with his plans. We also learn that Sugimoto’s team has reached the reindeer farmers who previously hosted Asirpa’s team. They’re still a ways behind, but Sugimoto is looking forward to reuniting with her at Ako Prison.

That’s pretty much all for present-day events, as Kiroranke spends much of the rest of the episode telling a story about—among other things—how he, Wilk, and Sofia learned Japanese from a man named Hasegawa Kouichi, who ran a photography studio in Vladivostok. Kouichi has a happy life with his wife Fina and infant daughter Olga.

Before the three revolutionaries arrive at his doorstep wanting to learn Japanese, Kouichi spots a lone wolf on the outskirts of town—an ill omen, if you will. Still, Kouichi welcomes the three and they learn quickly, with Wilk learning the quickest while Sofia seems least motivated to learn. Sofia is also immediately smitten with little Olga. Kouichi even likens the three to the Three Great Nobles of the Restoration who successfully modernized Japan. 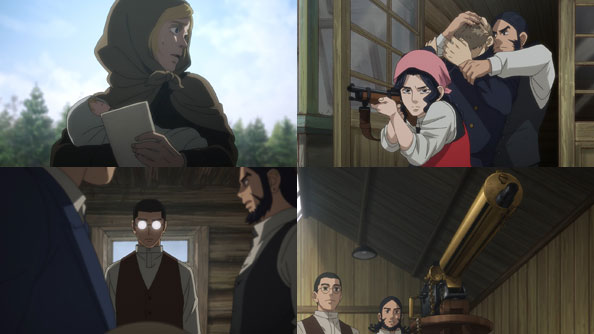 It isn’t long until Kouichi learns that his three visitors from the far west were responsible for assassinating the emperor. Assuming the Russian secret police will descend upon his studio soon, he tells Fina to take Olga and go far away to await word from him, insisting she not return under any circumstances.

As it turns out, the police aren’t there for the revolutionaries; they’re there for Kouichi, a Japanese spy using the studio as a front. Sofia, Wilk, and Kiroranke break out the guns and do their thing; none of the police can be allowed to escape. Kouichi makes things a little easier in the ensuing siege by revealing he keeps a machine gun hidden amongst his photography equipment. 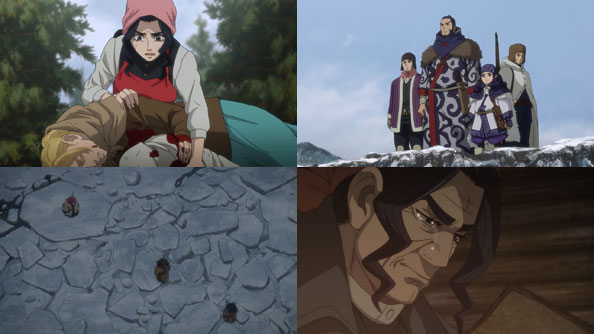 As the three take out the police, Sofia fires a shot into a tree, and I half-expected it to be that lone wolf Kouichi spotted earlier, which he encountered a second time while Wilk was teaching him about traps. Instead, it’s Fina, who did come back for Kouichi. A bullet hit both her and Olga, killing the child and leaving the mother in bad shape.

Sofia is beside herself with grief and regret, but there’s little time for either; she and her compatriots must flee before attracting more attention. When they reach the seasonal ice floes that allow passage from Russia to Karafuto—the same ones Kiroranke will use in the present to help Sofia & the other inmates reach their allies on the mainland—Sofia declares she won’t be going with Wilk, whom she loves, or Kiroranke, deciding to stay in Russia to stoke the fires of revolution.

We then return to Kouichi holding his dying wife, and the moment he tells her the truth: his real name is Tsurumi Tokushirou. That’s right, that Tsurumi, with the busted skull. It truly is a small world. Now we know the connection between him and the revolutionaries, and it’s another horribly tragic story, this time centered on one of the series’ main players.

Lt. Tsurumi seemed to accept his wife and daughter’s death as an accident, but he’s quite a different man since his head injury. This added history will color all future interactions (if any) between Tsurumi, Kiroranke, and Sofia. Kiroranke also writes to Sofia that Wilk has died, and though the woman has become hard-as-steel in the years since she last saw him, she still can’t help but weep from the news.