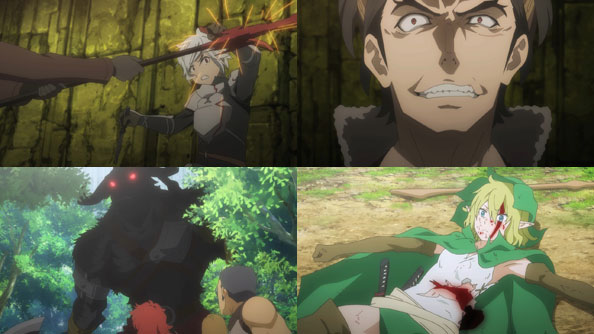 I respect Bell’s moxie, but I was hoping for something a bit more clever than trying to go toe-to-toe in a melee fight against an opponent two full levels higher than him. Sure, Dix is in a weakened state due to the curse, but that won’t last. At least we get some clarity via his ranting: he’s been able to calm his raging Daedalus blood—and nullify the urge to keep building Knossos—by killing Xenos.

It’s the specific fact they cry and scream like humans that makes it work. So yeah, Dix has been suffering a horrible curse for which not even the bloodshed in the dungeon could lift his entire life. It’s not surprising he’d take whatever form of release that came along; moral implications be damned. But still, he’s one sadistic bastard!

Meanwhile, outside Knossos, the Ganesha Familia have almost finished capturing the Xenos when they are ambushed by a giant minotaur. Everyone is either killed or injured, including Aisha and Asfi. Ryuu manages not to die by dumb luck, as the minotaur hears a wolf howling and departs before finishing her. So much for Bell getting some help from these three!

He’s on his own when Dix shows him the chained Wiene, then rips the stone off her head. Wiene undergoes a horrifying (and no doubt excruciating) transformation into a full adult vouivre, screaming and lashing out mindlessly.

Bell attempts to reach the Wiene he knows by refusing to fight her and letting her grab his shoulder (after swatting him back a couple times). She remembers the first time she accidentally cut him, and actually manages to say his name and weep tears of despair. But it doesn’t last long, and soon Wiene is back to going berserk.

Dix is super pissed that Bell almost succeeded in proving him wrong about Xenos just being monsters by any other name, and they continue their one-on-one battle, but despite being pretty beaten down (both physically and emotionally) he seems to find his second wind, even breaking the blade of Dix’s spear. Then Lyd breaks free of Dix’s curse and fights beside Bell, allowing him to land his Bell Punch square in Dix’s chest. 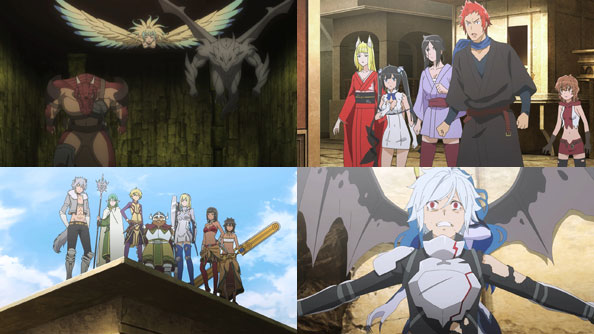 Unfortunately, regardless of Dix’s status, the damage is done, and he opens a door to allow the berserk Wiene direct access to the surface, where she’s sure to be “dealt with” by adventurers. Bell races after her, stopping only to be healed by Fels’ kick-ass magic. Gros joins Lyd and Rei in going after Bell to help him, even if he can’t admit he can probably trust the Little Rookie at this point.

Wiene emerges first on Daedalus Street, which just happens to be where Welf led Hestia Familia on a hunch. She was immediately vilified by citizens on the surface when she was a cute little kid; I can’t imagine her new form will do her any favors.

Bell follows shortly thereafter, but Wiene is stabbed by a spear thrown by Loki Familia, who are perched on a roof, ready to swoop down and eliminate the threat. Bell then does something that could condemn him, his goddess, and his Familia forever: he shields Wiene from the Lokis, a half-defiant, half-mad look on his face.

This pits him against Ais and every other member of the Lokis who have just been ordered to dispose of the vouivre. It’s an extremely volatile situation where there just isn’t time to explain what needs to be explained, and even if there was, orders are orders. One just hopes Bell won’t have to fight his friend, and cooler heads in Lyd, Rei, and Gros can arrive in time to restrain Wiene and bail Bell out. But I gotta say, things are not looking good for Argonaut-kun!