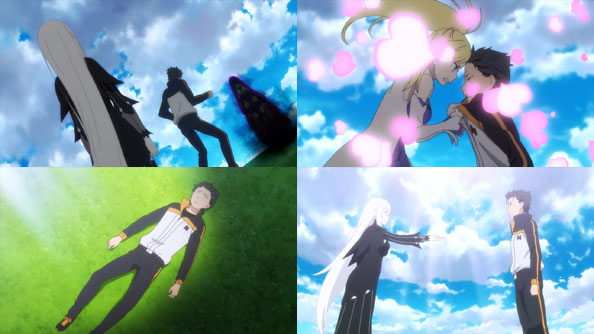 Just as Subaru is dealing with Echidna’s apparent heel turn, along with the antics of all the other whimsical witches, Satella shuffles back into his presence, forever enrobed in black miasma, loving him and wanting him to love her. But for the first time, Satty has more to say about love, specifically begging him to love himself more.

Subie isn’t about to be lectured by a bunch of witches. The way he does things and saves those he loves is his business, and if he has to keep suffering and dying, so be it, as long as he doesn’t lose anyone else like he lost Ram. He’s had so much of his fill of these witches he decides to peace out by biting his tongue and bleeding out. 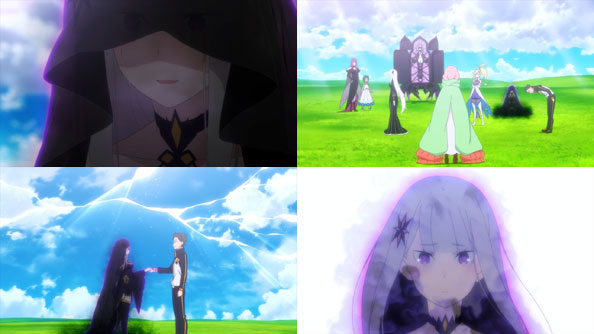 But when it comes down to it, he doesn’t want to die, or even be hurt. Minerva can sense this, and so heals him with a headbutt. The witches share the sentiment that Subaru is someone worth keeping alive and watching, and so he acknowledges that each one of them has helped him in some form or another.

Heck, if not for Satella, he wouldn’t have Return by Death, his only means thus far of doing anything in this world. Yet when Echidna holds out her hand for Subaru to take, promising him she’ll take him to whatever future he desires, he rejects it. If he’s going to find his value to others beyond his continued death, he feels he must look for it himself.

Before parting, he does take the hand of the most unexpected witch: Satella’s, promising he’ll endeavor to love himself a little more, and also that one day he’ll honor her wish to return and “kill” her. 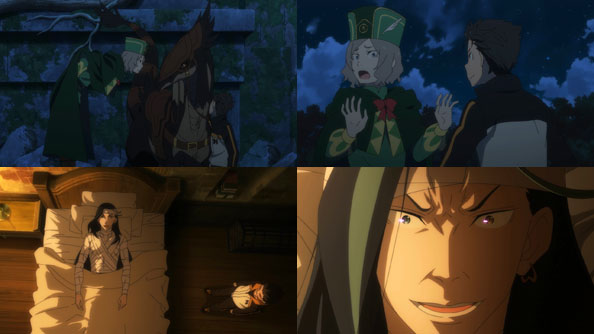 Of c0urse, even if Subie is proceeding without direct witch assistance, he’s still going to need allies. He awakens outside for once; Otto tells him Patrasche entered the graveyard to retrieve him. When Subaru asks why, Otto mocks his denseness; clearly, it’s because Patrache loves him and cares about him. And despite his tsundere reaction, Otto clearly feels the same way.

But while Subaru has loving friends in Otto and Patrache, he’ll find no such affection from Roswaal, beyond his role as the margrave’s avatar of hope. He insists on Subaru following his recommendations to put Emilia first and everyone else second; Roswall sees Subie as a tool to save only one and no one else. Doing everything for Emilia’s sake, to him, means ignoring everything she wants.

That said, Roswaal believes Subie has yet to find his resolve, and indeed is only barely on the starting line on the road to that resolve. So he forces the issue, copping to having ordered the assassins at the mansion. By creating a situation where even someone with Return by Death can only be in one place at one time, he’s forcing Subie to make a choice: Emilia, or the others. 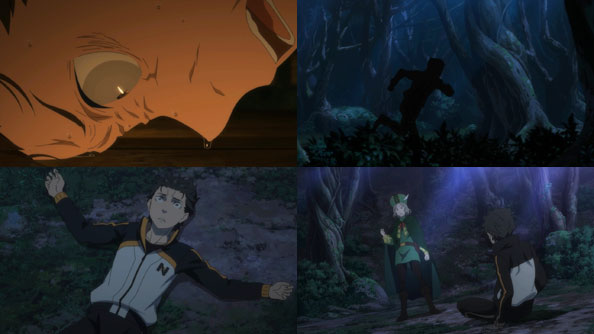 And I thought Echidna was bad! She’s only true to her nature as a witch of greed; Roswaal is, and fully admits to being, completely insane, and has been so ever since he first saw the witch’s eyes. But to him, insanity is a requisite, not a liability, to achieving his goals, and he wants Subie to be just like him.

Subaru runs out, determined not to be anything like him, but the shock of learning he’s been set up in this way by Roswaal for just that purpose sends him into another uncontrollable fit of despair, running through the forest until he trips and takes a tumble, then repeating over and over what he should do, and coming up blank.

When in such a state, there’s nothing for it but for someone to pull him out, and Otto happily takes up that mantle by punching Subaru in the face. Subtle it ain’t, but it was what Subie needed, when it was needed. Otto scolds him for continuing to put up a brave face right up until he’s on the edge of madness-by-despair.

Hopefully Subaru has gotten the hint that yes, doggone it, people like him, and with our without the witches’ help or Roswaal’s hindrance, they’ll find out what to do together. Unfortunately, we won’t find out what until part two in January 2021, when hopefully things will be looking up a bit in our own world!