When Hero Kanon was murdered, he used Evansmana’s power of breaking destiny to prevent Anos from becoming the Demon King of Tyranny, and taking his place as Avos. Now he wants Anos to kill him, believing his sacrifice will break the chain of hatred that is the Asc spell. Now that Ray/Kanon’s affection for humans has taken a more specific form in Misa, he can no longer wait for “someday” to arrive and bring peace; it has to happen here and now. 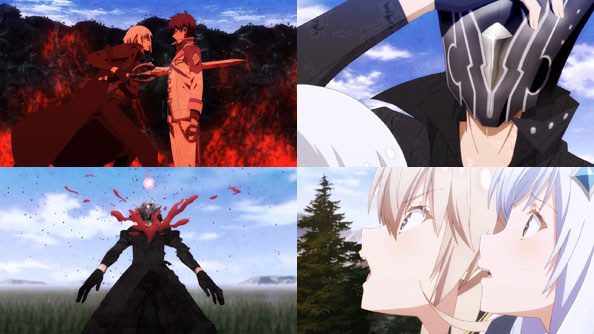 Anos initially seems willing to play along, pulling out all his OP magic tricks to destroy all but one of Kanon’s sources. But then, at the last minute, Anos lets Kanon stab him through his own source. As the boundaries of their battlefield drop, he slips Avos’ helmet on his head, making it appear to everyone assembled that Ray has defeated the Demon King.

Anos hoped this would extinguish the humans’ hatred, but the Asc is still going strong within Diego, who musters his ten thousand Zeshia troops and orders them to extinguish all demons. Eleanor enters the fray to try to halt their advance, while Commander Jerga himself appears in monumental scale to finish the job.

Ray/Kanon tries to attack the giant Jerga with Evansmana, but his holy sword has no effect on the “true sacred magic”. Enter Misha and Sasha, who know their King will resurrect, and in the meantime will do what they can to protect their demon brethren. 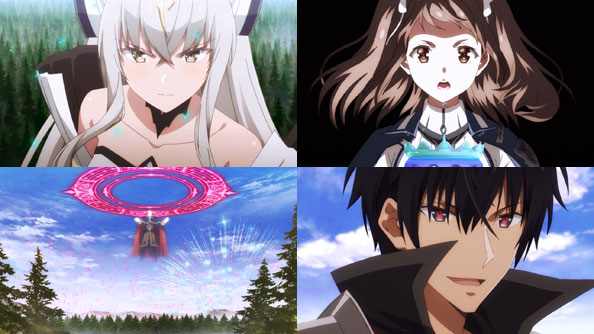 To that end, they use their Necron family magic Dino Jixes to merge into a single entity that fights alongside Ray/Kanon while Eleonore and Misa attempt to hold back the Zeshia army. It’s ultimately all about buying time and hoping the Demon King returns.

Just when Jerga seems ready to unleash a holy magic spell to exterminate all demons, it is negated by a giant black and red magical circle, and all the hundreds of Zeshias fall to the ground, stunned. Anos makes his re-appearance, having used Ray/Kanon’s killing blow to repair his source via source magic. 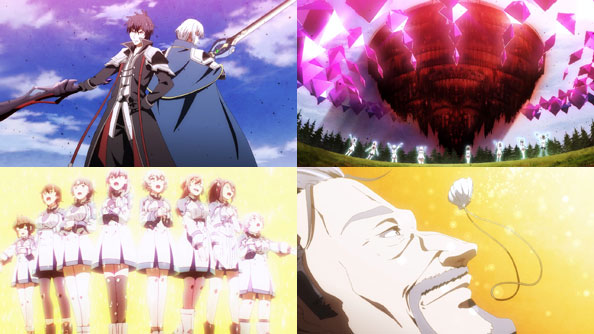 In this final stage of the battle, Anos and Ray/Kanon fight side-by-side, while the Demon army commander helps Eleonore and the Human forces. When Jerga tries to use Asc, Anos counters with an Asc of his own, fueled by the Fan Union’s latest song. He even summons Delsgade!

Soon, even Jerga’s hatred is transformed into love as he sees the shell necklace he gave his beloved wife. The present era of peace asserts itself and the united forces of Humans and Demons fight together to eliminate a solitary man’s two thousand-year-old grudge.

At this point we’re running out of episode, so Misha and Sasha split back into two girls in order to welcome Anos back to the world of the living, while Ray returns to Misa and embraces her with love. As the credits roll, the whole, the Anos & Co. return home, where his parents meet his “third wife” Eleanore (whom he converted into his magic so she’d no longer be misused) and learn of her ten thousand “children”.

That final scene really brings is back to one of the more unique aspects of the series, which was that the main antihero always had a loving home and family to go home to and enjoy some piping hot mushroom gratin. It’s welcome and necessary follow-up to an disorienting kitchen-sink final battle that in the end was only slightly more over the top than previous climactic battles.

While I maintain that things got overstuffed towards the end and that 5-6 additional episodes would have been ideal, Demon King Academy was nonetheless a fun new take on the OP Asshole MC, tempering extremely arcane magical jargon with a surprising amount of heart.

It’s still winter, but that doesn’t stop Sakura & Co. from donning their swimsuits and hitting up the new state-of-the-art indoor water park. It’s an episode heavy on character count and slice-of-life and light on…well, everything else! But that’s okay; sometimes it’s nice to just kick back and relax at the pool (though I’ll admit to being envious; pools in my city were closed all summer due to you-know-what!).

Like Tomoyo, Syaoran is smitten with Sakura’s swimsuit, but things have gotten to the point where all he can do is stare at her. Naturally, Touya and Yukito have part-time jobs at the park’s restaurant, but this time Nakuru joins them, lending her another opportunity to glom onto Touya, who is otherwise still concerned about Yukito’s tendency to, uh, fade out of existence now and then.

Even Kero-chan manages to smuggle himself into the park in Sakura’s bag and steals her cream soda when she’s not looking, only to get harshly scolded (Sakura even bears a fang, a rare occurrence unless she’s protesting her brother’s teasing). Otherwise everything’s peachy until Eriol summons a  massive wave that threatens to drown Rika (who is still learning to swim from Sakura), among others.

Sakura can’t very well summon her wand and cards out in the open, so she has a clever solution: do it while she’s in a water slide! She conjures and converts Watery to a Sakura Card, who proceeds to make it rain inside the park, which has the effect of lowering the water level, thus rescuing Rika.

In another private corner of the park Nakuru straight up asks Eriol why he insists on “doing cumbersome things” like this; he tells her she’ll find out soon enough. I certainly hope so!