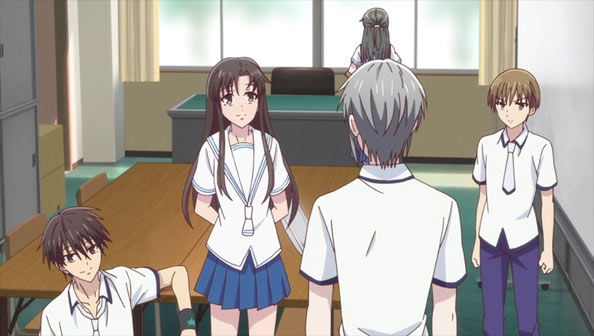 It’s a new cour, and a new term for Tooru, Yuki, and Kyou, and while Arisa and Saki make a quick appearance at the beginning (confirming that Arisa has had no further contact with Kureno), this episode is not about the main crew at all. It’s all about Yuki, and his ability to lead the Student Council, which as was hinted at far earlier in the season is packed with some colorful personalities.

First there’s VP Maname Kakeru, who sleeps often, calls the council the “School Defense Force” and does little work. There’s secretary Todou Miki, who looks like Tooru’s twin sister, sounds like cutesy Kagura, but is a first-class stirrer of shit. The high-strung, irritable Sakuragi Naohito and the taciturn treasurer Kuragi Machi round out the crew. 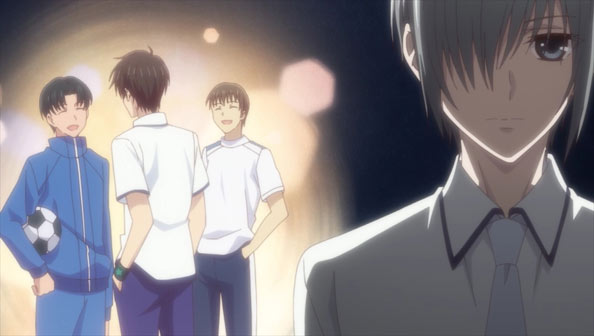 Wrangling these misfits would be a tall task for any president, let alone one who was tortured by a god-child cult leader for years into thinking he’s lower than scum and devoid of hope. Yuki may be committed to a new, more honest and take-charge self, but he still has trouble interacting with people who aren’t family. Heck, he still has trouble with family!

Not only that, Vice President Manabe has a bright, charismatic personality and people are naturally drawn to him, which not only reminds Yuki of his big brother, but also social butterfly Kyou, two people “inner Yuki” has always compared himself to, and found himself wanting. He’s just not sure what to do around a guy like Kakeru, so he withdraws within himself. 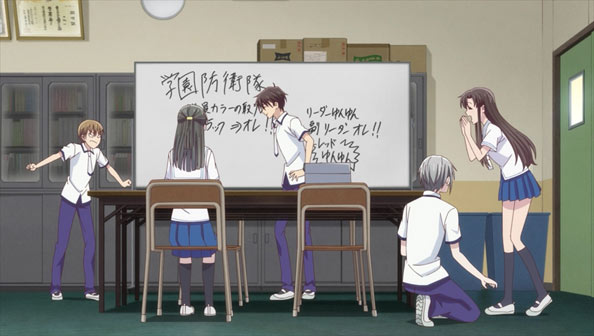 When a StuCo session is commandeered by Manabe for the sole purpose of assigning Power Ranger-like colors to each member, Naohito fume, Machi simmers, and Miki eggs everyone on, and Yuki has no idea how to maintain order. The chaos washes around him, even as Manabe names him “Red” simply because he’s the leader, taking the more aloof “Black” for himself. No doubt Yuki sees it the other way. 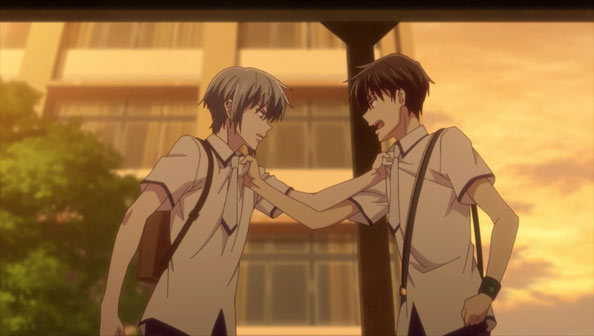 Things come to a head when, while Yuki carrying seedlings for the gardening club after school, Kakeru confronts him about the nature of his relationship with Tooru. He spotted Kyou walking home with her and judges the guy to look more like Tooru’s boyfriend, and “happier” looking in general. That sets Yuki off, and he unleashes a tirade at Kakeru condeming his apparent hobby of weighing the happiness of others for his own amusement.

Surprisingly, Kakeru kicks the tray of seedlings out of Yuki’s hands. Not one to back down from a confrontation, he calls Yuki out for lecturing him so brazenly. The two bicker, and Yuki eventually admits he was really just lecturing himself, because comparing himself to others is what he always does…or rather did, and wants to stop doing so much. 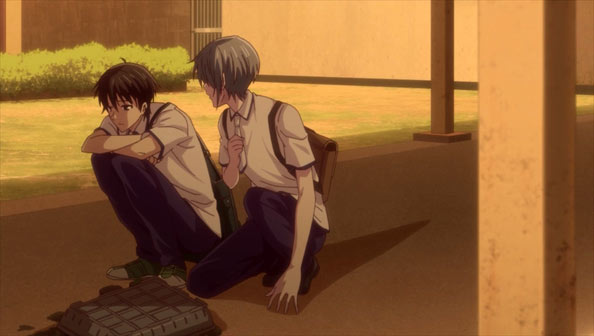 The StuCo may be full of troublemakers, but Yuki considers himself the biggest of all. Kakeru’s stance softens significantly, and he admits that he’s actually jealous of Yuki for having more empathy and understanding the feelings of others before needlessly hurting them.

Having only just started spending time with Kakeru, it was easy to box him into a caricature, but Yuki learns there’s more to the guy, including a desire to grow and change—even if he naps a bit too much to actually do so! While he was initially weary of the StuCo and his ability to lead, now he looks forward to spending time with Kakeru and the rest of these weirdos.

While I’ve honestly missed Tooru and the rest of the crew these past two weeks, Fruits Basket once again demonstrates it can tell a solid story from anyone’s perspective, and with any combination of main, secondary, and tertiary characters, without breaking a sweat.