As a result of all his help at the fireworks festival, Fuutarou is well-liked enough by Ichika that she walks to school with him, something any lad in his right mind would die for! But as good terms as he’s on with the eldest quint, the youngest continues to harbor a deep animosity for him.

Itsuki still holds a grudge for him refusing to help her study back when they met. She and Nino remain outside the study circle, and his attempts to convince them to join it are rejected with prejudice. That said, Fuutarou was way too loose with his words to Nino in front of her friends, making it sound like the two of them slept together!

Fuutarou remains committed to studying, so he declines to join Ichika, Miku and Yotsuba for parfaits, but Itsuki flags him down on the way home and puts him on the phone with their father, who informs Fuutarou in no uncertain terms that he expects results for his investment: if any of his daughters fails the upcoming midterms, he’ll be fired.

It’s a gut punch for Fuutarou, who doesn’t immediately react well to the warning, as he takes out his anxiety on Itsuki, who is convinced he’s only doing this for the money and doesn’t want his half-assed help after rejecting her. The two end things in a bad place, declaring they’ll never work with one another ever.

When Fuutarou comes to the quints’ place so he work with Ichika, Miku, and Yotsuba, Itsuki is nowhere to be found, but Nino is around, so he can’t let the others know the cost of failure lest Nino exploit that information to sabotage him. Nino gets the info anyway when she pretends to be Itsuki while Fuutarou is in the bath. I guess her goodwill toward him didn’t last past the fireworks festival, huh?

Meanwhile, Ichika has picked up on Miku’s feelings for Fuutarou, and makes every effort to put the two in closer contact with one another, from insisting Fuutarou spend the night (hence the bath) to plain ol’ shoving Miku into Fuutarou’s chest, then having Yotsuba check his pulse…which is high, but to be fair Yotsuba chased him around the house!

When Miku comes right out and asks him what type of girl he likes, Fuutarou only doles out his three top qualities in a girl after the three each complete a page of notes. Ichika invites Fuutarou onto the balcony for a break, and brings up his fight with Itsuki. She sees Itsuki and Fuutarou as “too alike” for their own good, but thinks it’s fine for friends to fight, but as friends, not sworn enemies.

She also knows both of them are stubborn and its holding up their reconciling. She’ll do what she can for him, but at the end of the day it’s up to him to make things right with her. Fuutarou is impressed with how much of an “oldest sister” Ichika is, and follows her advice to praise her by patting her head, causing her to blush profusely. 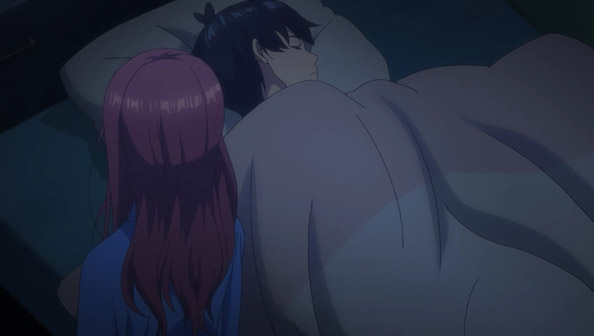 Still, Ichika is being the good big sister by deferring to Miku’s feelings regarding Fuutarou…at least for now. When it’s time for bed, Miku bunks with Ichika and volunteers her bed for him, only to drowsily return to her bed out of habit after going to the bathroom. Fuutarou wakes up to find Miku curled up beside him!

Whatever consequences result from this innocent mix-up will pale in comparison to what happens if any of the sisters fails the midterms. This isn’t just about Fuutarou losing his job and the money his family needs. He’ll suddenly be cut off from the five young women who are gradually helping him grow as a person, just as he’s helping them. So I hope, for all their sakes, he finds a way to help them all pass.