Someone keeps giving Hime expensive backpacks every year, despite the fact her dad already bought her one. Because she’s a kind and gentle soul, Hime tries to wear both at once, inspiring Kakushi. But to him, giving a kid a backpack is a privilege that must be earned and appreciated, not an obligation to be fulfilled.

We eventually learn that the mysterious serial backpack provider is Kakushi’s father-in-law, who judging from the Toyota Century is some kind of big shot. Kakushi still seems to hold a grudge for the man’s reluctance to allow his daughter to marry a gag manga. But now that Kakushi has been a father for ten years, he would feel the same way if Hime brought someone like him home. As Kakushi says, he’s “a freakin’ paradox.”

One of the extra tasks Kakushi took on to realize his Kind World was an autograph session, which is booked the same time as his day-date with Hime at the very popular and sought-after Kidzanira, where kids get to try out a bunch of adult jobs in a controlled environment. Fortunately, the bookstore where he’ll be signing autographs and the Kidzanira are in the same mall. But that also means a risk of Hime finding out his job, so his assistants take turns keeping an eye on her.

During the morning session Kakushi is convinced everyone in line is either someone he knows (Ichiko), a friend of someone he knows, or people paid by his editor to stand in line. The way he phrases his questions to the latter group furthers his misinterpretation of events. It’s not until after spotting a poster for a famous painter that he realizes that those in the line are there because they are legitimate fans who love and respect his work. Even a father and young son are united in their love of Balls of Fury. 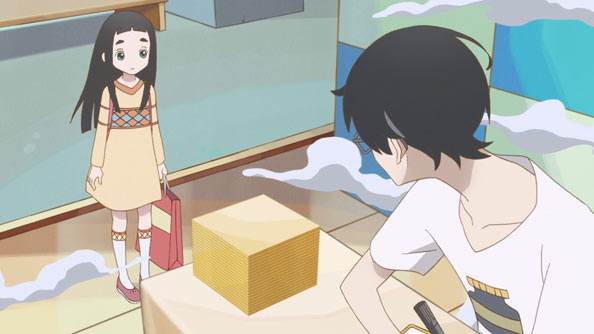 Just as his confidence returns and he yells “I’m a manga artist, damnit!”, his exuberance accidentally knocks down a partition, revealing Hime in a cloud of smoke. For a moment it looks like the gig’s up, but Ichiko swoops in with a tremendously creative save, telling Hime she and Kakushi are at the “Kidzanira for adults” trying out different jobs. Even so, Hime doesn’t even recognize her dad in his manga uniform, so he didn’t have to worry. What he may have to worry about? Hime wanting to work in a bookstore! 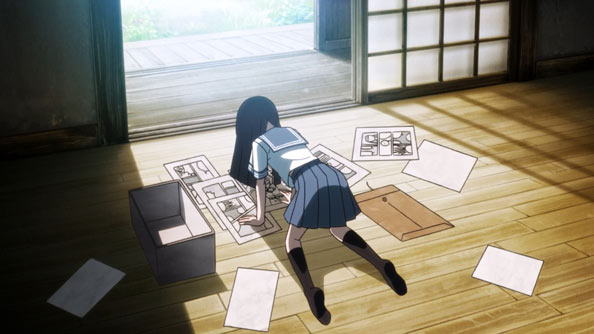 Fast forward to the future, where the older Hime opens the “17” box to reveal envelopes full of manuscripts. At first she seems unmoved by the manga, which is about a father, mother, and daughter. It’s all so boring and ordinary…which is why as she continues to read the tears start welling up. There may not be swords or magic on those pages, but there is a bunch of real life; a life very familiar to Hime.

This closing scene is one more emotional “bomb” that had been intricately constructed in the “past” sequences that preceded it. All those mundane moments of her and Kakushi just living life together given gain deeper resonance in the future where he’s suddenly absent.

Despite Kakushi’s reservations—not to mention his father-in-laws about him—Hime may well fall for someone like him. Not because that person will be a gag mangaka, but because they’ll be kind and loving, and consider loving and caring for her to be an honor and a privilege…because that’s exactly what it is.

One thought on “Kakushigoto – 06 – Pride and Privilege”