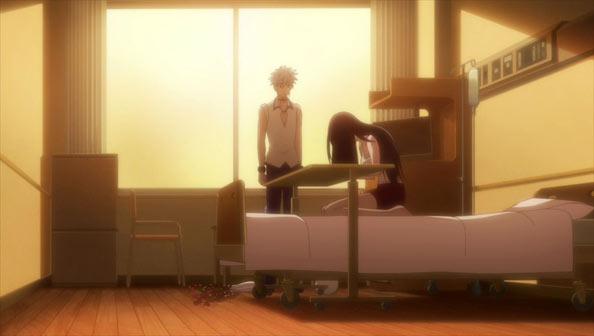 We’re dropped right in the middle of some drama involving Haru and the heretofore never seen Horse of the Zodiac, Souma Rin. Specifically, Haru is sprucing up her hospital room with some fresh roses, but Rin wants him to buzz off, because she’s tired of him. 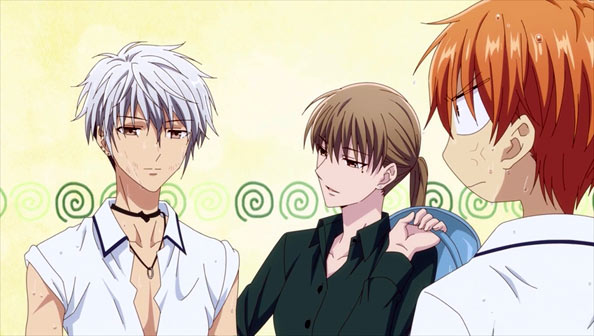 The next day at school, Dark Haru causes a rampage in his classroom. Yuki and Kyou are lucky enough to get to him before he hurts anyone, but the Haru they encounter knows just what buttons to press to anger both of them. Yuki keeps his cool, but when Haru goes for Tooru, Kyou slugs him, and then the teacher douses them both with cold water. Haru reverts to cool Haru, but must wait for his parents to arrive and discuss his punishment with faculty.

It’s a fine mess he’s in, but Haru thanks Kyou for holding him at bay, and Yuki later pays him a visit to see what’s eating him. Yuki may preface their talk by saying he only thinks of himself (unlike people like Tooru), but the fact he came because he was worried about Haru proves that’s not true! By the same token, if Haru only thought of others, he’d never turn Dark, as he did when Rin dumped him.

Haru ends up being suspended (not “suspected” as Momiji puts it) by the school, and while walking home, learns Tooru is worried about Haru. Yuki is too, and decides now is as good a time as ever to exit another comfort zone and pay Haru a visit, even if it means returning to the Souma Estate, source of so much childhood trauma. He’s physically dwarfed by the gates and walls and even suffers a brief panic attack, but steps through them all the same—not just for Haru, but for himself.

Yuki walks past his nagging mom and makes a beeline for Haru’s, but finds that Haru isn’t in any particular need of cheering up. His version of “reflecting and repenting” is goofing off in his room, playing video games, snacking, and reading magazines. Still, Haru is both shocked and grateful that Yuki actually came to see him, knowing full well how hard it must’ve been.

Haru resolves not to give up on Rin, despite her harsh words. Yuki also spotted Rin entering the estate before him. He doesn’t run into her on his way out, but she sees him, and the look on her face suggests she isn’t the most pleased about him visiting Haru, or the estate, or something.

The personality traits of the Horse include being passionate, determined and uncompromising, beautiful and stylish, short-tempered and impulsive, given to starting and ending relationships quickly, eager to save face yet not eager to admit their mistakes. We haven’t seen much Rin yet, but so far all that tracks! I look forward to getting to know her.