Kouta and Kakuzawa’s assistant Arakawa find the professor’s body (and head) in the basement. Arakawa isn’t particularly devastated by the sight of her lover beheaded, but perhaps she’s in shock. Not to mention she has no idea why he has horns like a Diclonius. A shaken Kouta returns home, but in the middle of talking with Yuka a switch seemingly flips in his head. He suddenly can’t remember what he was saying, and goes to bed. 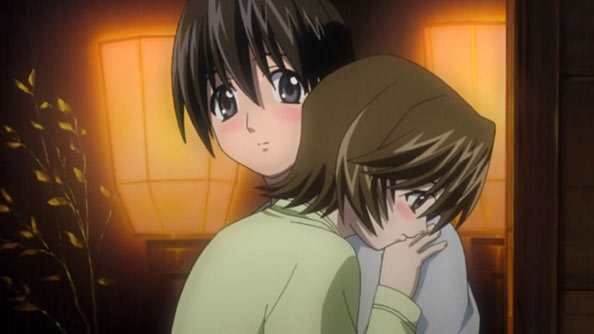 Out on the street and still lucid, Lucy reaches into the head of a passing girl, either wiping her memory of seeing her…or killing her. The next day, Yuka insists on accompanying Kouta as he continues his search. The two end up taking shelter at a shrine, revealing their feelings for each other, and kissing. In a show with so much violence and cruelty, a tender scene like this is welcome, and Noto Mamiko’s voice emanates kindness and gentleness.

While walking to school, Mayu spots Bando on the beach, and makes the terrible mistake of approaching him. Mayu can’t help it; she was worried about the guy and is glad to see he’s alright, because she’s a good girl. To repay his debt, Bando gives her his number for her to call if she needs help. Ironically, when he learns she knows about Lucy, Mayu has to use that call immediately…on him. His honor forces him to let her go, but his toxic masculinity put her in that situation in the first place. 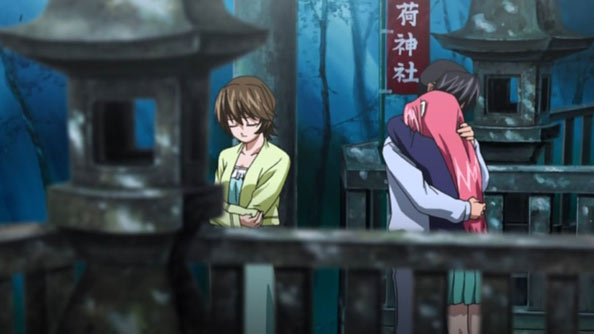 The rain stops, and Yuka’s lovey-dovey-ness turns to embarrassment, and then jealousy when she and Kouta encounter Lucy. They’re shocked to hear her form complete sentences, but when Kouta insists they return to his house, she tells him she doesn’t deserve his charity. She mentions something from the past that triggers a memory in Kouta’s head. Lucy herself remembers her and Kouta playing in the ocean as youths, before reverting to Nyu and cuddling with him.

I wonder if Kouta will continue to remember those repressed memories involving Lucy, and how he’ll respond to them. He’s thrown caution to the wind regarding “Nyu” to this point because he thought they had no prior connection. What if she killed his sister Kaede?

In the meantime, Kurama couldn’t kill Nana. We learn he’d already killed his birth daughter in the past (presumably for having horns) and lost his wife to suicide shortly thereafter. But if he wanted Nana to survive, you’d think he wouldn’t have left her on that god-forsaken beach, where Bando (who apparently lives there) can immediately find her. I’d have shipped her to the other side of the country, if not continent…