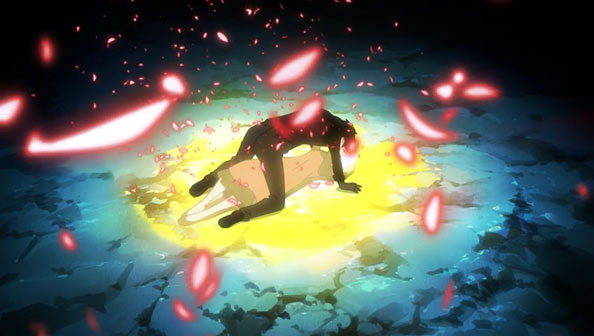 This is the story of Rachel, the girl who climbed the tower so she could see the stars, and Bam, the boy who needed nothing but her.

I like it—Succinct and concise. Efficient and elemental. Stark, yet beautiful. Before we’re tossed into the present, we get a brief look at the past: the last time Bam saw his beloved Rachel. Rachel is bound for the greater heights (literally) of the Tower, and Bam can’t go with her, so it’s farewell.

Rachel’s intolerance of the darkness of their world, and desire to see the stars at the top of the Tower, meant more than remaining with Bam. Meanwhile Bam can’t tolerate living in a world without Rachel; she’s his Eureka to his Renton. So when the opportunity to climb the Tower presents itself, he takes it. 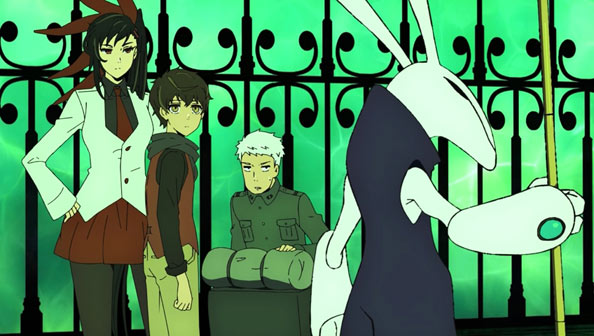 That means dealing with the Tower’s caretaker, Headon, who presents the first test: avoid a giant steel-clad eel and break a black sphere. Two other challengers appear in Princess Yuri (who gives off strong Tohsaka Rin vibes) and her attendant Evan. They lend him a “Pocket” that translates their speech and does other things.

Yuri isn’t impressed by the frail-looking Bam, but the point of the test isn’t to defeat the giant eel, but simply to stare death in the face and not flinch. Needing to be with Rachel more than he fears deah, Bam passes that first part of the test. And because he has a cute face, Yuri lends him an heirloom of her family, a sword called Black March. 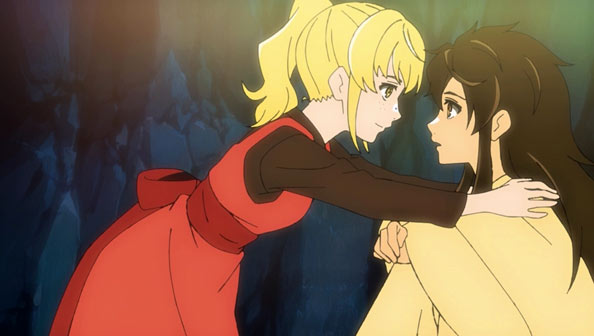 Bam lets the eel swallow him and then wounds it from within, but the black sphere proves too hard, even for Black March. That’s because Bam is trying to use his own strength without asking Black March to lend him hers. Yuri is again skeptical it will listen, but like her Black March likes his cute face.

The sword is also moved by Bam’s story of being saved by Rachel some time ago, when he was trying to break out of a dark place rather than cutting into one. Rachel told him about the stars in the sky. 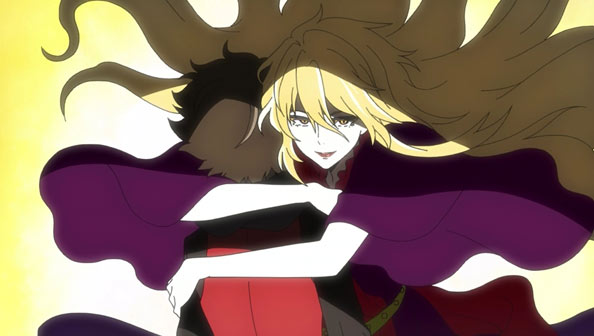 He comes to see her as one of those stars, which means to climb the Tower and reach the sky is to return to where she belongs. He, in turn, wants to return to her warm, celestial light. Black March stuns the eel and shatters the black sphere, and Bam is transported to the second level for the next test.

Yuri, initially surprised by Bam, now knows the score, and decides that she and Evan will follow. Because there’s something she loathes more than she fears death, and that’s boredom. Not a princess to live within the walls of the palace, she seeks adventure, excitement, and entertainment, which Bam looks primed to provide.

The second test takes the first—facing death and not withering—and adds a new challenge: summoning the will to take life, not just preserve one’s own. It’s a battle royale involving 400 “regulars” (Bam is non-regular) that quickly drops below 300. Bam realizes what he must do and prepares to do it, but ends up locked in a firing circle with three other combatants, including a blue-haired student and a lizardman-like hunter.

Tower of God is disciplined, refined, and concise in its themes and crystal clear, if relatively shallow, in the motivations of its characters. It balances the simplicity of those elements with solid, confident execution. I dug the Bones-style character design and the rough old-school line work, and of course, Kevin Penkin’s gripping, eclectic score; he’s a composer who instantly elevates any work he’s tied to. Hayami Saori soars as Rachel in a role perfect for her.

Tower of God, the first big-league anime from Lee Jong-hui (AKA SIU) and animated by the venerable Telecom studio, has apparently been hugely anticipated by fans of his webtoon (which has amassed 4.5 billion views worldwide). Speaking as a newbie, I can see why. Everything in this episode conspires to create a gravitas that’s hard to fake—an atmosphere of seriousness, significance, and auspiciousness that calls to mind shows like Steins;Gate and Attack on Titan, which have their own massive fan legions.

To quote the space rabbit Headon, “I’m interested in seeing what’s next.” 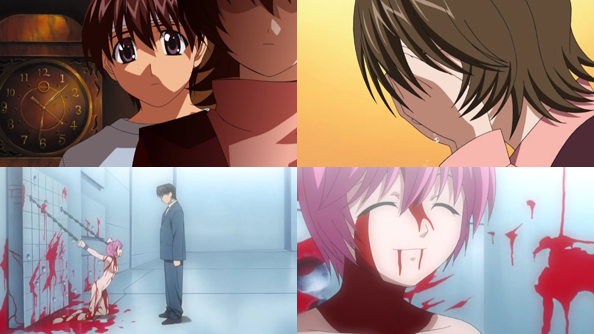 When Yuka walks in on Kouta undressing Nyu, a lot of things must run through her head. While it makes sense to get soaked clothes off someone before they catch cold, Nyu is also a beautiful woman, and one with serious mental differences. Yuka’s initial thoughts probably dwell on how bad it looks. But on a more basic level, Yuka doesn’t want Kouta doing anything with another woman, whether it’s harmless or not. As far as she’s concerned, Kouta belongs to her.

A lot of questions ran through my head during Chief Kurama’s encounter with Nana in her detention cell. Like “why is she naked?” or “why is she drenched in blood?”, or “how long has she been like this?”. The exact nature of her situation is kept pretty vague, but suffice it to say Nana has lived her whole life in the facility, enduring what amounts to unspeakable torture with a smile.

As such, Nana knows no other life, and no other comfort but Kurama as her “father”. So she’ll do anything for him…except kill. Instead, she’ll try to detain Lucy for him if she can. All she asks for in return is his necktie, which she uses to conceal her horns. 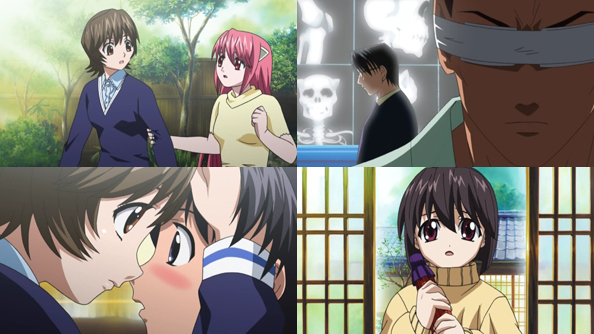 Yuka tries to stay away from the house where watching Kouta with Nyu causes her so much discomfort owing to her Deep Feelings for him (incidentally, the episode’s title). But when she drops off some of her clothes for Nyu, she finds Kouta has caught cold from his beach excursion, and Nyu is absolutely helpless to care for him.

Back at the lab, Kurama speaks to Bondo about undergoing castration…which is probably not what he should have started off with. He then describes who and what it was that Bondo lost so badly to, and the reason castrating him might save humanity: Lucy can “reproduce” through her vectors, causing the mutation in whomever she touches with him. In that way, she and her kind could one day overrun humanity as we know it.

Yuka decides that if Kouta won’t take Lucy to the authorities, then she’ll just move in to keep an eye on both of them. She puts Kouta to work cleaning up the house, and Nyu is eager to pitch in. That’s when Mayu, the runaway girl with the dog, shows up with Kouta’s umbrella. He has many questions about that night on the beach with Nyu and the soldier. 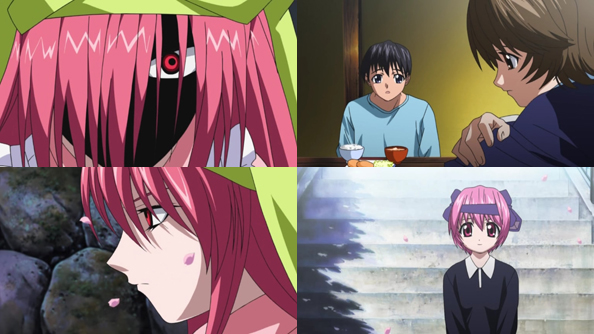 Nyu ends up slipping and falling, and whether due to the impact of the fall or the music box that plays the show’s theme song (or both…or neither), she reverts back to Lucy. She comes this close to killing Kouta with her Vectors before a flash of a younger Kouta stops them dead. Lucy runs outside, and for a moment the show makes us wonder if she killed Mayu’s cute puppy. It turns out she just set it free, but it soon runs back to Mayu.

As Yuka tries to talk to Kouta about whether he has any feelings at all for her (he seems to have lost a lot of the memories of the two of them that she cherishes), Lucy wanders off, eventually encountering Nana, whom she sensed was coming. Kurama’s underlings don’t think Nana is any match for Lucy, but Lucy’s problem is she never knows when she’s going to devolve back into Nyu…and Nyu isn’t a match for anyone.