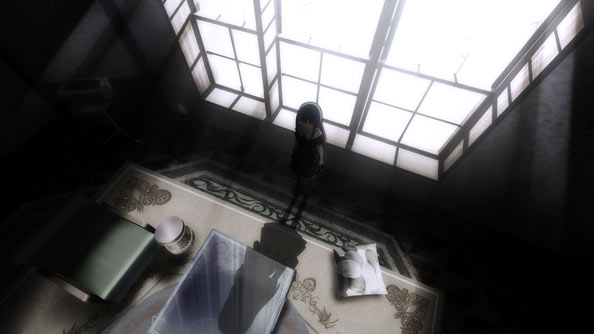 In the latest blow to Iroha’s eternally troubled investigation, Touka tells her that not only does she not remember any Tamaki Ui, but she never had any memories of her to begin with, because they never met. We and Iroha have no reason to trust Touka, but perhaps something even Touka isn’t aware of stole her memories of Ui, along with everyone else’s.

Meanwhile, at the Villa, ghosts of Yachiyo’s former roommates—and friends—ask if it’s really okay to let her new friends be. Yachiyo protests that Iroha & Co. are not friends—she’ll never make friends again—but as fellow magical girls, she still has a duty to protect them, so she heads to the museum.

Touka is the lecturer for a series of lessons, starting with the basics: When a magical girl’s soul gem shatters, the girl dies, even without any physical harm done to her. That’s because the gem is their soul, and a person cannot survive without it.

This is what happened to Yachiyo and Mifuyu’s former roommate and friend Kanae in a battle with a witch. She was the first casualty on Yachiyo’s road of misery and regret. Tsuruno, Momoko, and third magical girl Mel eventually moved into the villa, and life slowly returned to some kind of normalcy.

Tragedy struck again when the second way for a magical girl to meet her end happened to Mel: witchification. In a witch battle in which Mel protected Yachiyo, her soul gem became murky, turned into a grief seed, and Mel became a witch.

That was probably the beginning of the end of the Mikazuki Villa, and Yachiyo had to endure the unendurable: not only was a second good friend and comrade gone, but she had been transformed into their apparent “enemy.” Kyuubey tells the girls that this is just the way it is, and in the long run it’s good for humanity.

Touka rejects Kyuubey’s system, and preaches a third way: the Doppel. It already happened to Iroha on accident earlier, and she watches it happen to Mifuyu in another recorded memory: the soul gem is murky and she transforms into a witch, but only temporarily. She can return to being a magical girl essentially at will, in direct defiance of Kyuubey deemed a one-way-only road with no U-turns.

In light of all these revelations and clarifications, we can be happy this third way exists, because it mean Iroha could come back from witchification. But one wonders…what is the catch? Why is Yachiyo so opposed to the Wings of Magius? Is the ordinary order of human life now interrupted?

I don’t know, and with only one episode left, I hope there’s a second cour to explore this further. All I know is that Kaede has already gone to her side, which clearly troubles Rena. Will Yachiyo be able to make it in time to offer the other girls the case against conversion?