After fruitlessly prostrating themselves before the bathroom mirrors, Hanako and Kou seek help from Spider-sensei, who directs them to the boundary of the former Second Wonder, Yako, which still exists but is simply no longer under her authority. She leads them to a mirror within her realm (which looks a lot nicer), which leads to the boundary of the Third Wonder.

By the time they arrive, a lot has happened in the Hall of Mirrors. Nene has been put to sleep after trying to stop Tsukasa from forcing Mitsuba to eat the remains of the Third Wonder, which he claims is the only way to keep him from disappearing altogether. Hanako is surprised to see his brother in the boundary, but not as surprised as Kou is to see the friend he thought was gone.

As it turns out, Mitsuba may look, talk, and act very much like the “old” Mitsuba ghost, they’re not the same entity. New Mitsuba is the result of Tsukasa taking the soul, or “reason” he stole from old Mitsuba and placing it in an artificial spirit body constructed from myriad lesser spirits. This new version of Mitsuba becomes the new Third Wonder after eating his predecessor. He also doesn’t seem to remember Kou at all, which is disappointing. 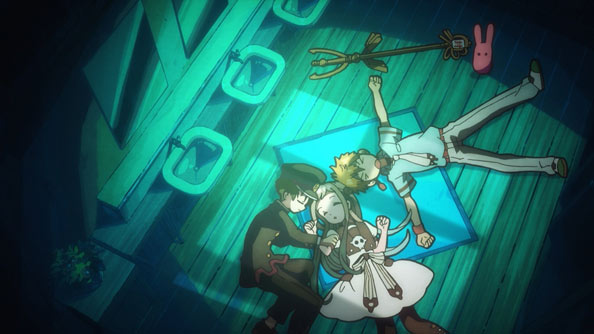 Interestingly, a big battle doesn’t ensue, which surely subverted my expectations. Instead, Mitsuba uses his newfound authority to send Hanako, Nene and Kou back to the living world via mirrors. He may not know Kou, but he knows Nene well enough now to not want harm to befall her, while Tsukasa made a point to be gentle with her earlier. I doubt Hanako can let Mitsuba the Third Wonder stand, but can Kou still find the Mitsuba he knew, or is he truly gone forever?

We know shit is about to hit the fan. So it’s somehow even crueler that after
showing us Aunt Rosa’s true colors last week, the episode keeps things light and pleasant. Rosa tells Golem about a shortcut to “avoid” trouble, Somali and Golem exchange bracelets, and the two have a snowball fight with the oni. Even the score is oblivious to the impending unpleasantness. 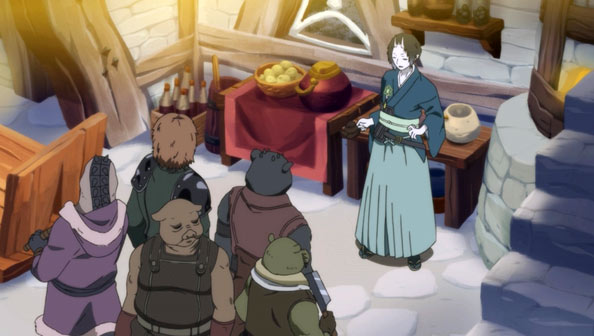 Then, later that night after Somali has gone to bed, Golem detects five human hunters. Yabashira is quickly told Somali is indeed a human (he’s fine with it, like any decent person), and acts as a decoy, allowing Golem, Somali and Shizuno to flee into the nearby subterranean tunnels. However, Golem and Shizuno were both fooled by the kindly Aunt Rosa, who meets them right before the supposed exit and leads them straight into a holding cell.

She tells them a personal story about how her village once coexisted with a human village, but the humans’ prejudice led to needless killing, and eventually all non-humans agreed it would be safer for everyone if the humans were persecuted and killed. She also sings the same song Kikila sang for Somali, revealing the lyrics are about cooking humans.

At this point, Golem’s body is nearing its end, as he had to exert considerable energy to evade the second set of hunters in the tunnels. He can’t risk destroying the cell gate, but when it’s opened and Somali is snatched away by the hunters, he has no choice. Only when he prepares to attack the hunters his whole left arm shatters (and his new bracelet snaps), while the rest of his body shuts down.

Shizuno’s pleas for understanding fall on deaf ears, and Somali is tied to a table as the hunters prepare to cut her into pieces—one wants the brain, while Rosa wants the liver. Still, Golem is down but not yet out: his eye turns read, he gets back to his feet, and he transforms into something wild and brutal we haven’t seen before as his core churns and smolders.

It may be the beginning of the end for Golem, but his attempts to insulate her from the cold truth of the world were not only futile, but are no longer possible. Now all that matters is defending her from harm with everything he has left—as any father of any species would do for their child.