All along, the Kura and Mizuhanome have been made possible by, essentially, the superpowers of a mutant: Asukai Kiki, who ensares anyone around her in her dreams. Once she’s released from her holding tank, there’s nothing keeping everyone in the Kura from falling into a coma and waking up in various dreams—a kind of ID:Invaded Greatest Hits scenario. 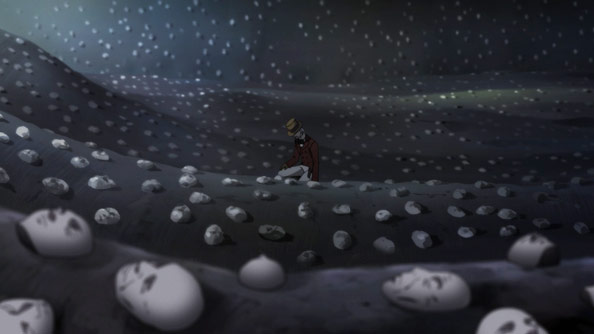 Such was the plan of Chief Hayaseura, AKA John Walker, AKA Brilliant Detective Unaido (whew). He has a “want and omelette, break some eggs” logic to this scheme, wherein many serial killers were caught and brought to justice at the cost of creating a few; but in the long run it will be a net plus for society. As for facing justice, the chief shoots himself several times while in a cockpit programmed to inject him into his own Id Well.

Narihisago and Hondoumachi manage to dive in after him in time, and find Hayaseura in a dream world full of masks, each of them an id well. He eludes them by putting on Hondoumachi’s (the drill world), and then tries to neutralize her by revealing her true name, causing a well storm.

As Kura employees are killed (and the Wellside team run from boulders), Brilliant Detectives like Sakaido, Hijirido and Unaido can teleport between the wells. Narihisago keeps up the chase and ends up in his own id well again, where he spots his wife and daughter and gives them a nod goodbye.

Fukuda, despite not being in Brilliant Detective mode, is still able to catch Hondoumachi in mid-air and free her from her well storm. Back in the field of masks, Fukuda is shot by a Inami Nahoshi, as payback for Hondoumachi killing Kazuta. As Hondoumachi gives a somber goodbye (or see-you-later) to Fukuda, Nahoshi travels to her id well, where the half-Kazuta is still there clinging to life, but she’s promptly stabbed to death by Hayaseura. 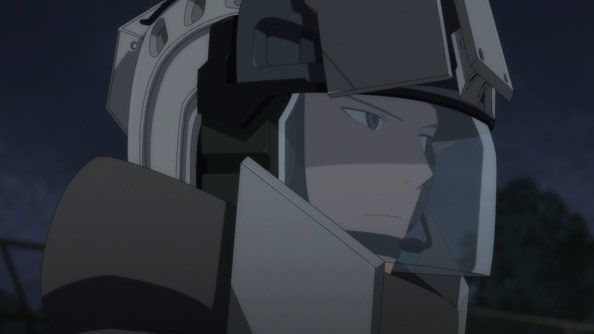 Narihisago returns to the mask world, reunited with Hondoumachi, and both of them agree to stop Walker and get everyone—including themselves out of this mess safe and sound. It’s good to see both of them with something to live for, not giving in to despair or Hayaseura’s cruel games. And it’s possible dying in the id wells doesn’t automatically mean death, as some of the nurses at Asukai’s hospital eventually woke up from their comas.

Out in the real, Momoki and Mitsuoka have a plan of their own. Momoki will don an isolation suit, walk into the compromised Kura, and neutralize Asukai, preferably by inserting her back in the Mizuhanome tank. If she refuses, Momoki is prepared to kill her, for there are too many other lives at stake to indulge her. The question is, even if he’s willing to kill her, will he be able?