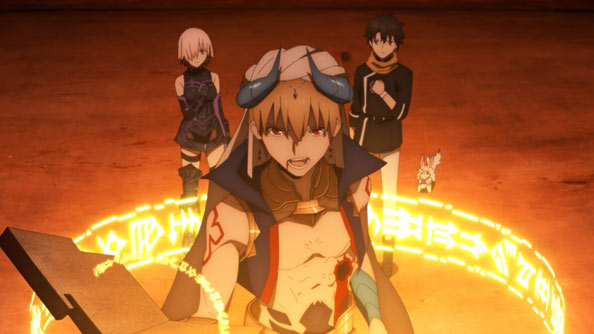 You can go ahead and call this the “Kitchen Sink” episode: everyone who didn’t fight in the previous few episodes fights this week, and I mean everyone. Gorgon basically covers Mash and Ritsuka’s retreat by butting heads with Tiamat. Still, that only slows her down a bit, so with Uruk about to be stamped out by the roving Tiamat, Gilgamesh goes on the offensive, managing to personally fire 360 cannons even with a huge hole in his chest. 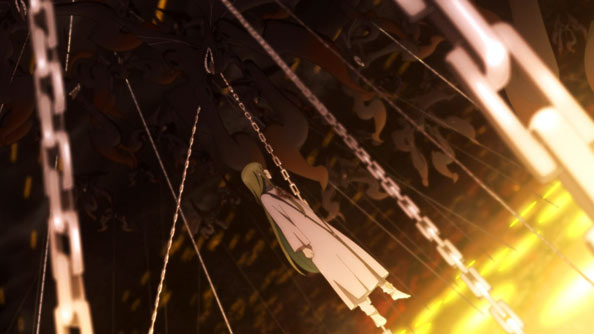 Kingu, who’d been telegraphed as a potential turncoat, realizes that potential in the 11th hour by detaining his mother with the Chain of Heaven, because it’s what he, Kingu, not Enkidu, wants to do. Uruk, once so sunny and grand, now looks more like Mordor, and it’s a hell of a setting for a kinda-sorta-final battle. For Gilgamesh, it is the final battle, full stop.

With Tiamat chained down and Ereshkigal’s preparations complete, all Ishtar needs to do is unleash her stored up magical energy, firing her Noble Phantasm Angalta Kigalse, blasting through the earth that separates Uruk from the Underworld and dropping Tiamat down into a domain where the rules are different: Ereshkigal rules, Tiamat is no longer invincible.

The plan seems to be going well, and Kigal certainly seems confident in her impending success, fueled as it is by warm praise from Ritsuka and Mash. However, things take a turn when Tiamat covers herself in her primordial mud, and her chaotic sea starts to infect the Underworld itself. More than anything, Ereshkigal is grossed out, but also shocked her authority can be overwritten in such a way. 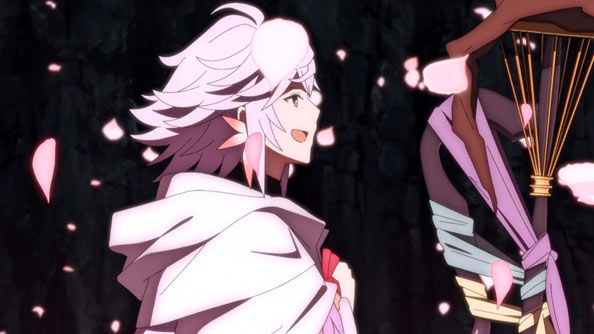 Fortunately, Merlin returns in his real form to turn all that mud into harmless flowers, but Tiamat is still hanging around, is still ridiculously huge and strong and has not only healed, but transformed into an immense dragon that Merlin somewhat unimaginatively calls Beast II, the culmination of evil borne by mankind’s folly throughout its history.

Tiamat is not getting any weaker, and will only remain mortal while in the Underworld, so she’s gotta be killed before she can escape by air (she regained her flying ability). And if you need someone important killed, who do you call? Why, an Assassin, that’s who. Specifically in the Fate world, you call the first Assassin, Hassan-i Sabbah.

FGO took a week off to sharpen up the animation, and it shows: this episode looks fantastic. It’s just…things are getting awfully ridiculous and BIG now, and Tiamat has now morphed into a comically overwrought CGI final boss. With just two episodes left, I’m hoping this Tiamat business can end sooner rather than later so we have some time for a proper epilogue.