Felicia is escorted by Black Feathers to a pair of higher-ranked White Feathers of the Wings of the Magius, Amane Tsukuyo and her twin sister Tsukasa. True believers in their organization, they are committed to the “salvation” of magical girls, though let’s be honest, that could mean anything!

Nevertheless, their goal of destroying all witches is very much enticing to the vengeful Felicia, as is the prospect of free room and board for an essentially homeless orphan. Kyouko also likes how all of the things she’d rather not worry about are taken care of, freeing her to do what she loves: defeat witches and collect grief seeds.

However, the longer they stay in the company of the Wings of the Magius, the worse and worse the deal looks. Yachiyo has a GPS fix on Felicia, so she, Iroha, and Tsuruno follow after her, prepared for anything. They are blocked by the Amane twins, who are polite and inviting, but also very clear that Felicia and Kyouko are now new members, while the other three are intruders.

With Kyouko already questioning why she’d have “no need” for Grief Seeds (I guess as long as she drinks the Owl Water her luck will keep her Gem clear?), Felicia suddenly feels betrayed when the Amane twins unleash a huge group of captive witches on Iroha, Yachiyo and Tsuruno. She doesn’t care if the Wings “control” them with magic or not; she hates witches! 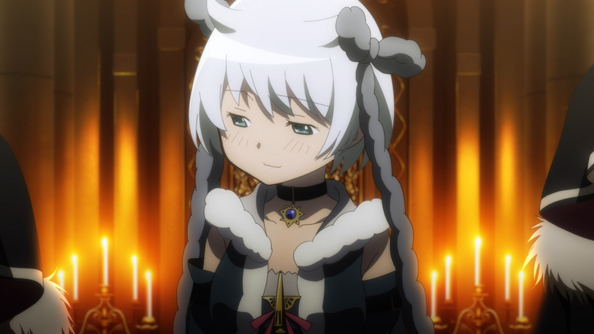 When the witches are mostly defeated, the Amane sisters’ gems become very murky, but they were apparently hoping for that, and undergo a transformation similar to what happened to Iroha, when a witch-like version of herself emerged from her gem and went berserk. This happens to the Amanes, and then it happens to Iroha, who manages to defeat the Uwasa’s core all by herself.

Turns out she’s not so weak after all…but controlling her “witchy side” won’t be easy. As for the Amanes, thy seem worried about how their boss will react to their failure, and that boss turns out to be Mifuyu, the real version, not the Seance Shrine echo. She claims to have been “left behind”, insinuating Yachiyo and the others had something to do with it, but Yachiyo has no intention of joining the Wings, so they part ways with the rift intact.

With the consequences for running out of luck now gone, Iroha offers Felicia a place to stay, even though she’s about to move herself. Yachiyo offers a room at her empty boarding house, and Iroha cooks everyone a nice meal; Felicia’s first. Then the last lucky happenstance occurs: the boarding house Iroha’s parents assigned to her is…Mikazuki Villa, Yachiyo’s house.

This episode ends with the magical girls learning a bit more about their Wings of Magius rivals and in a comfy, amicable new living situation that’s conducive to further cooperation and bonding. It’s a shame Mifuyu may be lost to the cult of Magius, but at least Felicia seems to be on firmer ground, now that she’s starting to understand that she is her own most important client for her “mercenary” work.