The Eizoken has 96 days to produce a 15-20 minute anime about a robot fighting a crabtle, and its members must contend with a nearly infinitely more complex production. More action scenes, more sound effects, more backgrounds, more of everything they already did with Machete Girl, only they’ll also need more classically epic music and voice actors for dialogue.

Kanamori Sayaka, the ever-steady executive producer, keeps the ship on course in these early stages, knowing when to crack the whip and when to show kindness and generosity…or at least that last bit would have been the case if she’d actually treated the artists to ramen. That said, never carrying more than 1,000 yen at all times is an elegant, effective means of budgeting! 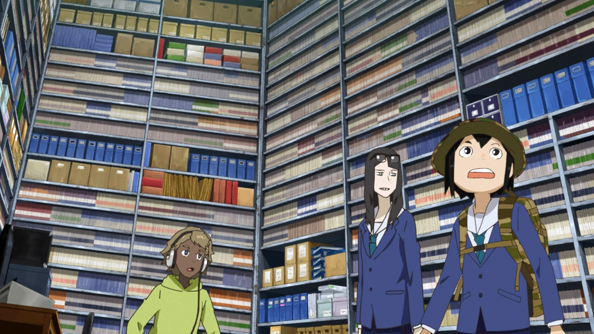 She can forsee that this production could easily drain their finances, and the student council is keeping a watchful eye, so Sayaka decides to play ball, acting both as council enforcer and interested party with the delinquent Sound Club.

She gives its only member Doumeki an offer she can’t refuse, offering protection in exchange for access to her ridiculously vast collection of sounds, plus her own expertise as audio advisor. Doumeki is also compelled to sell much of the collection for club funds, and Sayaka and the Eizouken will get a cut of that.

Sayaka can’t do it all, however. She can only create a stable enough environment in which Midori and Tsubame can work. But there’s more work than the two of them will ever be able to complete in time, so they need to delegate some of the work to a willing art club (who like the robot club were impressed by Machete Girl).

In their first meeting with the art club, Midori constantly needs help from both Sayaka and one of the club’s members to get out what she’s trying to say. She’s simply not good at telling people what to do, but if she doesn’t, there’s no giant robot anime. 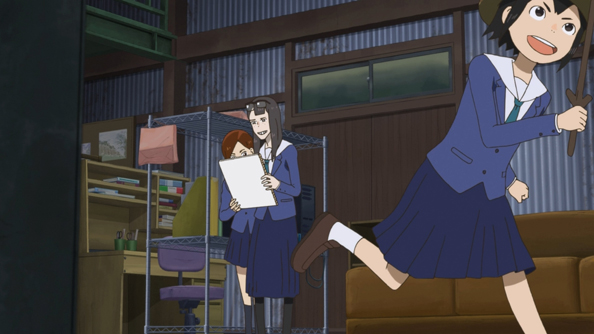 While recharging her depleted brain with some late afternoon sketching, Midori falls down a well of self-doubt, worried there’s no way she can make a robot anime that will satisfy everyone. Sayaka delivers the tough love speech she Midori in her moment of vulnerability. It’s not about satisfying everyone, but making a final product on time that she can be satisfied with and proud of.

As evidenced from their reaction to Machete Girl, Midori and Tsubame are their own most exacting critics, so it sounds counterproductive to tell her to trust in her own sensibilities. But Midori is eventually able to reconcile some of the inconsistencies (or as Tsubame calls them, “crimes” committed in order to field a giant robot anime), and regains her motivation.

Hands Off the Eizouken! has beautiful, terrifically imaginative art and a wonderfully novel way of visualizing its artists’ creations, but besides all that one shouldn’t overlook its devotion to what makes a good anime: characters you care about overcoming obstacles internal and external to achieve something great.