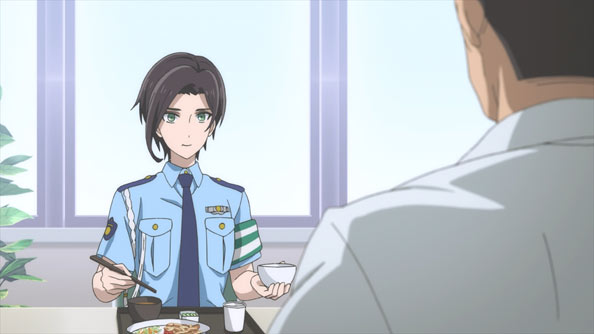 Kotoko finishes explaining the Tanio Aoi case to the serpent guardian spirit’s satisfaction: Aoi wanted the police to find the remains of a fetus she miscarried and buried in the swamp after learning of Machii’s betrayal and then learned that he was innocent. Kurou escorts her to a taxi where she falls asleep on his shoulder after he admonishes her for taking such risks.

It was odd that the showrunners chose to end this case so quickly into this episode before a new case began; it might’ve been more elegant to simply wrap up the serpent case last week. At any rate, two years suddenly pass, and we’re re-introduced to Kurou’s ex Yumihara Saki, now a traffic cop but still haunted by the supernatural things she became aware of through Kurou.

A rumor has spread of Nanase Karin, a busty idol killed by a steel beam now using that beam to attack people as the faceless ghost “Steel Lady Nanase.” Saki heard a statement from one of her victims who survived a car crash but it was later discounted due to him being under duress/in shock. Saki doesn’t deny to her supervisor that whatever caused the accident, she believes there are “beings that surpass logic and reasoning.”

She also has a nasty flashback to her traumatic incident with Kurou and the kappa that led to her eventually breaking up with him. Saki still lives every day in fear and depression, and has only become more aware of youkai and such since the breakup. That’s when she encounters Iwanaga Kotoko, who just so happens to be battling Steel Lady Nanase on the hill Saki uses to get home. 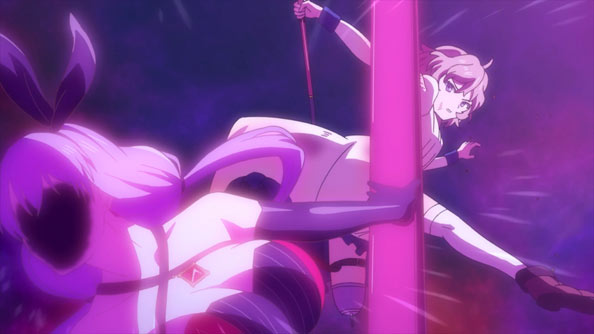 Sick and tired of being ruled by fear, Saki charges Nanase recklessly, dodges her steel beam and punches her right in the gut, only for her fist do go right through the ghost. Kotoko swoops in, loses her false leg, and delivers a solid kick to Nanase, forcing her to withdraw. Saki, a cop, was just saved from a ghost by a petite amputee in a sun dress.

It’s a lot to take in, but Saki still does her duty, not letting Kotoko slink away without treating her wounds—and in the process, hopefully gain more answers about WTF just happened. That’s when she flashes her badge, Kotoko realizes the cop is Saki’s ex, and re-introduces her as Kurou’s new girlfriend.

As this is a bit much to take after such a harrowing incident, Saki gives Kotoko a good slug to the face for her lack of tact! But despite the bad vibes surrounding Kurou, who doesn’t yet appear after the two year jump, I think Kotoko is just the person Saki needs to know at this point in time. Not just for the Nanase Karin case, but for her own emotional benefit.