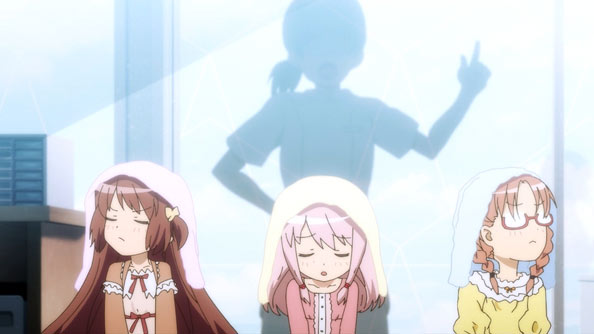 As Iroha finds herself witnessing a friendship of three girls strain against deep-seated resentment, she has another dream about Ui, this time with her two friends Toka and Nemu. The three are very smart and build amazing things together (which also make amazing messes) but Ui is constantly the glue holding Toka and Nemu together; the Momoko to Kaede and Rena.

Before Iroha can investigate the lead her new dream has provided, her new Kamihama friends Momoko and Rena have a more pressing problem: Kaede is trapped in a Staircase!

The three visit Coordinator Yakumo Mitama, who offers to “adjust” Iroha’s Soul Gem to possibly awaken more power, and also connects them with Nanami Yachiyo, the unfriendly magical girl who already warned Iroha not to return.

Yachiyo puts aside her animosity for Iroha (whom she believes to be so weak as to be a nuisance) and agrees to help the others rescue Kaede. The four have their Magical Girl transformations, all of which are very cool and very stylish. Yachiyo’s sandals and Iroha’s sheer top are particular fashion standouts.

Yachiyo and Momoko attempt to draw out the Witch by writing their names on the steps and then apologizing, and when that doesn’t work, Rena tries to apologize to Kaede, but it’s insincere. Finally she goes off on a rant about how she actually hates Kaede, and she’s sorry for “making” Kaede her friend.

That brings for the Witch and an elaborate Labyrinth of branching staircases. They find Kaede, and she and Rena eventually reconcile, promising to compromise in their relationship so that Rena isn’t always made out to be the villain. 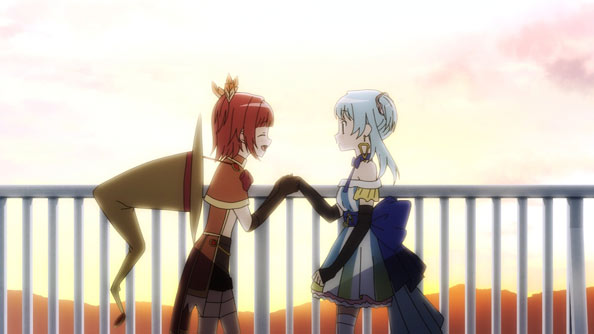 Momoko and Yachiyo detach the Witch’s core (in the form of a bell) from the Labyrinth’s summit, and Rena and Kaede combine their powers to eradicate it. But oddly, there’s no Grief Seed, which means the entity they just defeated might not be a Witch.

Rena disguises herself to gain access to the medical center, and learns that while no one remembers Ui, they do remember her friends Toka and Nemu. They were eventually discharged, though they don’t remember where. It’s the first concrete proof Iroha’s dreams aren’t just dreams. They contain truths about the past.

That brings us to a post-credit sequence in which a Magical Girl from the original Madoka series makes an appearance: Madoka’s mentor and friend, Tomoe Mami. Kyuubey has summoned her to investigate the strange goings-on Kamihama City—including the phenomenon that renders him unconscious whenever he tries to enter.

We know that Iroha interacts with a “Baby” Kyuubey in Kamihama of whom “Adult” Kyuubey isn’t aware. It seems inevitable that Iroha will cross paths with Mami at some point. As mysteries continue to be revealed and twist together, my enthusiasm for this new series grows.