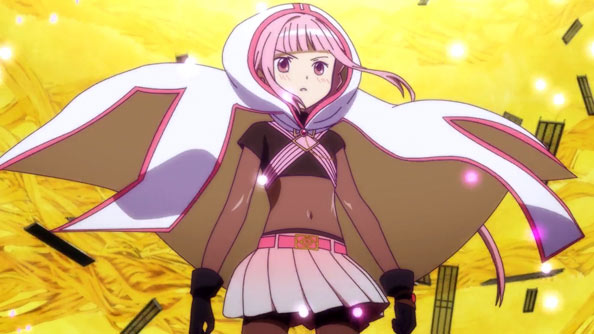 Same system, new universe. Magia Record’s English subtitle is quite clear: this is a side story, starring a new pink-haired protagonist in Tamaki Iroha (Asakura Momo). She’s an independent, reliable, somewhat lonely low-level magical girl whose school friends are unaware of her double life. Once in a while a Witch will interrupt her elevated train commute and force her into a trippy Labyrinth where she must do battle. 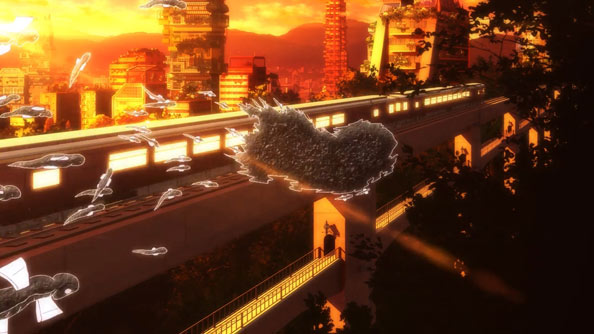 Lately Iroha has been trying to determine what her Wish was—the one Wish granted by Kyuubey in exchange for becoming a Magical Girl—but she’s forgotten, possibly due to part of the wish itself being for her to forget. Meanwhile, a number of Magical Girls are having the same dream about a mysterious girl telling them they’ll be “saved” if they go to Kamihama City. 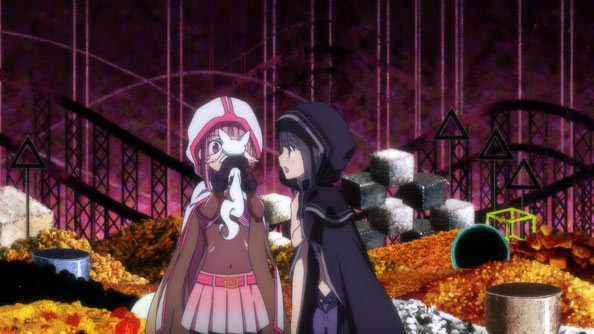 Iroha’s comrade Kuroe (Hanazawa Kana) intends to visit the city to see for herself. Iroha misses her stop and accompanies her, but on the way they’re enveloped by another Labyrinth and attacked by another Witch, this one too powerful for either of them. In the ensuing fracas, Iroha encounters a tiny, apparently younger version of Kyuubey. 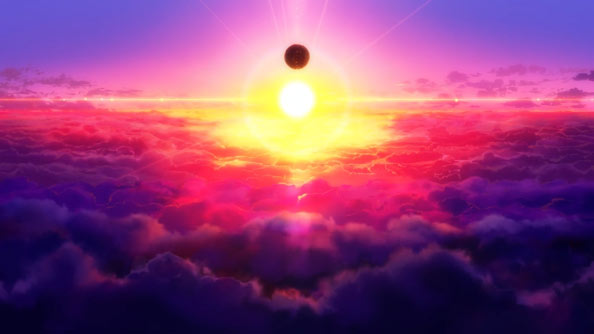 Madoka Magica’s trademark radical shifting of visual styles carries over into this series, and I can say with confidence that whether inside or outside of a Witch’s Labyrinth, this first episode looks like a million bucks. Iroha’s hometown of Takarazaki with its skinny, towering apartment blocks and hanging gardens are among the standout vistas to which we’re treated. The Labyrinth also blasts the girls high above the clouds at dusk. Gorgeous. 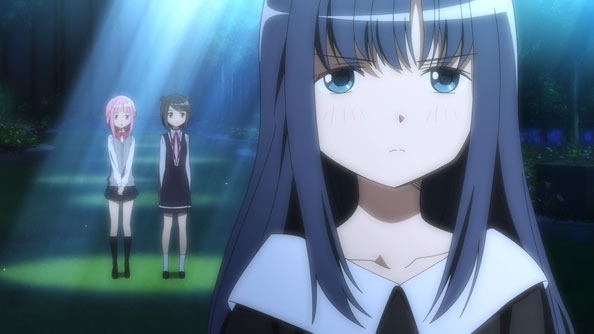 Iroha and Kuroe eventually come down to earth, crashing into a huge arcology-like skyscraper in none other than Kamihama City. Their savior is a dark blue-haired witch whose powers vastly surpass theirs, but more than anything she’s miffed to find two interlopers operating in her territory. She tells them that contrary to the dream, Kamihama is no haven for Magical Girls. There are more of them, and they’re more powerful because they have to battle tougher Witches. 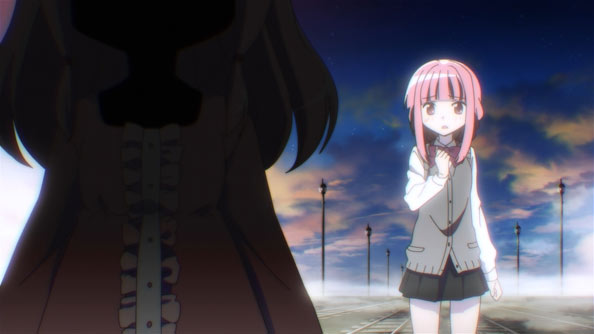 Iroha and Kuroe return home with a warning from the third girl not to return, and to discourage any other girls from attempting to visiting; they’ll be considered enemies. Iroha ends up having another elaborate dream as she watches scores of seemingly brainwashed girls headed to Kamihama, luggage in hand, assured of their salvation. Then she remembers her Wish to Kyuubey: to save Ui, an ill girl who may be her sister.

With a stylish presentation, super-cool wardrobe, stirring soundtrack, and cloudy mysteries waiting to be tackled, Magia Record looks to pick up where Madoka Magica left off, showing us the darker sides of Magical Girldom in a new setting with new players. I for one am full steam ahead on this one!