After Fumino’s improvised kiss and monologue, the Sleeping Beauty play is salvaged, but neither she nor the thorns know Nariyuki was under the cat costume. Only he knows, but was too embarrassed by the misconception that he shouldn’t have been on stage in the first place overshadowed his curiosity about why Fumino kissed him.

The festival goes on, with Rizu closer to her goal of selling 1,000 bowls but still needing another marketing boost. Rizu idly mentions how the two of them could do well if they owned a restaurant, and then slurp up the same noodle, catching the attention of a passing girl who declares them “sweethearts.” 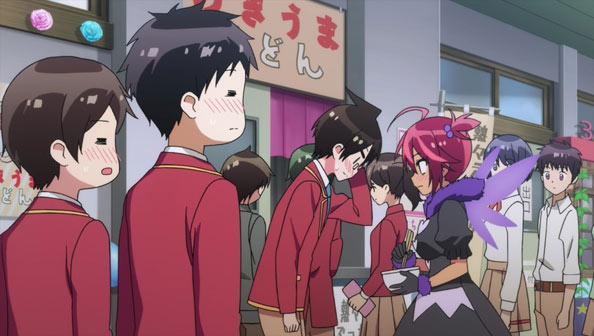 A light bulb goes off for Nariyuki, and while he and Uruka “pretend” to be a couple, Asumi tells them how any two interested people sharing a bowl will enjoy effects similar to the upcoming fireworks jinx. The crowd is initially dubious when Nariyuki and Uruka are awkward, but quickly convinced of the udon’s power when the two start behaving more like a genuine couple.

With Kirisu’s lecture a big hit despite the lack of the cat costume her colleagues got her (her turn as an idol won many hearts and minds, and allowed them to see her for the competent educator she is), and the 1,000 bowls sold, all that’s left is for Nariyuki to relax, kick back, and enjoy the fireworks. 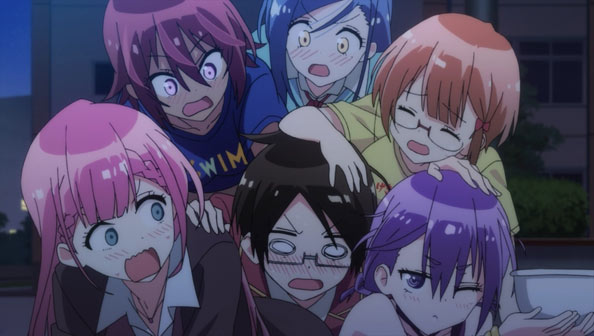 That is, of course, until the three cohorts representing the three main girls—The Thorns for Fumino, the swim club for Uruka, and Sawako for Rizu—all shove the girls from behind into Nariyuki at the same time. He then proceeds to land on the two people in front of him: Kirisu and Asumi.

While it seemed like everyone would be touching him for the big moment, the first firework is a dud. When the actual fire firework explodes in the sky, he’s holding only one person’s hand, only that person is backlit and he can’t 100% tell who they are.

At his next and final mock interview with Kirisu, Nariyuki knows what is expected of him and doesn’t disappoint, from his posture in the chair to clearly stating why he wishes to become an educator like her: to become “someone who understands the feelings of those who are incapable,” and who can stand beside those who face what they can’t do until they can.

Nariyuki Yuiga may have ended up in all kinds of compromising positions, but none of them were really of his making, only surrounding efforts, circumstances, and luck. The conceit of BokuBen is that he’s Yuiga isn’t looking for a girlfriend; through the tutoring that transitions into friendships, he’s been awakened to his true calling as a teacher.

That being said, while Nariyuki never did anything to enter into the myriad romantic-ish situations in which he’s found himself, he can’t deny that most of those times he felt something, even if other events glossed over deep analysis of those feelings. That might change when the last of those situations calls back to a crucial moment of the festival, and will be the last such moment for a long, long time.

I speak of his farewell to Uruka. Kirisu gives him one last assist when his train breaks down by giving him a white-knuckle ride to the airport in her Honda Fit (which might be a Mugen judging from the acceleration). When he runs to meet the others and say goodbye, he faceplants, but it’s Uruka who reaches out her hand to help him up.

As he looks up at her, she’s backlit, just as the girl was by the first firework. If it was Uruka holding his hand then, and the jinx is reliable, the show closes by hinting that Nariyuki may have finally realized something else besides that he wants to be an educator. As both he and Uruka stare at their hands from the air and ground, respectively, perhaps he realized who he wants to be with—whose hand he wants to take and not let go once she returns home.