As Chihaya makes dreamy eyes at Arata, wondering if he’ll be the first of them to realize their dream of reaching the highest Karuta summit, Dr. Harada has a plan. He once played Arata’s grandfather years ago when he was a young lad, and considers it a great joy to be playing Arata now.

That said, he must use every tool at his disposal to try to throw the kid off his game. That means suddenly interrupting the opening stanzas to ask that the A/C be shut off. If Arata plays in the style of water, he’ll disrupt the flow.

Harada also has a lot of intel on Arata from his other two students in Chihaya and Taichi, but that doesn’t give him the full picture of who Arata is, how his game has advanced, and how it will continue to advance even in this very match. For instance, Arata was never one to move cards at the rate he does here, but it’s to counter Harada’s strategy of hitting one side hard by making sure there’s as little on that side as possible.

Chihaya is ultimately torn over who to root for, which she takes as a sign she’s matured, since the younger her would have rooted shamelessly and enthusiastically for Arata alone.

But Arata is also glad he’s playing Harada and that he’s still playing at such a high level, since Harada was the first one to tell him he could pursue his dream of Karuta and gave him and the other two a safe space to explore it to their heart’s content.

With a Herculean effort, Harada manages to eke out a victory in the first of three matches, proving that youthful exuberance and momentum won’t always win the day—and inspiring Inokuma to rally and defeat her high school opponent.

Throughout the match, two of Harada’s peers are decidedly not rooting for him, but very much for Arata to crush him. That’s because he and Kitano were once set to win a match read by Makino Midori, Kitano’s “Madonna,” only for Harada to withdraw from the match, citing Midori’s reading skills.

It seems Midori was so angered by Harada’s slight that she ended up working her ass off to become a certified Grade 6 reader. Ironically, Harada ends up acknowledging her efforts by withdrawing from the second match altogether and banking on the third, for which she’ll be reading.

By withdrawing from the second match, Harada ensures his fifty-plus year-old body will be fresh for the third. Arata, young and spry, can only stew in anger over getting an automatic win, while the third match will carry that much more tension because he didn’t learn anything new about Harada’s game, which Harada could completely change up in the third match.

This puts Arata at a disadvantage, since he was expecting to play the second match (with the second reader). Sensing his frustration, Chihaya comes to his side to whisper advice in his ear, a gesture that’s a lot more romantically charged than it would have been were it not Arata….and Taichi notices. Will their mentor really end up blocking Arata’s best chance yet to become Master?

Welcome to RABUJOI’s Anime of the Decade, a comprehensive and hastily-researched list of the 100 best anime we watched from 2010 to 2019. We attempt to provide one brief statement about each show, based in some cases on very fuzzy recollection and possibly guesses. This list is final. No reviews, no appeals.—RABUJOI STAFF

Maybe the best representations of being transported into your younger self, and given the opportunity to save someone who didn’t have to die

The curtain is pulled back on many mysteries (though not the basement), and the Scouts must rebel against the powers that be to protect Eren and Historia, culminating in an epic Titan battle that eventually serves as the stage for the Historia’s ascension

Very few anime this decade achieved as much in a scant eleven episodes, as a circle of childhood friends grow, change, and reconnect over the loss of their friend

We didn’t know the original needed a sequel to continue Rintarou & Co.’s story—until we watched it. New faces and alliances help the mad scientist achieve what he could not in the previous show

Thrilling and at times heartbreaking pseudo-historical tales of revenge, hatred, betrayal and redemption made this the best Wit Studio offering to date to  challenge the Attack on Titan juggernaut’s dramatic hegemony

Plunged us into a previously unknown and unimaginably rich world of traditional Japanese raunchy storytelling, we go back and forth through time as some of the art’s best living performers rose to fame—and paid the costs of that fame

As the battle for the grail intensifies, F/Z’s second half elevates the tension and quality of storytelling, action, and character to even greater heights 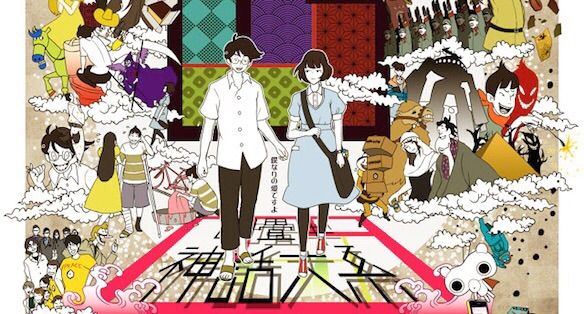 Filled with wistful tales of campus nirvana and romance deferred, resetting timelines and different clubs joined and choices made, Tatami Galaxy is a gorgeous freeform, often bizarre ride no anime enthusiast should miss

Four girls with very different personalities and paths in life all find themselves on an Antarctic expedition in a brilliant exploration of friendship, love, grief, self-exploration, and growth