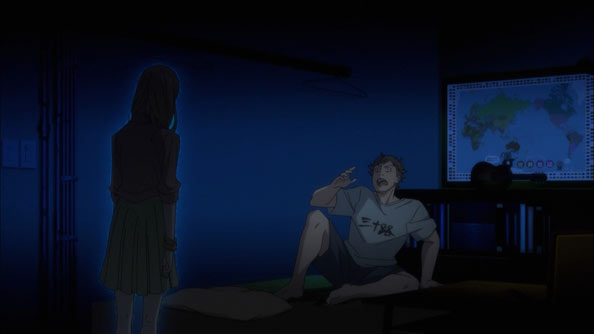 John Watson is haunted by the death of Irene Adler. He’s constantly looking at his forearm which she grasped with her blood-soaked hand. The blood was washed away, but he can still feel it on his skin. She tried to tell him something, but all we heard was “Jack.”

Ever since then, Watson is visited upon by a ghost—the ghost of Irene. We see her body in the morgue, so the show is pretty insistent that she is, in fact, dead. Her ghost seems to imply Moriarty did it, and Sherlock is next, but Sherlock just wants to be alone.

We spend the whole episode all swept up in Watson’s suspicions, which might just curdle into paranoia by the time he’s openly accusing Moriarty of being Jack the Ripper. Moriarty laughs it off and then shares the joke with the whole gang, but we share Watson’s continued gut feeling that something is not quite right about Moriarty.

Even when Watson chases Moriarty, who is following Sherlock and even pulls a knife menacingly, it’s Watson whom Sherlock begins to suspect. He told Moriarty about Irene’s hideout, because he believed and still believes the kid can be trusted. Compared to him, Watson is a stranger. Still raw from the loss of Irene, Sherlock banishes Watson from his sight..

While sharing another drink at the bar (Watson drinks a lot this week, adding to his unreliability), Kyougoku Fuyuto proposes a way for Watson to get back into Holmes’ good graces: unlock the USB drive and find the proof about Jack’s identity. The first warning sign is that Fuyuto “knows someone” who can crack the password, so all Watson has to do is steal it from Sherlock and give it to him.

Perhaps sobering up a bit in the process of finding the drive (Sherlock hid it in a baggie in a can of peaches), Watson also gets cold feet about handing over the drive, but Fuyuto insists…with a knife. Turns out Fuyuto is obsessed with being the one to catch Jack, perhaps out of a need to prove to Maki that he’s worth marrying? In any case, a struggle ensues, interrupted by Moriarty and Sherlock, the latter of whom thanks Watson.

Was the whole plan to expose Fuyuto’s true colors? Is Irene really dead, or was her death faked to draw out Jack? Like Watson this week, I thought I was on to something about Moriarty, but now…I’m not so sure about anything!