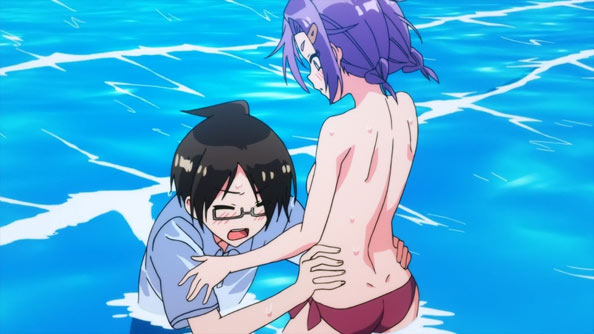 This is one of two extra episodes included with the BokuBen limited edition volume 14 and volume 16. As such, it is not must-watch TV in terms of plot. Instead, thanks to the beach setting, it’s an opportunity for all of the fanservice. Nariyuki and Asumi have been taking various lovey-dovey selfies for the benefit of her father, but when he presses them to go to the beach lest he start to develop doubts they’re really dating, well…what else can they do?

The thing is, Nariyuki can’t swim, so when a wave knocks them off their dinghy, he has to grab Asumi, and in the confusion her bikini top washes away. She wears his wet shirt until they find it washed up on rocks, along with a second, bigger bikini top, but it’s stolen by a dolphin. 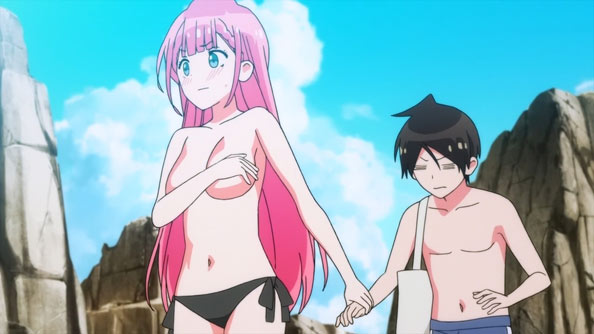 Obviously, that top belongs to Kirisu-sensei, who is at that same beach with her fellow teachers at a BBQ. She had retreated from the unpleasant social situation and, well, lost her bikini top. Nariyuki knows her top is gone for good, so stays with her until the changing area clears out. When she trips on a sea cucumber and freaks out, she leaps at him, and he smashes his glasses.

Now Nariyuki truly finds himself in the “unusual situation” his sister could detect with her brocon-spidey-sense—virtually blind and having to be led through the rocks by his topless teacher. They find a shop where the only remaining swimsuit choices are an micro bikini and a school swimsuit. Nariyuki goes for the coverage.

When the other teachers (who are dogs, BTW) spot Nariyuki and ask about Kirisu, he lies and says he hasn’t seen her. Kirisu explains her reluctance to large social events to her past as a solo competitor, viewing everyone as her enemy. Having both covered her (both literally and figuratively), Nariyuki briefly loses himself and comes out and says she’d be in big trouble were it not for him on numerous occasions.

He was trying to make a point on the benefits, and often necessity of occasionally relying on others, as she most certainly has with him, but it came out wrong. To his surprise, he doesn’t get socked for his comments; Kirisu agrees. In a way, he’s kind of a tutor for her, only on matters like this (it’s unlikely she’ll ever learn to clean properly).

Finally, the episode closes on Fumino, Uruka, Rizu and Sawako wearing swimsuits while they study, since they’re not able to go to the beach. Uh huh. Surrre, why not?! 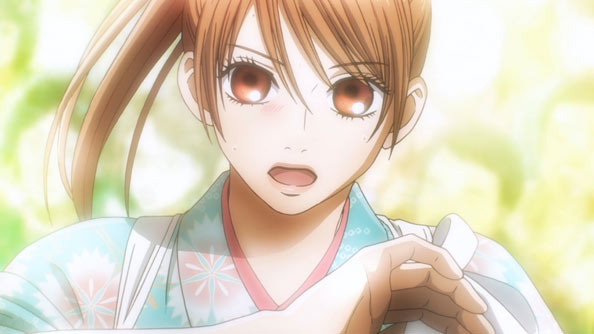 Chihaya does her best…and wins. Moreover, the match isn’t dragged out any further than it needs to. Chihaya just wins. Of course, that means Taichi loses, and we knew he was not going to be a happy rich boy about that. So he does what rich boys do when they lose…waste precious potable water!

Arata has to shut off the faucet that represents Taichi’s bitter tears. Arata thought Chihaya “belonged” to Taichi, Taichi thought she “belonged” to both of them, while Arata has realized she doesn’t belong to either of them. If they both continue to wallow in their own angst, she’ll leave them in the dust, a tailwind at her back. 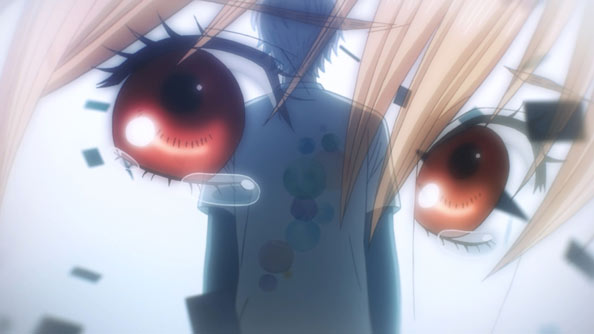 And yet, despite having slugged it out so hard to win the Yoshino Tournament, Chihaya tearfully admits to her just-arrived mom that she really wants to go on the school trip, because one day she wants to be a teacher and coach, like Miyauchi and Sakurazawa. So she goes to Kyoto, skipping this year’s Queen qualifiers. She’ll just enter them next year.

While on the Shinkansen, Chihaya learns Taichi skipped out on the trip. She keeps calling him until he answers, and he tells her he had a fever…which she buys. Maybe he wasn’t feeling well, but it had nothing to do with a fever and all to do with moving past his latest defeat, which he wouldn’t have been able to do in Kyoto (where a rich boy like him has already visited many times).

Chihaya may have the luxury of a modest future beyond the grander dreams of Queenhood, but Taichi has no such luck. This time next year, when Chihaya intends to enter the qualifiers, Taichi won’t be able to, since he’ll be studying for medical school, as his mother has prescribed. Once in med school, he’ll have no time for competitive karuta. This is his time, so he’s going to use it. It’s now or never.

Arata, meanwhile, is punishing himself for saying what he said to Taichi about Chihaya and belonging, but I maintain he was right to say it and shouldn’t feel bad. There’s way too much floating around these three that they’ve tried to keep unsaid and expressed through karuta instead, but now that they’re all competing for greatness, that’s no longer an outlet. That said, Arata has a good and caring friend in his neighbor and classmate Yuu.

Chihaya wanted to go on the class trip to make memories, but she’s distracted the whole time, first by Taichi’s absence, and then by the meaning of his absence. I’m sure a part of her feels lazy, selfish, or arrogant for even being in Kyoto when Taichi is still in Tokyo.

As Harada says during the final, results are the foundation upon which all one’s efforts are held in place. If those results aren’t achieved, the whole structure falls apart; all the efforts feel for naught, even if they weren’t.

Perhaps sensing that a strong result in this year’s Yoshino is no guarantee of similar results at next year’s qualifiers, I wouldn’t be surprised if Chihaya catches an early train back to Tokyo. Right now she has a strong wind at her back, and a strong foundation on which to build.