Since they were little, Elise has always seen herself as Melida’s little sister, someone to cling to. That hasn’t changed just because Elise’s mana awoke sooner, nor since she surpassed Melida in combat prowess. That means the both of them would really prefer if they could be on the same side…a sentiment shared by Elli’s tutor Rosetta where Kufa is concerned.

Unfortunately, when the Luna Lumiere Selection Tournament kicks off, the two are unexpectedly named Cadets and the leaders of three-girl teams in direct opposition with each other, along with two similar teams from their sister school. Both Nerva and school “queen” Shenfa join Melida’s team. 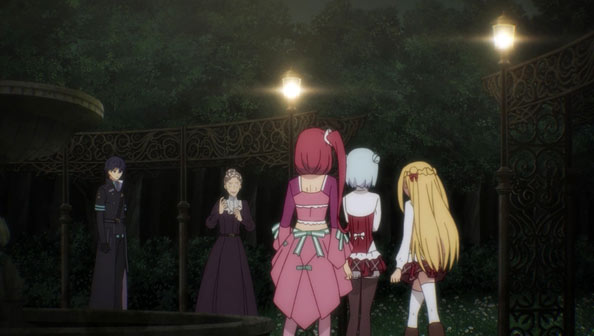 Needless to say this isn’t ideal for the girls, as Melida still doesn’t think she has a hope of defeating Elli in the inevitable one-on-one matchup. She may not be wrong, but as one of the members of the other school (perhaps the “amazing first year” people were buzzing about) tells Melida to stand tall and demonstrate her power, otherwise no one will ever trust that she has it.

Kufa tells Melida that no matter what others think (and they think her and Elli’s selection was rigged), he’ll stand with her always. But he also finds out that Elli’s maid Othello rigged the stained glass window so the two would be named the school’s cadets, which he reveals to both girls and Rosetta. Still, Melida intends to carry on; beating Elli fair and square in the final trial is the only way to change the minds of people like Othello.

However, a number of obstacles to that outcome reveal themselves. First is Black Madia, an emissary from the White Night who confronts Kufa in the forest. She wonders why his report on Melida was so sparse and whether his loyalties to their order are wavering. As far as Madia’s concerned, Melida should already have been eliminated, but to do so herself, she’ll have to get past Kufa and Rosetta, and later school security.

She can’t, so she withdraws for the time being, warning through her burning cards that “the shadow is always behind you.” Kufa tells Rosetta that Madia is Flandore’s most powerful member of the Clown-class, able to mimic all the other classes. Needless to say, we haven’t seen the last of her.

The other main obstacle to Melida’s intentions is, well Elise. Elise isn’t any more confident Melida can beat her than Melida is, and so she comes to her room in the night to announce her intention to lose to her on purpose. She clarifies that she’s not doing it for Melida’s sake but for her own: she wants to remain her “little sister”, and beating her in public is the last thing she wants to do.

This doesn’t sit well with Melida, but fortunately she has a week to change Elli’s mind, either through words, or more convincingly, through her actions during the tournament.