Iruma-kun is a 14 year old boy who has a hard time standing up for himself. You see, his deadbeat parents have sell him to pay the bills. Recently, they even sold his soul to a demon. Fortunately, that demon just wants a grandson.

Unfortunately, ‘Grandpa’ is the director of a demon school and goes out of his way to skwee and show off his lovely grandson (now honor student) at the entrance ceremony. This immediately gets Iruma dragged into a duel, which he wins due to ‘infinite defensive capability’ after years of working on a tuna boat, and other traumatic things.

Iruma also pulls off this season’s second german suplex! Who knew that would be a thing in anime this fall? Regardless, this sudden turn of events is both funny and fortunate, as it prevents a female student from being injured in the fight.

Thus, having won a powerful subservient demon via his first duel, and the adoration of the student body, Iruma seems pretty set up for a season of light-hearted humor, bright colors, good enough action, and maybe even some harem building? While none of that is particularly unique, I found it charming and look forward to whatever nonsense comes next.

Looks like I got in just under the deadline in time for episode 1 of Fate/Grand Order: Absolute Demonic Front – Babylonia, which I will review soon. I wanted to make sure to catch Episode 0 for the same reason I watched El-Melloi II Case File’s Episode 0: to gain some context so I wouldn’t be too confused when the main show commenced.

Episode 0, also titled Initium Iter or Beginning of the Journey, starts simply, with a demi-servant experiment seemingly going wrong, as the servant is only awakened within the human subject for a short time. In that time, the subject is suddenly transformed to a Shielder-type servant, and tries her best to break through the multiple bounded fields that protect the researchers.

That subject is Mash Kyrielight (Takahashi Rie), a designer baby with a shortened lifespan, and her primary physician at the Chaldea facility is Dr. Romani Archaman. Initium Iter focuses on the start of their relationship, as Romani is one of her only connections to humanity.

The rowdy servant that still dwells deep within her could make Mash a time bomb in the wrong hands, but Romani is committed not just to maintaining her physical and emotional health, but teaching her what it is to be, well, a person, not just a vessel.

When some kind of singularity is detected which will cause “the history of all humanity” to cease to exist by 2016, the Rayshift experiment is proposed and approved by the UN, and Mash leads a group of “spiritrons” whose mission is to travel to various points in history and “intervene in matters” with the overarching goal of making sure humanity has a future.

This prologue doesn’t really go into great detail about the mechanics behind this mission, and we only see various glimpses into the adventures Mash goes on, which presumably comprise the content of the main series to come. Suffice it to say a lot happens (or will happen), there’s a lot of characters involved, wearing a lot of elaborate outfits. 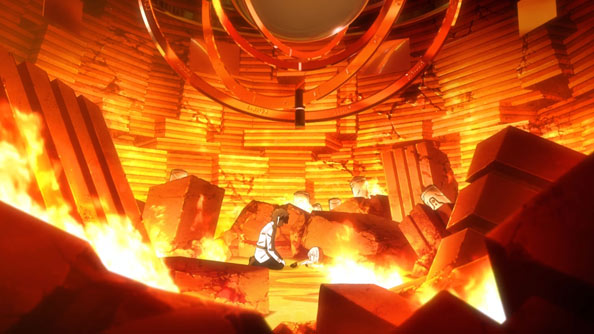 Romani makes Mash aware from the start that she may only last eighteen years at most, but Mash is accepting of that span, and like him, hopes to make the most of it. Eventually she is able to leave the clean room that was her world for years and walk about the Chaldea facility as a fellow researcher.

At some point, some kind of calamity befalls Chaldea, and seemingly only two people survive the devastation: Mash, and a young lad with black hair whom we see interacting with Mash as a comrade in arms, companion, and perhaps more. With that, the beginning ends, and their journey begins in earnest.

This is the story of Akutsu Takuma, who is huge and scary-looking and thus is always likened to an akuma or demon and ostracized. In reality, Takuma is just as scared of people as they are of him, and prefers to live and study alone.

And yet, after a discussion among class boys about the school’s three most beautiful girls, Takuma comes home to find not just those three beautiful girls (in the middle of undressing no less) but five other women of various ages, all of whom have the same last name Saotome which isn’t his. He doesn’t like this situation, but it’s been this way for some time.

Val x Love makes an interesting choice to ease us into its supernatural elements by first presenting everything mundanely, and offering only hints as to what the Saotome sisters really are, why they alone don’t fear him, and why Takuma has allowed them to take over the house he inherited from his departed parents.

What is prevalent throughout the episode are references to a spate of recent “suspicious attacks” that many attribute to akuma; but until one actually appears, one could imagine people were only being superstitious (if you didn’t watch the OP, that is). In reality the attacks are being caused by summoned demons, one of which Takuma encounters when he’s out shopping with the second-youngest sister Natsuki, on the orders of the second-oldest, Ichika.

The other sisters gather on the roof to watch the result. Turns out the nine of them are Valkyries of Valhalla, brought to Midgard by Odin to save humanity. Because “love is the source of a maiden’s power”, the more they are loved, the stronger they are. Natsuki was chosen by the others to level up first, and after Takuma is wounded saving her from falling debris (not the first time that’s happened), she disrobes, has him massage her breasts, and kisses him.

In a massive flash of heavenly flame, the giant akuma is utterly eliminated, and for a few moments we see Natsuki in her Valkyrie form as Siegrune, The Blade, before passing out in Takuma’s arms. This makes Takuma Einherjar (named after those who died in battle and go to Valhalla), here the lover of the nine Valkyries appointed by Odin to raise their levels.

If that all sounds like a lot of poppycock, I’m here to tell you…it’s not the worst? I was expecting more comedy from a show that had it among its genres, but it mostly arose from the fact such a large brute as Akuma is so intimidated by everyone, and yet has what in his case is a case of very-unlucky lechery. The akuma designs are marginally striking, while the action was brief but convincing. High marks also go to Technoboys Pulcraft Green-Fund, who composed all of the music.

For those who see the Valkyrie angle as just another excuse for a lame harem, consider that Takuma’s strong reluctance to have in one feels more genuine than most harem MCs. His introverted personality and public perception that constantly feed his self-loathing make him a sympathetic lead. As he is the source of love that powers the Valkyries, they too could fuel a transformation in him from someone who only hopes to become a quiet, respectable person to something far greater.